We owe a very big thank you to everyone in our determined and wonderfully professional team who came in without fail all last week in the most testing conditions.   It was colder here than anywhere else in the North but they kept everything going to the usual very high standards and we are so proud of them all.

Both the gallops were operational throughout the very cold temperatures thanks to James’s sheer determination, harrowing the frozen ground himself from before dawn till midnight each day.

We had a very steady stream of trainers lucky enough to benefit from his efforts from all over Scotland and the North of England who have not been able to use their own gallops.   They know that any surface offered at Craig will be safe for their horses.

Gemma battled in horrible conditions to  take I am Dandy to run for the Craig Farm Syndicate  in the last race at Newcastle on Friday evening 1st February only to find that after running four races they abandoned the last three. Surely they must have known the weather was more than likely to deteriorate before the end of the evenings racing?!  It was not fit for her to drive the lorry home and so she stayed the night but to cap it all the powers that be at Newcastle Racecourse closed the stable staff canteen so they could not even get anything to eat.   Staff welfare is of paramount importance and this was a very sad lack of interest and caring which given the circumstances is very surprising and disappointing to witness.

We did take advantage of the weather and lack of racing as our vet Urs Schaeli came in and vaccinated the horses which was a wise precaution as some influenza outbreaks have been recorded.

We had John Grossick here in the snow and one of his photos appeared on the front page of Racing Post on Thursday 1st February. We also have great support from the Eskdale and Liddlesdale Advertiser and they included our previous blog in last week’s issue – all good publicity for the yard.

We were delighted to read about Avidity’s success in his first affiliated dressage competition with Rachel Robson and this was reported in Horse and Hound on the 31st January. Avidity who was owned by Jim Gordon won five times and has made the transition from racing to dressage very easily and he is now being aimed at Retraining of Racehorses classes.   It is always good to hear about our retired racehorses enjoying a new career.

Briony is continuing to have fun with the Fell ponies and as well as helping the young horses in the yard she has been competing. Both sisters are now qualified for the Greenland Working Hunter Championship in March. 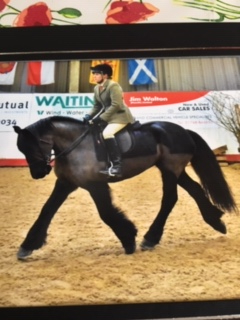 We did manage to run Charmant at Sedgefield on the 27th January in the 2 mile Brian Ellison Racing Club Chase before the cold snap set in. Ridden by Brian Hughes with top weight, he again jumped fantastically but was never really travelling on the drying ground. However, he was only beaten by four lengths into fourth place.   Softer conditions and a more galloping track will suit him much better.

It was sad to see that Musselburgh lost its big meeting to the weather, especially after the build-up on Racing TV’s feature. However, this meeting has been rescheduled for Sunday 10th February andthere is also another extra day at Musselburgh on Wednesday 13th February.   In this extraordinary winter it was remarkable to see so many withdrawals from the Dublin Racing Festival at Leopardstown because of good going!   However, it was heartening to see La Bague au Roi plunder the Grade 1 Flogas Novice Chase for Warren Greatrex under a bold ride from Richard Johnson.   She is now unbeaten over fences and this was her second Grade 1 victory.   Together with Apple’s Jade’s impressive win this was definitely a weekend for the mares.

Looking ahead to warmer times, our Owners’ Day this year will be on Sunday 1st September 2019 so please put this date in your diary.

We have more entries next week including Ayr, Kelso, Newcastle (AW) and Haydock so let’s hope the improvement in the weather continues.