The dry spell continues and trainers nationwide are being hampered by the current conditions.

At Newcastle on the 9th November we had two flat runners on the all-weather. I am Dandy ridden by Nicky Mackay ran another excellent race in the 1 mile Handicap and was only beaten by a length into third place.   He really does deserve to win but it is fairly hard on a three year old not receiving any weight allowance and mostly he has horses twice his age beating him.   This suggests that as he grows and strengthens up again we could have a lot of fun.   We feel he should have a bit of a break but he has come out of this race exceptionally well and to show his well- being, he deposited his rider on the Tapeta last week!

For Three ran in Division II of the 1 mile Handicap under Jack Garrity and was far too keen over the first 200 yards. He did not settle and appeared to hold his breath and so didn’t really finish his race. He has schooled well and jumping could help him to relax.

The next day at Kelso on the 10th November we ran Aristo du Plessis (Paddy Brennan) for the second time over fences in the John Wade Chase (2m 1f).   Although his work at home had pleased us, it was clear early on that he was not enjoying himself and not really attacking the fences.   He has come out of his race absolutely fine and so we will now revert to hurdles.   Not all horses take to chasing and also he has come back from injury and sometimes it takes a little while for them to realise nothing hurts.   When he is in top form he really wears his heart on his sleeve so he has to feel confident to give of his best.

Civil Unrest definitely does enjoy jumping fences!   In the 2m 1f Handicap Chase at Kelso he ran another superb race under Steven Fox and only just got a little tired on the run in to come an honourable second beaten by 1 ¾ lengths. He appears as good as ever at 12 years old but with the extra 2 lbs and furlong at Kelso he may just have been at his limit.   It is encouraging to see him come out of his races so well and he is a wonderful horse to have in the yard. 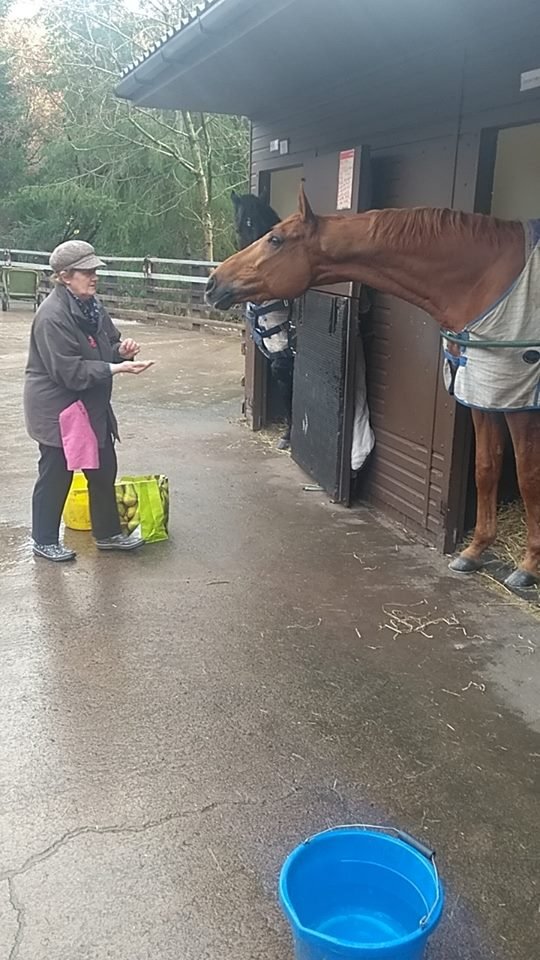 Civil Unrest enjoying a generous amount of polo mints from owner Sheena Kirkpatrick.  Is this the secret of his continued good form?

On the 17th November at the first jumps meeting at Newcastle we ran Empire de Maulde ridden by Brian Hughes in the 2m Novice Hurdle.   He ran a bit keenly and was green hanging away to the horse on his right in front and came in third.   Brian suggested a ring bit next time.   However, he mainly jumped very well and will make up into a very nice chaser in time. The ground was plenty quick enough for him and he will now qualify for a handicap mark.

In the concluding Bumper at Newcastle, Look Now ran for the Craig Farm Syndicate with Lucy Alexander up.   Lucy had just enjoyed a good win earlier on the card with the veteran chaser Jet Master. Look Now is a very nice prospect, well selected and purchased by Gemma Anderson and he has done everything pleasingly at home. The tactics of the race with everyone crawling for three quarters of the race did not play out to his strengths.   He was doing his best work late on to finish 5th and then taking half a circuit of Newcastle to pull up! Perhaps we should have kicked on earlier but he also needs to learn the right way of racing. He has schooled very well and is for sale.

Daina received the very well deserved best turned out in both races.

At the Cheltenham Evening Sale last Friday 16th November, Bobby O’Ryan bought two horses on behalf of James.   Sally went to see them after they arrived off the lorry on Sunday.   Fostered Phil came second in an Irish Bumper at Clonmel for Paul Nolan in October and Honourary Gift won a Bumper at Sedgefield for Richard Fahey also in October. They are both for sale and look very interesting and exciting types who all being well will go straight into work and be out on the racecourse by the New Year.

They were certainly very pleased with their new five star accommodation with deep beds and cozy rugs and they immediately tucked into their high quality hay.

There was a fascinating interview with Bryony Frost in Sunday’s Racing Post and well worth reading for her frank and fresh approach to dealing with the media. Particularly thought provoking was her determination to refuse any media training.   She wants us all to see ‘the world through my eyes’ – no spin, no gloss – just Bryony.   Racing could do with more of that please! The bond she has with her horses is her absolute passion and paramount to her success.   Those of us closely involved with both dogs and horses will certainly agree.

Weather permitting, we hope to have runners at Hexham and Catterick this week