On Tuesday 23rd we ran Empire de Maulde for the first time in a Juvenile Hurdle at Wetherby where he came fourth. He is a big, well-bred horse who still has a great deal of maturing to do and the race was not run to suit. He would have preferred more pace and possibly better ground, but his jumping first time out was full of promise he is a very nice horse for the future. 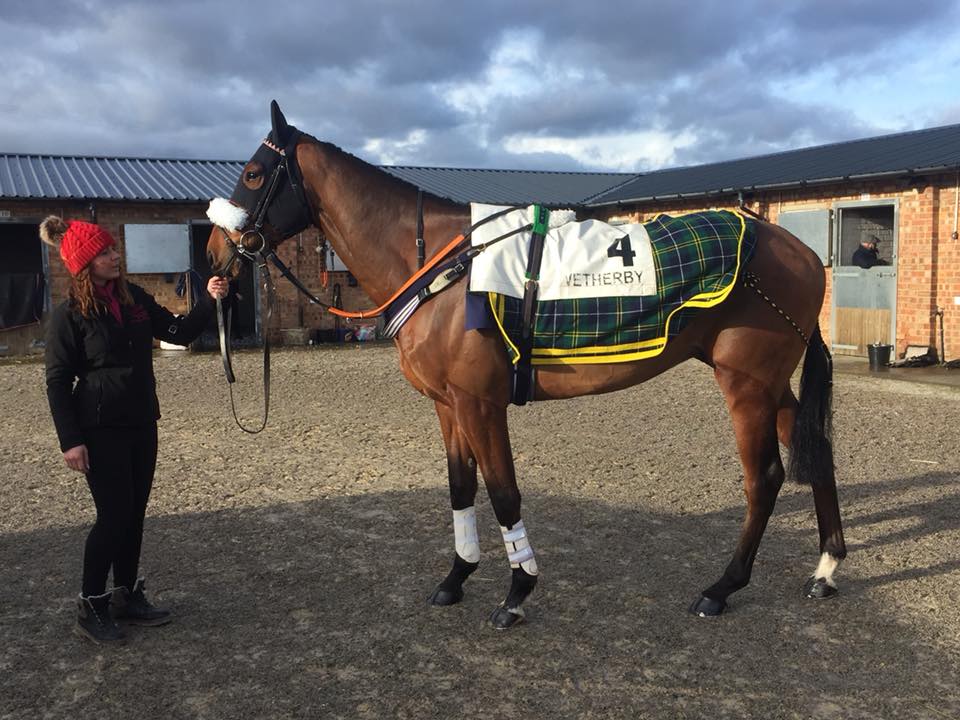 On Wednesday 24th at Catterick Bering Upsun ran for The Craig Farm Syndicate in the 1m 7f Handicap Hurdle. He was given a super ride by Steven Fox and ran a much improved race to be second to a well handicapped Derrynane.

On Thursday 25th at Kelso the ground was very hard work and it was a day for course specialists.   This suited Un Guet Apens who ran in the 2m 2f Amateur Riders’ Handicap Hurdle with Kit Alexander. Over a trip short of his best they set off boldly in front and were only headed between the last two flights bringing Getty’s record at Kelso to 2212.

Obviously by the end of the day the ground for both divisions of the Bumper was very testing indeed.

In Division 1 Conor O’Farrell rode Strike the Pose for The Craig Farm Syndicate. He anchored her at the back of the field where she settled well but sadly could not pick up in the conditions and was placed fourth. We also ran Into the Breach who is a weak horse yet but is well- related and a long term project. He was not suited by the slow early pace and was then outpaced when they quickened.  However, he is learning his job and we hope will be a future staying chaser.

In Division 2 Conor rode Drenek for James Westoll on his first ever trip to the races.He is a lovely big scopey horse and certainly another chaser in the making. After behaving well in the paddock he surprised us by refusing to settle on the long run down to the Bumper start which sadly took its toll in the race. However, he will have learnt a great deal for the experience.

There was fitting tribute on Saturday at Cheltenham for Richard Wollacott who sadly died this week and a fund has been set up by his wife Kayley with proceeds going to MIND, Devon Air Ambulance and IJF. Stef Keniry donated her bto and Harry Fry also gave his share of prize money won at Cheltenham to the fund. There is much crucial work which needs to be done for those suffering from mental illness and it  was a very brave decision to run Beer Goggles in the Cleeve Hurdle.

On Saturday at Doncaster Henry Brooke rode Durbanville in the 12:55 2:3 H Hurdle.

Entries so far next week are at Newcastle on Tuesday and Ayr on Wednesday.