Pirate beats the Beast from the East… Intrepid and gallant Briony set off in freezing temperatures for Ayr on Monday where we had three runners and it was great to have a winner before the Beast from the East hit the country. Black Pirate followed up his impressive win at Wetherby in the Conditionals/Amateurs 2m NH Bumper. It was only a field of three, but he was given a well- judged and patient ride from Steven Fox and won very easily. Now unbeaten in a Point-to-Point and two Bumpers, what an exciting prospect he is. We also notched up another bto.

Sky Full of Stars with Henry Brooke gave another solid performance to be fourth (beaten four lengths) in the race he won last year off 10lbs lower, so he is still in the handicapper’s grip and suffering slightly because of his consistency.

Durbanville went off favourite for Richard Johnson but could only manage a 5th placing and he possibly does not see out the 3miles.

With the weather as it is now, how very lucky we were to be able to race on Monday. Sadly so much is now being lost.

Neil and Sally have lived here now for 40 years and they have never known such hideously freezing strong winds combined with the extensive snowfall and it has been a massive endurance test for everyone but despite everything the horses here in their snow topped chalet-like stables are as warm as toast, safe and well and enjoying the pretty scenery!

Winners are so important in our work of course but the latter part of the week the priority has been more about safety and survival - keeping animals fed and watered in metre high drifts with buckets frozen solid and abandoned cars. The message was only travel if you have to, but our team see the horses as their priority and have made extraordinary efforts to get to work and keep the animals happy and healthy. Everyone in the sport has to make sacrifices for the horses and our passion is our profession which is never going to be a 9-5 stereotypical living. So hats off to you all! 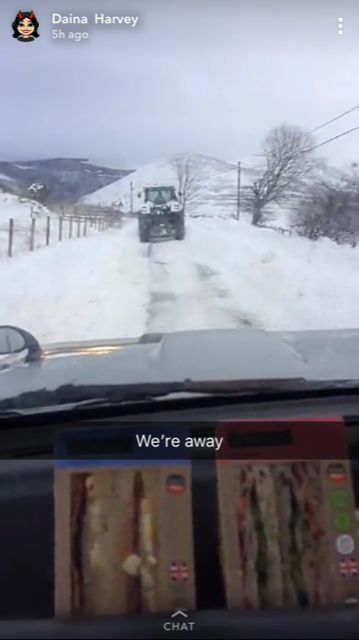 Focus on the up and coming...

We are going to do a regular feature on the impressive stock waiting in the wings who you will not have seen on a racecourse yet, but can be put into the notebook to follow. We often have ownership and share options in these newcomers so please contact the office for any further details. 01387370707

Cellar Vie bred by Will Ewart Cellar Vie a phonetical version of the French C’est La Vie (‘that’s life’) and a half- brother to Sa Suffit (‘that’s enough’), Plus Jamais, Saviero etc. Broken in at our satellite yard in Middleham with Barry Keniry he is now back at Craig Farm. Starting pre-training, he displays a characteristic of his brothers who were also produced here - a cheeky nature! Naturally athletic with plenty of presence he is by Tikkanen, a Sire we have used quite a lot over the years who is the three parts brother to decent French Sire Turgeon.

The severe snow made it as good a time as any for vet Phil Dyson to MOT the horses. There are always some useful findings with his depth of knowledge in the day to day management of issues with training thoroughbreds. Comfortable, pain free horses eat, well train well and run well. Phil and his team’s work have undoubtedly helped add to the winning roster.

Almost a full team today and morale is high with James digging them out on route to work in the tractor this morning and everyone into one jeep Hope everyone has remained safe.