Only three runners since our last update but two winners! Only three runners since our last update but two winners!

What a brilliant result at Doncaster on Saturday with Ettila de Sivola winning the concluding race of the two day meeting, the Betfred Juvenile Bumper beating favourite Skyline a head with Malinas Jack a head behind in third and the form horse Zoltan Varga two lengths back in fourth making for a very exciting finish on a darkening Knavesmire.

An inspired ride from the recently relocated Conor O' Farrell. The south's loss is our gain and he took the initiative with a lack of early pace and all credit to Ettila De Sivola who responded to every call digging deep in a well fought out finish. He has no right really to be performing with these racier type flat-breds at this stage as he is a huge scopey horse with an AQPS (non- thoroughbred) pedigree so it shows he has got some class. He will be even more effective over further and he schools very well - an exciting horse. There were also some very thrilled breeders, producer (and filmer!) watching our live WhatsApp video in France along with owners in Yorkshire, Australia and an Ayrshire taxi!  And a big thank-you to Betfred and also Christopher Miller for their sponsorship and the lovely silver salver, a great memento to have.

We had one runner on Wednesday 6th at Haydock  - Un Guet Apens who was back over hurdles.   He travelled and jumped well but on a flat track over hurdles could not stick with the leading group up the home straight but good to get another run into him before a Christmas chase raid.

Great to have another winner on Friday with Charmant scoring in good style at Sedgefield for Andrew Phillips and the Sperlings. However, this was not a very strong field of maidens over timber and we hope the handicapper takes this into account.  This is Andrew’s third winner on the bounce as an owner and some small recompense for The Wise One injured last week - race horse ownership really does favour the brave!

Steven Fox rides Charmant out every day and has done so for two seasons now. He not the easiest horse but they have become a great partnership and the horse was very professional throughout , settling well  and helped by the reasonable early pace set by the Irish raider.

In the end it was done impressively and he will also be a good Novice Chaser in time.

We have an interesting new recruit from Corsica! We leave no stone unturned in our hunt for the next potential star and Empire De Maulde (Below- by Spanish Moon who is an up and coming sire in France) has won four out of his six races on the little island of Corsica and been placed second and third in the other two. He arrived in November and has settled well and is a great jumper and is very professional in all his work. Please look up his full details here in our Horses For Sale section. 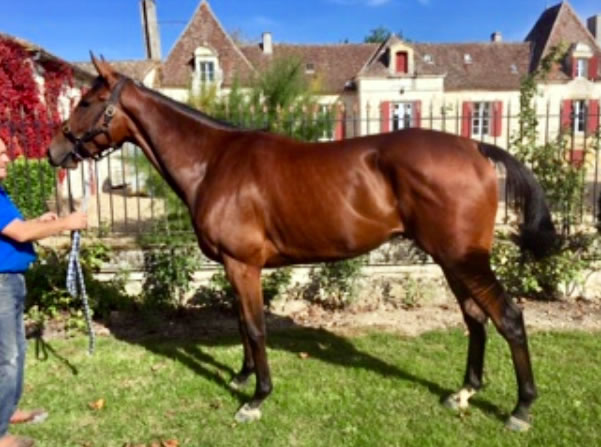 We are keeping a very close eye on the weather over the weekend and next week as the forecast is not good.  All being well we have runners at Wetherby, Kelso and Huntingdon over the weekend and entries during the week at Uttoxeter, Ayr, Hexham and Newcastle. So a very busy time ahead….