Hizzy's Blog No 2 - From Sedgefield to Stuttgart 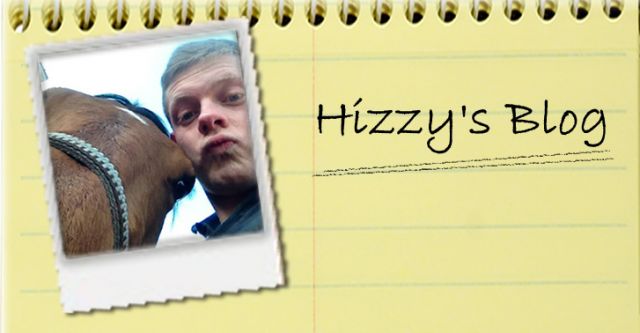 ‘Some people think that Horse Racing is a matter of life and death… I can assure them that it is much more important than that.’ - Ross Hyslop 2016

Ok, maybe a slight twist on the words of the immortal Bill Shankly…

Welcome back to my weekly blog, Episode 2 of a never ending drama/comedy/action/documentary, which if screened by Channel 4 would have to be shown after 9pm and be compared more to ‘The Inbetweeners’ rather than ‘The Morning Line’… especially after last weekend’s antics in Stuttgart.

It’s the most wonderful time of the year!!! No it’s not Christmas, it’s the Champions League of Jump Racing, the best of the best - the crème’ de la crème (as our French horses would say)… It’s the Cheltenham Festival.

4 days of the best jumps racing in the world kicks off on Tuesday and I personally cannot wait! Whether you are there for the Guinness, the craic, the atmosphere and the buzz, this is the highest quality of jump racing, and to see some of the best horses on the planet making history, or quite possibly all of the above, and then Cheltenham is the place to be.

Some of the team here were lucky enough to attend a sold out Cheltenham Preview event at Langholm Rugby Club, where our very own James Ewart was on the panel alongside Jim Goldie and Iain Jardine and hosted by Gordon Brown (racing presenter, not the ex-prime minister). From what I’ve heard it was a great success and well done to all involved in organising a fantastic night.

For those of you who could not make it to the Rugby Club then do not fear!! Starting with Tuesday’s highlight, The Champion Hurdle, I’ll give a short preview on the big race each day and give the selection from our very own panel here, Mr David Macleod (Head Lad), Ross ‘Hizzy’ Hyslop (Racing Secretary) and the man himself, Mr James Ewart (Trainer). Adding bit of fun to the action there will be a scoring system in place, with 3 points for a 1st place, 2 for 2nd and 1 for 3rd. With a box of sweets at stake, so make sure you comment on the Facebook page with your predictions to get involved.

The highlight of the Festival for many racegoers is the Feature Race on Day One, The Stan James Champion Hurdle, and as ever we will see a top class field line up. The compilation of the race has changed completely in recent days as the first two finishers in last year’s contest, Faugheen and Arctic Fire, have been ruled out through in injury.

Top Mare Annie Power is now heading the market but as she is not currently entered for the race Willie Mullins and owner Rich Ricci will need to supplement her at a cost of £20,000. That looks increasingly likely and her seven pounds mare’s allowance certainly makes her a strong contender.  Nichols Canyon is a multiple Grade 1 winner and beat Faugheen earlier in the season at Punchestown. Very heavy ground took its toll on him when he tried to make a race of it with Faugheen in the Irish Champion Hurdle at Leopardstown.

The Henry De Bromhead trained Identity Thief is a progressive sort and put up a decent performance to win the Fighting Fifth Hurdle. He was subsequently beaten two lengths by Nichols Canyon at Leopardstown over Christmas and he certainly comes into the equation again.

My Tent Or Yours hasn’t been seen for two years and looks poor value off such a long layoff since his defeat at Ayr in the Scottish Champion Hurdle. He was a top class performer but it is a huge ask to expect him to reproduce his best form after such an absence.

The New One has been supported since the defection of Faugheen and while he is likely to place I would be tempted to take Identity Thief for the value bet here at around 5/1.

The 2m Queen Mother Champion Chase, is a ferocious test of speed, stamina and jumping ability where only the classiest prevail.

Sprinter Sacre put the disappointment of pulling up in that Champion Chase behind him with a defiant second to Special Tiara in the season-ending Celebration Chase at Sandown, and he's two from two this season. Then there is last year’s Champion Dodging Bullets who proved himself the best of his bunch three times in succession last season: in The Tingle Creek, The Clarence House and The Champion Chase but was second in his prep race at Newbury earlier this year. It’s understandable why Un de Sceaux is the current market leader but is he bomb proof? Unseating Ruby Walsh for the second time in 6 starts on his return at Leopardstown but was then impressive when beating Sire De Grugy by 5 lengths at Ascot in the Clarence House Chase, a horse who won this race in 2014.

Gold Cup fancy Vatour is also entered in this race but seems to be entered in everything from the Gold Cup to the Langholm Badminton Ladies Singles.

In this 3m staying hurdle the stand out horse is Thistlecrack. The horse is hugely clear on the rest of his rivals based on this season’s form and will take some beating. Defending champion Cole Harden took this race is fine style last season winning from the front, but the horse has had two starts this season and has been disappointing on both occasions.

Paul Nicholls has 2 very handy horses in the form of last year’s second place Saphir Du Rheu and the lightly raced Aux Ptits Soins but I can’t see past the short priced favourite Thistlecrack who is bred for this stiff stamina test.

The Timico Cheltenham Gold Cup is the jewel in the crown of the National Hunt season. It is run over 3miles 2 furlongs and 70 yards it is the ultimate staying test and in this year’s renewal it may well be those last 70 yards that decide the winner, as it would appear to be a competitive renewal of this race. Who will follow in the footsteps of the greats that have landed this prestigious prize such as Kauto Star, Denman and Best Mate, to name but a few of the more recent champions?

Willie Mullins has a strong hand this year with second favourite Vatour who has 2 previous festival wins under his belt (Supreme Novices & JLT Hurdle), along with last year’s second place Djakadam, and last years RSA Chase winner Don Poli, who is 5/6 over fences.

George Elliot Trained Don Cossack is the current market favourite. He had been impressive on his first two starts this season in Ireland before falling at the last in The King George at Kempton on Boxing Day when he appeared to have the measure of eventual winner Cue Card, who also could be there or there about at the finish, going by this seasons form, but his stamina being the only worry for me.

Alan King’s Smad Place was an impressive winner of the Hennessy and the Betbright Chase this season, running below par in The King George in between.  There is depth in yet more viable contenders in the form of Road To Riches, Holywell and Carlingford Lough. Road To Riches was disappointing last time out in the Irish Gold Cup when he should have finished third behind Carlingford Lough but for the fall of Valseur Lido at the last which promoted him to second. This looks like a very strong Gold Cup and one which is certain to be run at a decent pace set by Smad Place and Vautour .They look like setting the race up for Don Poli, who I think can prove his class and exceptional stamina.

Unfortunately last Saturday saw Rocklim unseat Lucy Alexander, after making an unfamiliar mistake at the fourth. Thankfully both are well and we have entered Rocklim at Ayr this Saturday, so hopefully he can use last week’s word – bouncebackability and bounce back to winning ways rather than bouncing Lucy out the saddle.

In total we have 13 entries at Ayr over the 2 day meeting. With 3 entered today and 10 entries on Saturday, hopefully the ground will be good enough for us to take our chances and come back with some winners form the west coast. From Calach who could have his 1st ever run in Saturday’s bumper, to Sa Suffit who could be having his 27th run for the yard, we certainly have some exciting prospects which are very dependent on going, of the hallowed turf of Ayr.

Elsewhere we have 2 entries at Sandown as Ascot De Bruyere and Leading Score look to raid the South after both being entered in the Class 1 National Hunt Novices Handicap Hurdle at 2.00 on Saturday.

Then on Sunday it’s Kelso’s rearranged fixture, where we have 4 entries and hope to support which I’m sure will be another great days racing at the Border track. Unfortunately though at the time of writing this it’s too early to say which horses are going where, as the big man up there who has an eagle eye view of all the worlds racing is the one who decides on the going. So can I ask you all to please pray for some sunshine unless the mud loving Snuker is due to run, who to be honest we should only ever run in Langholm as it never stops raining here.

Well it’s safe to say that Stuttgart was an absolute riot and even when writing this 2 days later I’m unsure if I am genuinely ill or if I’m just still hungover. People must be wondering who the confused zombie is that’s walking around the yard, occasionally spouting the odd German phrase to an even more confused looking horse. The 10 Dumfries lads hit Stuttgart hard but my oh my, it hit us back twice as hard. As much as I’d like to go into detail about each story, I’ve been instructed that ‘what happens in Stuttgart Stays in Stuttgart.’ Enjoying several alcoholic beverages, a trip to the football and enjoying some of the local cuisine, everything in-between is just a ridiculous blur that I probably don’t want to remember and that you probably don’t want to know. However if you feel brave enough then you can always message and ask about Jordan’s (the stags) struggles in airport security, what one of the lads spent 400 euros on in the 1st night, some of the issues someone had with one of the local woman, or what was actually in some of the 12 shots the stag had to drink in a row then please do not hesitate to contact me. 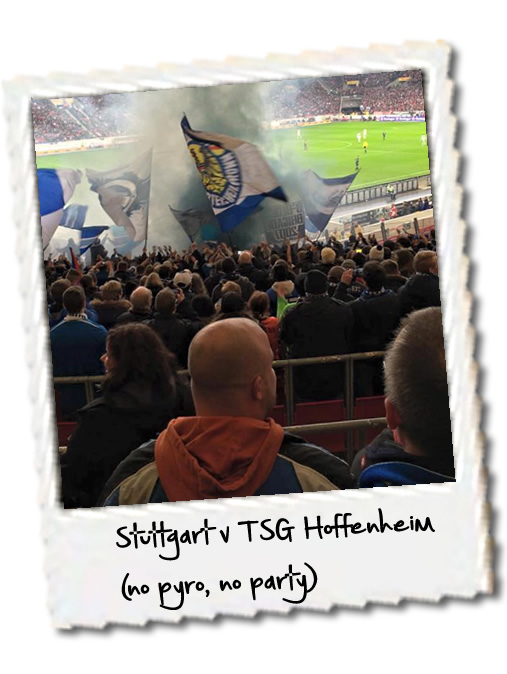 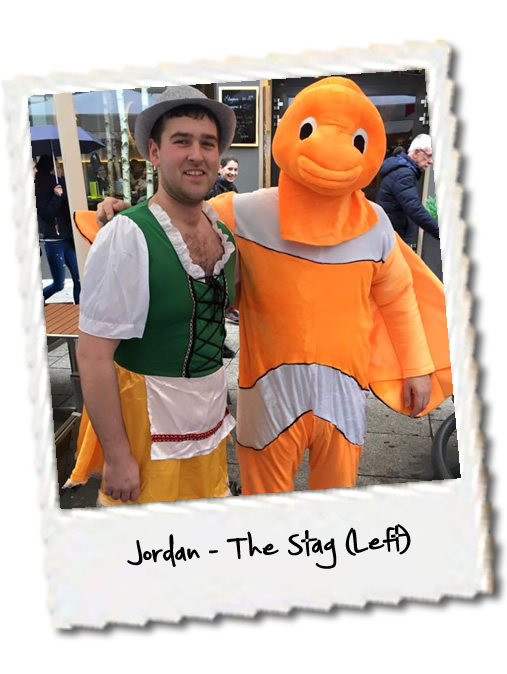 DALE IS BACK!!!! Maybe not back riding winners just yet but we were delighted to have Dale Irving return to the yard yesterday. He is back riding out here at Langholm and I’m sure it won’t be long until he is back in the winners’ enclosure too. From a personal point of view I know how hard it is to watch someone else do your job when you are out injured. Its heart breaking and I still struggle to watch a game of football without thinking that it could have been me. Dale is a tough young lad though and I know that he will come back stronger than ever… however I’m not quite sure how well he took finding out that he was down to do evening stables 4 nights in a row starting on his first day back!

This is a hard working yard from stable staff all the way up to James himself. Everyone gives 110% percent each day, every horse is treated as an individual and each has its own needs. Since starting my new job here at James Ewart Racing I have loved every minute of it, but what I have realised most is that this not a job… it’s a way of life.