With the rain, conditions have eased and we are able to have more runners.

At the end of November we said goodbye to Adam Brook who has now gone to work for Mark Johnston in Middleham. Alongside Neil, Adam worked very hard to improve the office organisation during the time he was with us and we wish him well in his new job.

We now have Gemma Anderson and Patricia Stirrup-Jones in the office.   Gemma held a dual purpose training licence and also ran a pre-training yard as well as riding on the Flat. As Racing Secretary, she will deal with the declarations, liaise with owners and travel the horses to the races. It turned out to be a flying start, as Bingo D’Olivate won at Ayr and used to be trained by her! Patricia will deal with the office administration and the accounts.

We had two runners at Musselburgh on Monday 26th November and won best turned out with both of them.   Civil Unrest under Steven Fox ran another cracking race to come second by seven lengths in the 2 mile Handicap Chase. The ground was dead with no spring in it and this may have been the reason for him jumping rather low but after the first he got into a good rhythm and was unlucky to be beaten by a well-handicapped southern horse.

Look Now who was best turned out ran in the Bumper and behaved very well in the preliminaries. Leading for much of the race, at times he was a little green but galloped all the way to the line to finish third and the first two look to be well above average. We will now go hurdling over two and half miles and the future should be exciting.

At Ayr on Thursday 29th November, we had five runners. The conditions had changed considerably from the previous day and the going was heavy. In Division 1 of the Maiden Hurdle run over 2 miles, Dunly ridden by Brian Hughes travelled well until the third last where he slipped on landing and did not really recover from that finishing seventh.   Brian felt that without the slip, he would have been in the frame and he has come out of his race well.   Ca Le Ferra ran in the same race with Steven Fox up and he was close up for most of the race until tiring in the ground conditions but overall a pleasing effort and his next run may be in a Novice Handicap Chase.

In Division 2 of the Maiden Hurdle conditions had deteriorated even further which did not really suit Into the Breach.   Ridden by Steven Fox he jumped well and kept on galloping and did not give up to come in fifth.   Given the ground, this was a good effort and in time he will appreciate a step up in trip.   Bluefortytwo was in the same race (Henry Brooke) and he was travelling well in fourth place when coming into the fourth last he veered to the right and after this he struggled to maintain his position and finished sixth. He will have come on for this run but we will give him enough time to recover from this race in case it was a muscle tweak which caused the problem.

Our last runner was Bingo D’Olivate - best turned out -in the 2.3 ½ mile Handicap Hurdle ridden by Brian Hughes.   He really relished the conditions and apart from the first and last, he jumped and travelled well throughout to win by two lengths.   He has come out of the race in fine form and we will find a suitable option in the near future and maybe bring him back in trip. He is another great addition to the Craig Farm Syndicate. 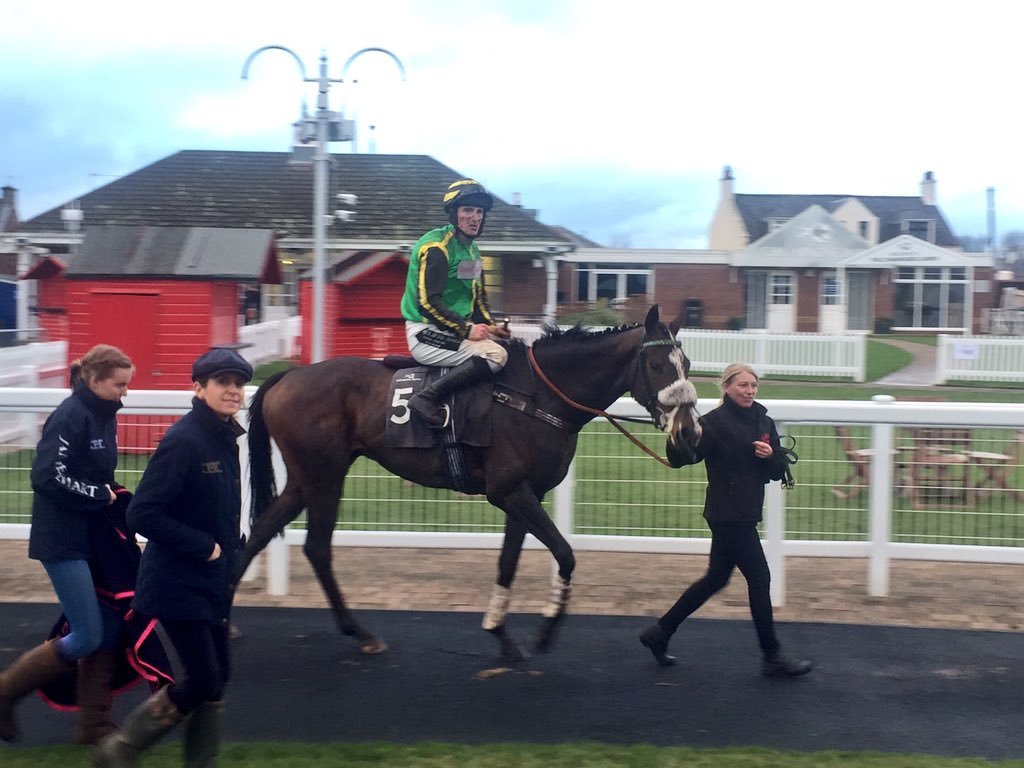 On to Musselburgh on Monday 3rd December where our only runner was Civil Unrest (bto again) in the 2.4 mile Handicap Chase.   He looked fantastic in the paddock, won best turned out and ran another superb race beaten by only two lengths.   Steven Fox had him jumping well until four out where he got very low and slightly lost his momentum.   However, he was giving a stone to the winner and five years to the horse in second place! So this was another very good run.

Under the floodlights at Newcastle on Wednesday 5th December, I am Dandy at last gained his just rewards in the 7 furlong race. Led up by Gemma (another bto), he was very resolute and in a tight finish won by a nose.   Ben Robinson rode an extremely professional race and we are very grateful to his guvnor Brian Ellison for letting him take the ride as undoubtedly his 3lb allowance made a difference. This was the first win on the All Weather for the yard!   Ben enjoyed a double on the card with Dandy Highwayman (by Dandy Man – the same sire as I am Dandy) and   Dandy enjoyed a victory roll afterwards at the racecourse stables and is the utmost professional now. 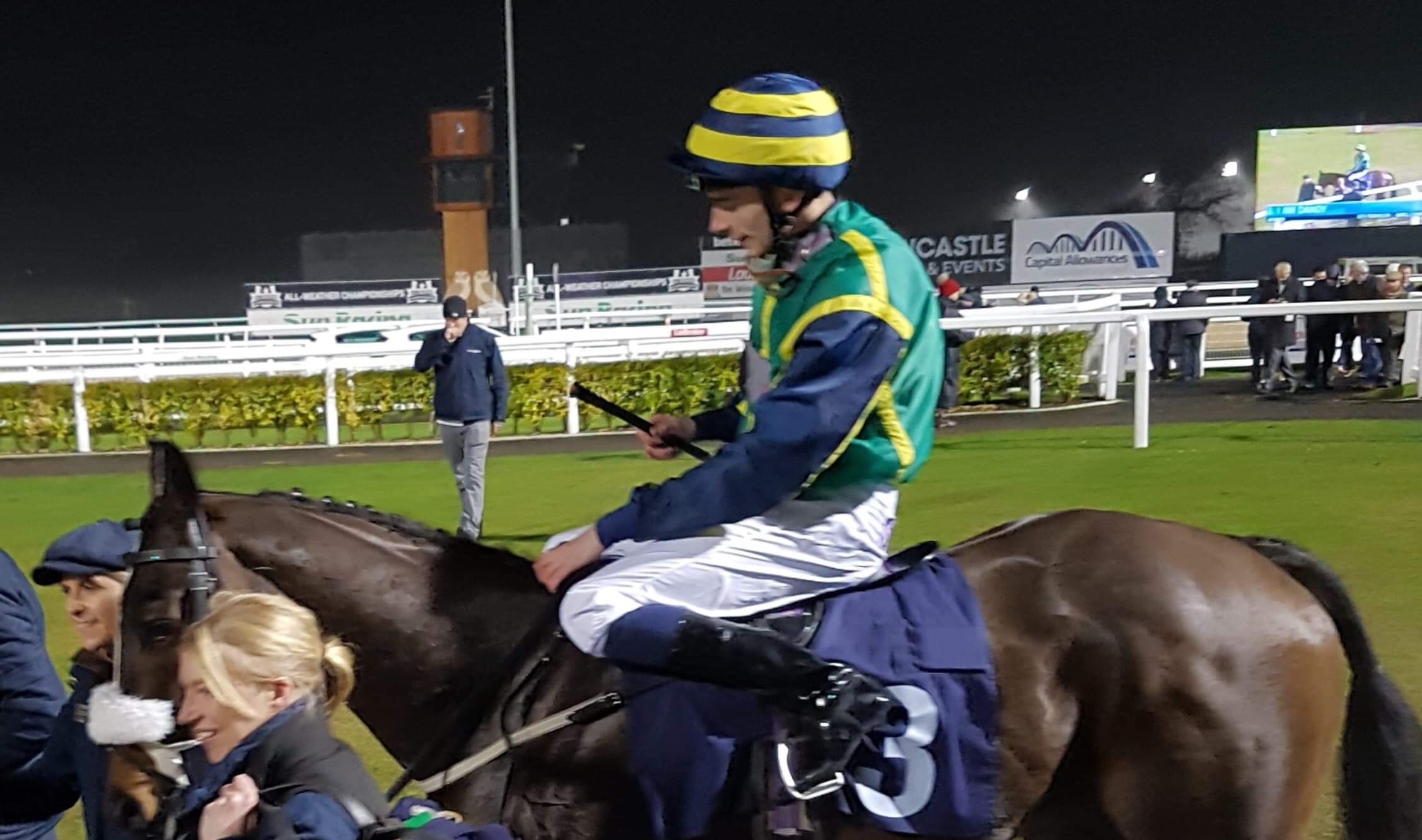 I am Dandy with Ben Robinson

We have future entries at Sedgefield, Wetherby, Kelso, Musselburgh and Uttoxeter.