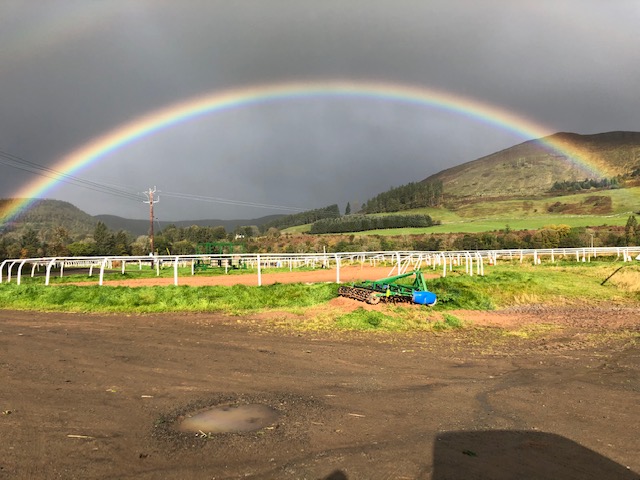 Going for Gold!   The Perfect Rainbow Over The Gallops Last Week

We have had only four runners at Sedgefield and Hexham since the last blog and these were all young horses learning their trade and every outing provides further experience for them to build on which all contributes to the finished article.

Many of you will have seen the high profile reporting of the contaminated horse feed from Gain Feeds resulting in Aidan O’Brien having to withdraw four runners from the Prix de L’Arc de Triomphe at Longchamp.   As we also use feed from this company we have carried out a number of tests which have all come back negative but we have switched to another of their products for the moment until the source of the contamination is confirmed and Gain Feeds can get back into normal production.

We were given a marvellous opportunity by Ayr to take six horses for a racecourse gallop on Friday after the last flat meeting of the year.   A big thank you to Graeme Anderson for allowing us such a valuable morning. 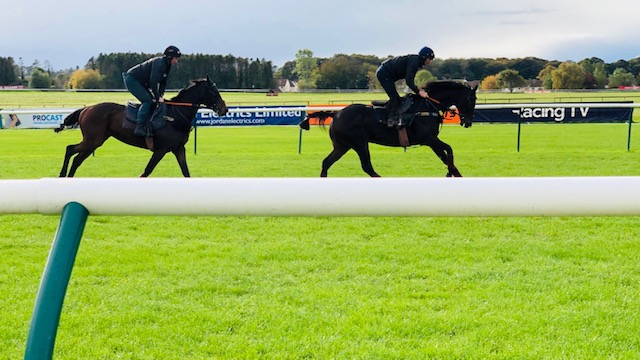 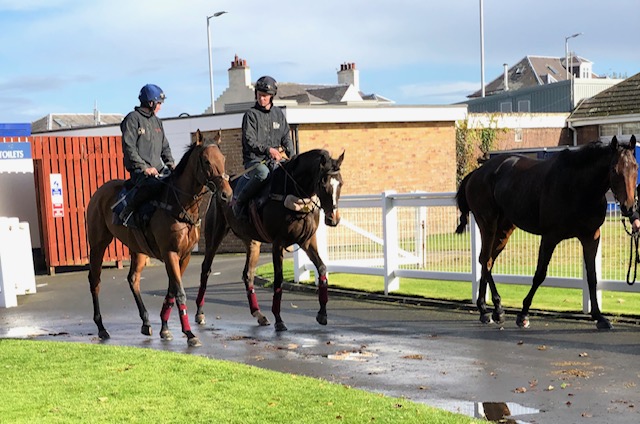 Graham Richards’ National Hunt Guide 2021 will be out shortly and this can be ordered on line at a cost of £10 per copy.   Several of our horses are included!

The weather at Sedgefield on Tuesday 29th September was warm and sunny but the going was much easier than at the previous meeting.   Rachael McDonald rode both our runners here.

The Blame Game had running a cracking race here at the previous meeting to win but he was not in the same form this time and really was not very happy at any stage in the 2m 4f Handicap Hurdle finishing 10th.   He does like really good ground but the easier going was not testing enough to have caused any inconvenience.   So we will just put a line through this and look for a suitable race before too long.

Honourary Gift  was our next runner  in the 2m Handicap Chase.  He got a little warm at the start and they set off at a furious gallop before he settled down and going round the top bend he was in second position.   He flew the next two fences gaining ground and then at the 8th fence he made a mistake and unseated Rachael who suffered concussion so she was taken directly to hospital for observation.  Luckily there were no broken bones and she was released the following day and we hope she will be back again soon after the mandatory rest period.   The horse also is unharmed and so most importantly both will be back again for another day.

At Hexham on Friday 2nd October Beat Box – who was awarded best turned out -ran a great race on his chasing debut  finishing 3rd in the 1m 7 ½ furlong Novice Handicap Chase.  He is only a four year old but with Brian Hughes on board his jumping was really good apart from one error.   This did knock him back a bit but he battled on gamely after that and was making up ground at the end and was only 8 ½ lengths off the winner.   The only other four year old in the race came last and Beat Box will possibly stay further on a flatter track.   We are looking at a 2m 4f Handicap Chase at Ayr for his next run.

Both Honourary Gift and Fostered Phil were bought at the November 2018 Cheltenham sales and both had run with great promise on their previous outings.   Fostered Phil could not quite repeat that sort of form again in the 2m Novices’ Hurdle.  He jumped well and Brian Hughes had him handy throughout the race but in the end he finished fifth beaten by 9 ½ lengths.  However, the rest of the field were way behind this leading group and the race may well have come a little too soon causing him to suffer the bounce effect.   It can happen that when a horse has had a long lay-off they run very well on their return but then do not repeat this on the next run.

We have had a very dry September and there are plenty of our horses who are still waiting for softer ground which cannot be far away.  Over the coming week we have entries at Hexham and Wetherby and Carlisle.

Once again we are living through very uncertain times with Covid 19 cases accelerating fast in certain areas but we must remain optimistic and hope that increased restrictions will help slow down the upsurge and then we can return to some sort of normality.   It is very encouraging  that racing still continues with plenty of meetings and good fields and we look forward to the time when more people will be allowed to attend.