A Great Start to the Season

In nine days we had six runners with two winners, two seconds and two fourths so this is a very encouraging start to the season.   It is also a great tribute to everyone at the yard as they all have their very important parts to play and they work so hard to produce the horses ready for racing.   Everyone has had a strange summer with little or no holiday and we are so grateful for their commitment.

We are also delighted to be supporting the 4Racing Owners Club who are running a fund-raising campaign called 4Racing v COVID19 to support stable staff after the effects of racing being shut down due to the COVID-19 pandemic.  To do this we are offering a complimentary Craig Farm Syndicate share and their prize money share percentage will be put towards the two charities detailed below.

4Racing Owners Club are contributing to two charities – Racing Welfare who provide vital help to those involved in all aspects of racing and Riders Minds who are dedicated to supporting the mental health and wellbeing of all riders.

We are very pleased that our farrier David Merry is kindly sponsoringor For Three  and Bingo D'Olivate by providing their shoes for the coming season and we are very grateful for this generous help.

As some of you may have noticed, we are updating the photographs on the website and have been very pleased with the results from Heidi Allison from Form and Function Photography.  As well as spending time with the horses and around the yard, she was also here when Brian Hughes came to school. Below are a few of her photos. 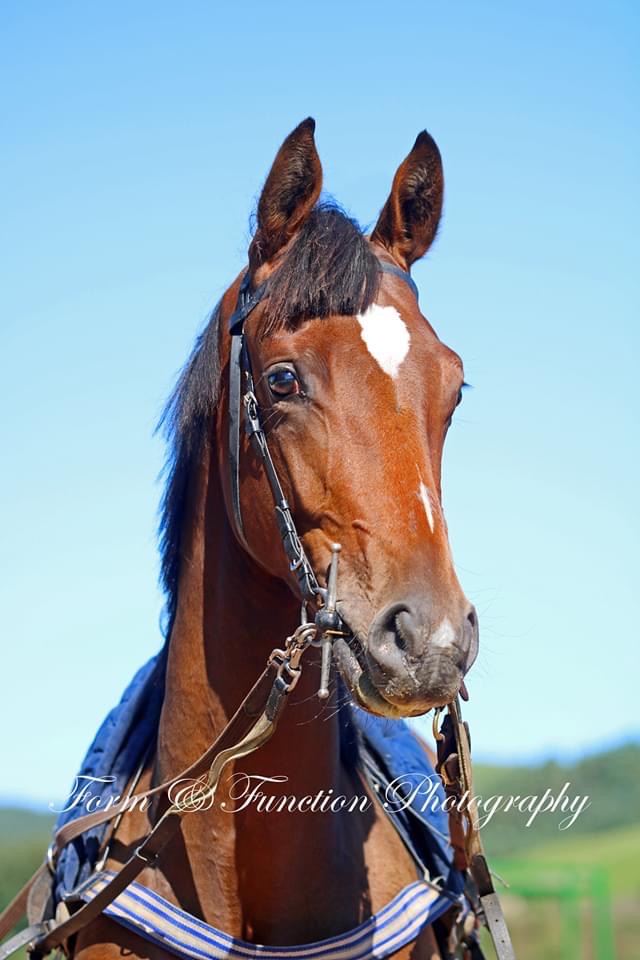 Donald - a yearling by Black Sam Bellamy out of Think Green 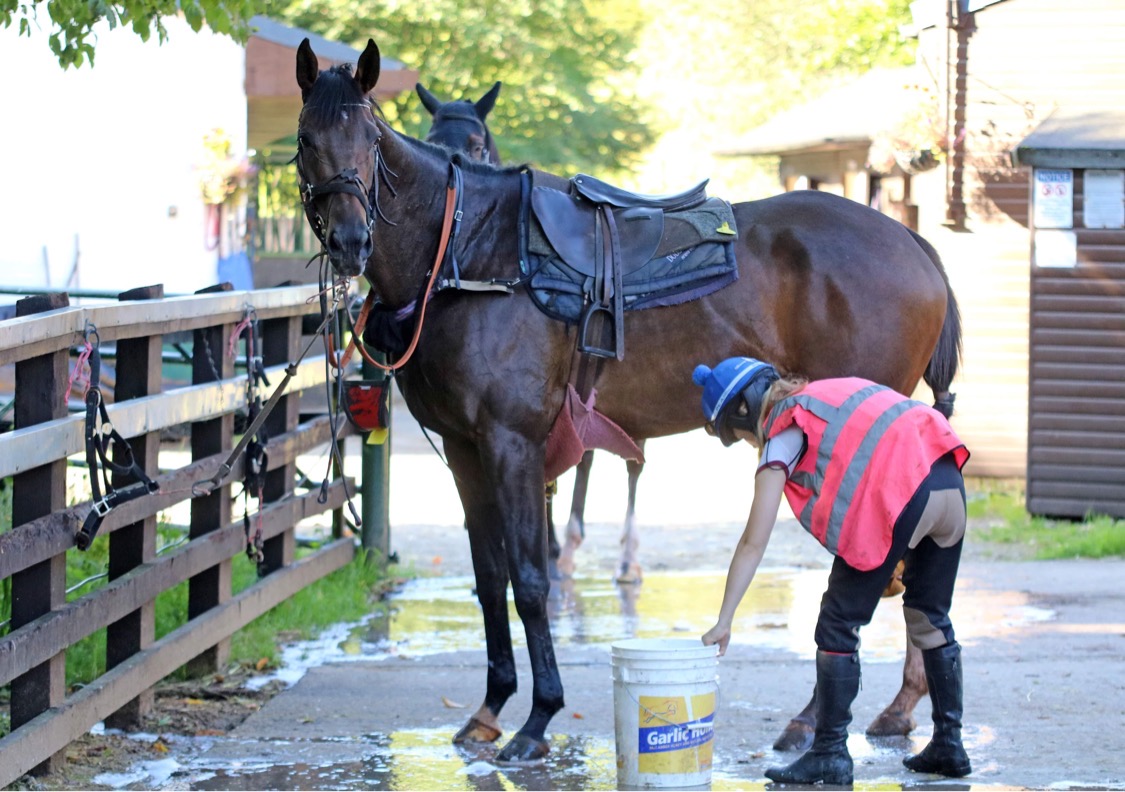 Washing down time.  Amy with Kervi 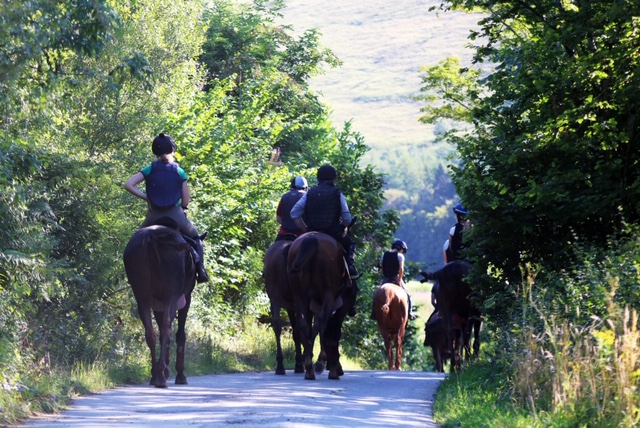 Quiet Roads and Tracks - Perfect for the Start of Getting Fit

During the summer Rachael McDonald joined the yard and has already had a winner with Empire de Maulde and a very good second with Honourary Gift on his fencing debut and after a long lay-off.   Rachael started with ponies as a child and then rode out for Stuart Coltherd at weekends before spending seven years with Lucinda Russell where she started off in point-to-pointing.   She then went on to Sandy Thompson where she took out her conditional licence in 2017.   She is currently working through her training with the Scottish Racing Academy and is doing her Level 4 and hopes one day to be part of the new academy helping young people along in racing.   We are very pleased to have her as a member of the team and her 5lb allowance is proving very useful!

It is always good to hear how our retired stable stars are getting on and Sleep in First is clearly much enjoying his retirement as you can see from the photograph below. 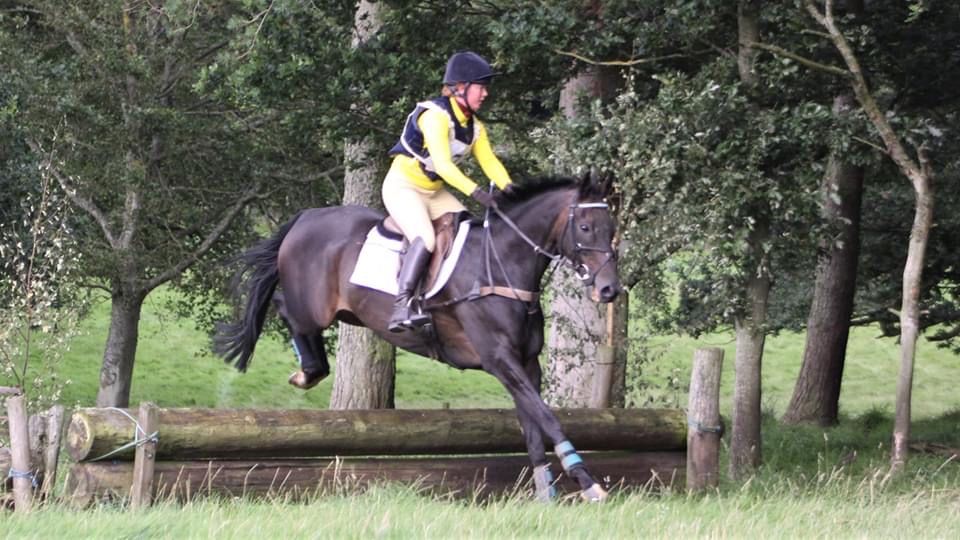 Sleep in First enjoying a Different Sort of Jumping!

First Runners of the Season

Our first runner of the season was The Blame Game (Brian Hughes) at Sedgefield in the 2 mile 4 furlong Novices’ Hurdle on Thursday 27th August.  The horse really enjoyed the fast ground and his jumping was excellent throughout in a fast run race.  He was easily able to lie up with the pace in third or fourth place throughout the race and was narrowly beaten into second place by a head so this was a great start to the season.

The weather at Hexham on Wednesday 2nd September gradually deteriorated throughout the evening with the rain really getting into the ground as racing progressed.

The first of our three runners was Nikgarde in the 2 mile Maiden Hurdle.  This was his first time over hurdles and Brian Hughes set off in a handy position on the inside and he mainly jumped very well apart from two out where he made a mistake which upset his rhythm and he finished fourth.   It looks as if he will be more effective over a further distance and once he has obtained his handicap mark we will then step him up in trip. He has come out of his race really well and is a thoroughly professional little horse.

Empire de Maulde with Rachael McDonald were next in the 2 mile 4 furlong handicap chase.   He coped well with the ground but would not want it any more testing as it was definitely becoming good to soft by this stage.   Rachael rode a very patient race and so in the latter stages he had plenty left and he picked off the leaders one by one to win by six lengths.   This was a very good performance and also it looks as if he will stay further on a flat track and so we were very pleased.   it was a great effort for his owners Steve and Jessica Murrills to come up to Hexham from Cheshire and so it was gratifying that they were well rewarded.   Also it was Rachael's birthday! 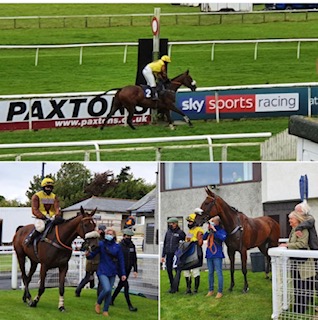 Unfortunately, the rain-soaked ground did not suit For Three in the 2 mile handicap hurdle.   Brian Hughes jumped him off handily on the inside but then he was very badly hampered on the first bend and was lucky not to have been brought down but he regained his rhythm and from then on jumped amazingly well.   Going down the hill he went to win his race but carrying top weight on this ground he ran out of steam and finished fourth.   However, this was a good effort considering the weight and the ground and he will come on from this.

We had two runners at Sedgefield on Friday 4th September where in contrast to Hexham, it was warm and sunny and the going fast.

A year ago Honourary Gift was seriously ill with Colitis and then suffered severe complications following his treatment.   So it was a great achievement for James and the yard to have brought him back fit after 504 days off to have his first run over fences in the 2 mile Novice Handicap Chase.   Rachael McDonald had him in a handy position from the start and his jumping was particularly good apart from a couple of slight errors most likely due to horses in front of him wandering about which is off putting for a novice.   He travelled well but was flat out for most of the way and the winner had more speed at the end and was also match fit having won his two previous races.   However, Honourary Gift kept on well to come second by six lengths and was seven lengths ahead of the third placed horse.   This was an encouraging start and we will look for a race on slightly easier going and over a stiffer track or further on a faster track.

It was only eight days since The Blame Game's last race but he had been bouncing at home and so he lined up for the 2 mile 3 furlong Novices' Hurdle with Brian Hughes on board.   Setting off on the inside they went off at a crawl for most of the race and perhaps as a result he didn't jump quite as well as in his last race.   Howeverr, he does really appreciate good ground and he moved into the lead approaching the last and was headed on the run in but then found plenty to win by 1 ¾  lengths going away.   He has plenty of speed and would probably appreciate a step up to three miles and so we have plenty to look forward to whilst we still have the quicker ground as this seems to be key to his performance.

The Blame Game with Brian Hughes winning at Sedgefield