A Great Day at Kelso!

We had a double at Kelso on Wednesday 16th September with Nikgarde and Lake Takapuna.  Rachael McDonald was on both horses and has now recorded seven wins at Kelso so this was a very good day for us to shine at our local track.   Racing Post referred to James Ewart Racing as an ‘In Form’ yard. 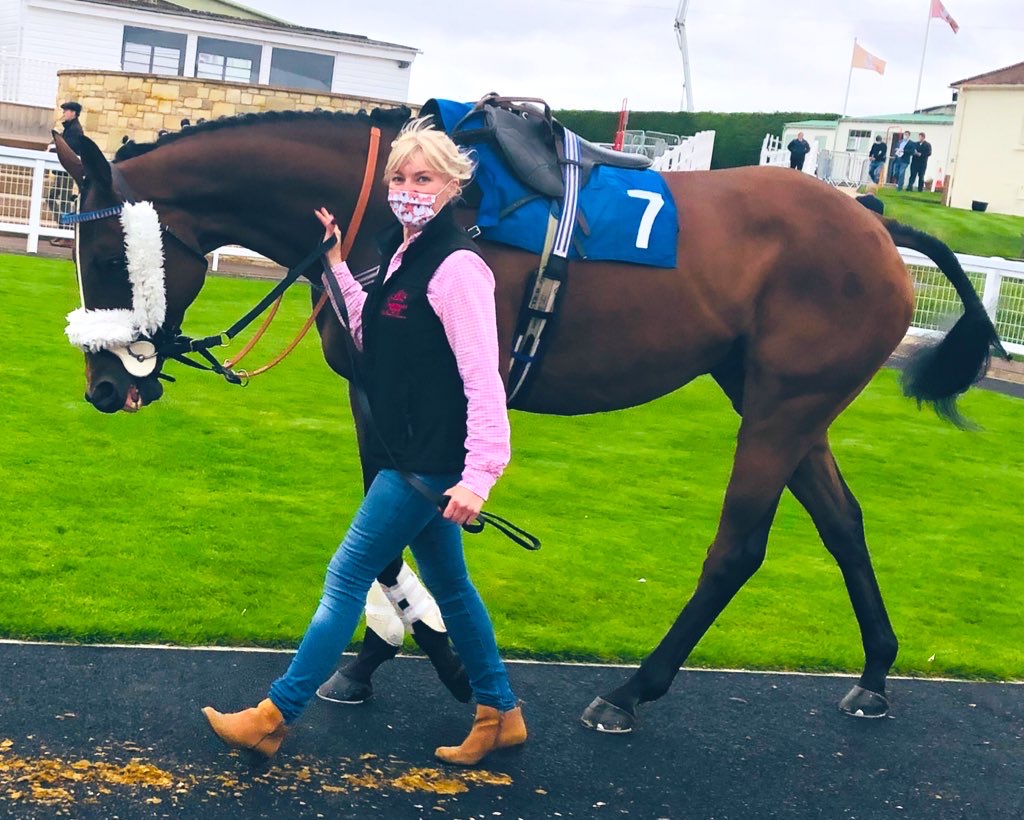 Lake Takapuna and Gemma in the paddock at Kelso 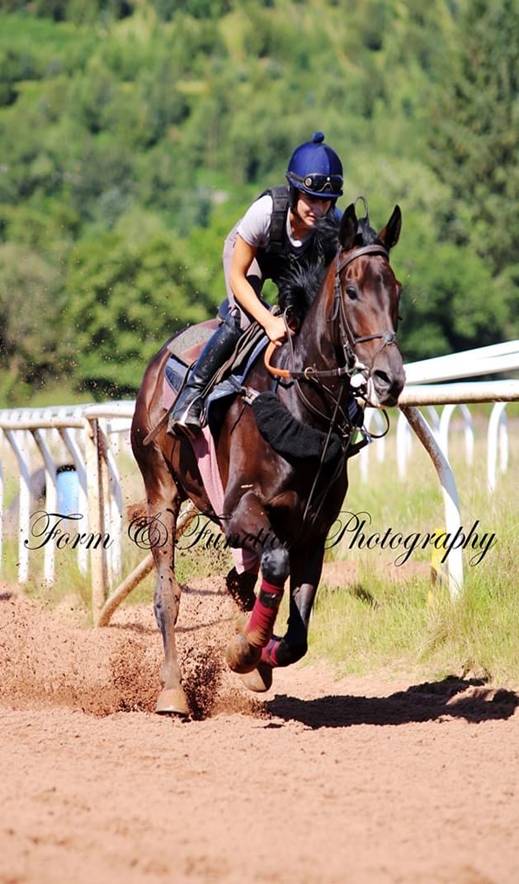 Also in the Scottish Farmer on Saturday 12th September, we had extensive coverage with a full page article by James on the state of racing in Scotland and also a quarter page advertisement for the Craig Farm Syndicate. 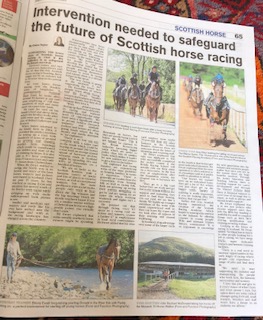 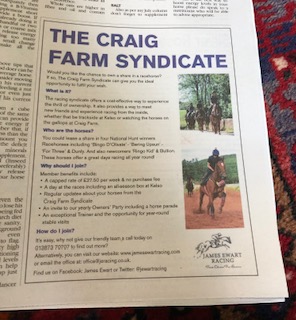 We are very pleased to welcome three  new owners to the yard - David and Margaret Hughes and George and Margaret Higgins who have both taken shares in Westland Row and James Daly who has taken a share in Lake Takapuna we wish them the best of luck with these two exciting horses.

We were back at Hexham on Tuesday 15th September and had a busy afternoon with five runners with Brian Hughes riding four of them and Rachael McDonald one.

The ground was good and these conditions were a little fast for Bering Upsun and Brian in Division 1 of the Handicap Hurdle where he finished seventh.   We were aware that the ground and course were not ideal but were anxious to get a run into him and on the plus side he jumped very well and appears none the worse for the experience.

Bullion seemed to manage the ground fine but did get a little warm in the paddock and down at the start.  We had asked Brian to be positive on him and he jumped really well and looked to be travelling strongly up the inside but he just couldn’t get up the hill second time round and finished sixth.  We will have to work out whether he needs a shorter trip or a flatter course next time.   He has suffered no stiffness after the race which sometimes has been a problem in the past.

Fostered Phil did not race last season but he had  previously shown promise in his Bumpers  and the form was strong.   Ridden by Rachael McDonald, the stiff 2 miles round Hexham in the Novice Hurdle seemed to suit him well and he ran a cracking race to come second beaten only two and a half lengths by a horse who had the benefit of previous recent runs.  After such a long lay-off this was a very good start to his hurdling career.

For Three with Brian Hughes ran in the 2m Handicap Hurdle and he had a few traffic problems racing on the inside and finished sixth.   There were 14 runners in the race and round Hexham that is quite crowded and also there was a delay before his race and he had to be re-saddled which he found unsettling.   Brian felt that he would be better off without the hood so we will maybe try that next time.

Cochisee was having his first racecourse appearance in the 2 mile Bumper.   Brian settled him beautifully in third or fourth for most of the way and then he ran on well at the end to finish second by four lengths to the Nicky Henderson trained winner.   This was a very encouraging start for this newcomer.

Next day at Kelso on Wednesday 16th September, the going was on the faster side of good which suited our three runners.

Nikgarde was ridden by Rachael McDonald in the 2m 5f Novice Hurdle and after his previous run at Hexham over 2m we felt the further distance would suit him better.   This definitely proved to be the case as he came home the winner by two lengths from the Nicky Richards trained horse.  He jumped really well apart from one slight error down the back and finished strongly which would suggest that he will stay further and so this was a very exciting result and a wonderful birthday present for his owner Jill Dodd who was cheering her horse home all the way to the line! 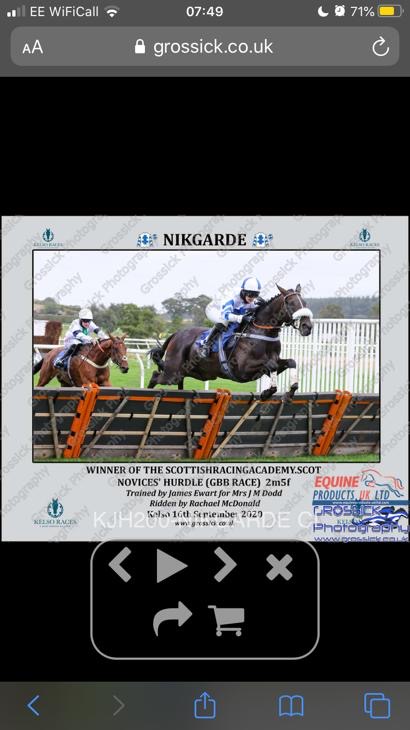 In the 2m 5f Handicap Hurdle, Westland Row was having his first run for the yard and he looked fantastic in the paddock and won BTO for Thomas McKay who was having his first day at the races.   Rachael McDonald rode him well up with the pace and he was keen in the early stages but his jumping was excellent throughout.  He was in with every chance until two out when the combination of running too freely and lack of a previous race maybe took its toll and he finished tenth.   In Ireland, they held him up and produced him with a late run to win his races and we now have to decide if we should do the same or ride him prominently over a slightly shorter distance.  However, he showed plenty of class and speed so we just need to find a race to suit him.

We completed a great day with Lake Takapuna’s win in 2m 1f Handicap Chase who also won BTO for Gemma.   Rachael McDonald rode a well-planned race and his jumping was excellent apart from one mistake.  He was badly squeezed after four out and did very well to recover from this and win easily going away by four and half lengths.  There are still shares available and he would be a fun horse to own! 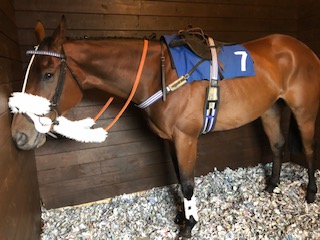 Lake Takapuna in the stables at Kelso

We have entries coming up at Sedgefield on Tuesday 29th September and there are further meetings at Hexham on Friday 2nd October and Kelso on Sunday 4th October.