After the enforced break due to the arctic weather conditions, we had a great day at Ayr on Thursday 22nd with a win for Beat Box and two good seconds for Thistle Ask and Lord Roco.  It was great to provide a win for Ed Austin who comes in each week to ride out and has a part-time job with Borders Flooring in Kelso. 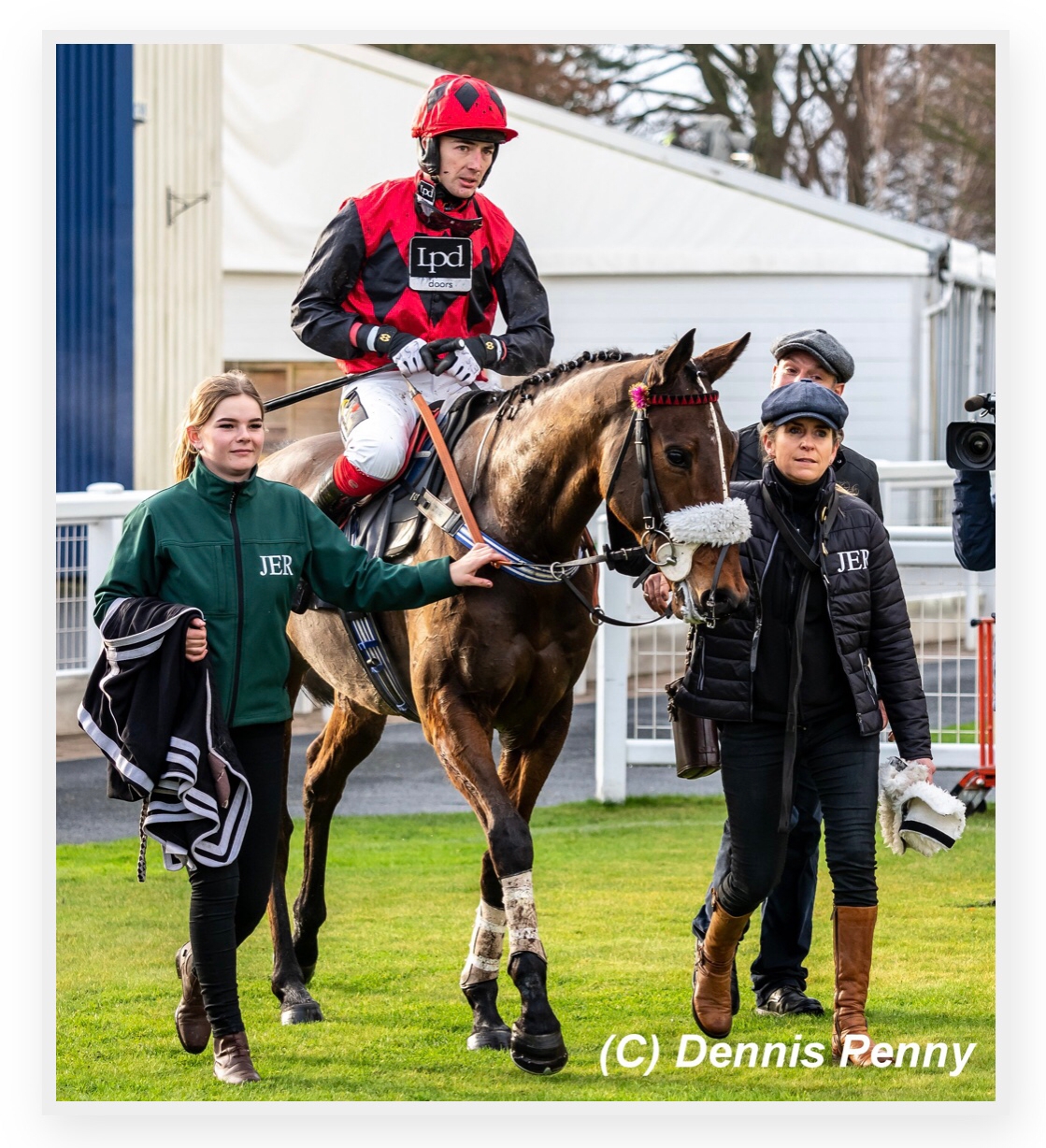 When the temperatures are sub-zero, the Tapeta gallop really comes into its own as Michael Dickinson always promised us.  However, this does not happen without a huge amount of effort with harrowing before and after every piece of work so this was a great team achievement to produce the Ayr runners in peak condition.

The staff outing this year was a Christmas lunch at Whitshiels on the outskirts of Langholm which was much enjoyed by everyone and put us in the festive mood!

We were very sad to lose two owners recently.   John Dodd who has been such a wonderful supporter of the yard and we had some memorable days with Aristo du Plessis.  John founded the plastics components company Millfield Enterprises in 1963 and he was a great lover of fishing and racing.   A devoted family man who was a great friend and advisor to us, he will be greatly missed and our thoughts are with Jill and the family.

Hugh Whitley had a passion for hunting on Dartmoor, racing and the family zoos.   He had a good horse with us Time Out and we had some great days.  He and his wife would set off at crack of dawn on race days and drive up north from Devon to watch him run

December Racing Round Up

Hapy La Vie (Robbie Dunne) won bto for Briony and ran well on the first circuit in the 2m 5f but then faded and so was pulled up.  He did not seem to stay this trip and so will drop back in distance next time.

Since joining the yard in the summer of 2021, Juge et Parti has never been out of the first four and never runs a bad race.   This was his first time over hurdles for us in the 3m Handicap Hurdle and ridden by the amateur Lyall Hodgins he was handy throughout and was just outpaced towards the end to finish fourth and only beaten by five lengths.   His strength now is probably over fences and he has an entry at Kelso in the Amateur Jockeys Handicap Chase on Thursday 29th December a race that Lyall won last year.   Lyall rides out for us each week and has a part-time job with horse dentistry company - Equidental International in Selkirk.

Juge Et Parti with Blake in the pre-parade at Wetherby

Danny McMenamin rode Hashtag Lord (another bto for Briony) on his third outing for us in the 2m Maiden Hurdle.  He was rather keen in the early stages and then became outpaced but stayed on well and will be helped now that he has a handicap mark.

Beat Box ridden by Edward Austin was returning to the scene of a former triumph in the Conditional Jockeys Handicap Hurdle over 2 miles as he won this race last year with Alan Doyle.  Held up towards the rear of the field he made headway towards the 5th and despite a slight mistake three out, he ran on strongly to win going away by 6 ½ lengths.  This was a timely wedding present for Helen Gordon who is getting married in Tulum (Mexico) this Christmas!  It was also good to get another winner for the new Fitzdares association.   James enjoyed a darts night at their club in London recently and we are looking forward to their sponsorship at Musselburgh this Hogmaneigh and at the New Years meetings. 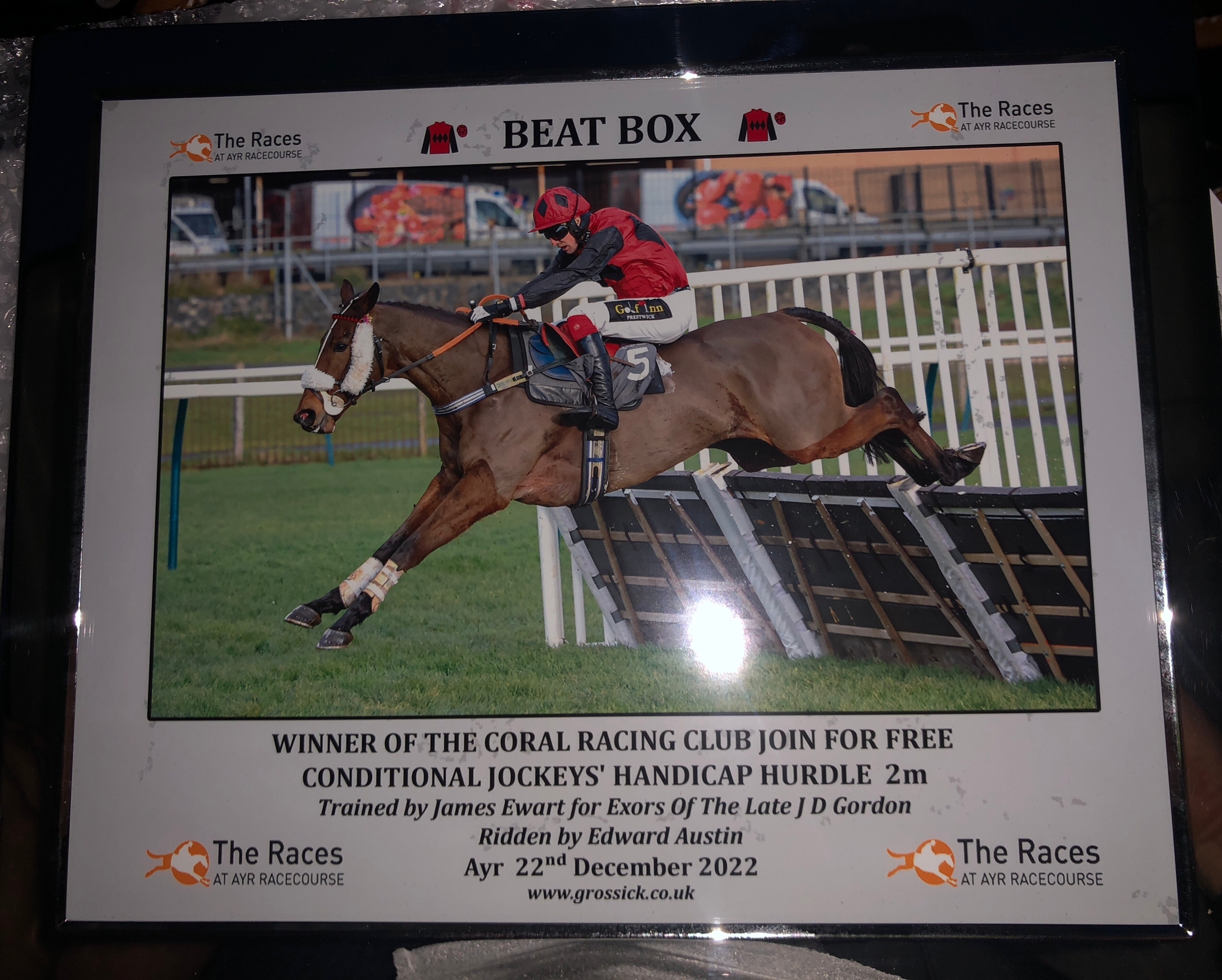 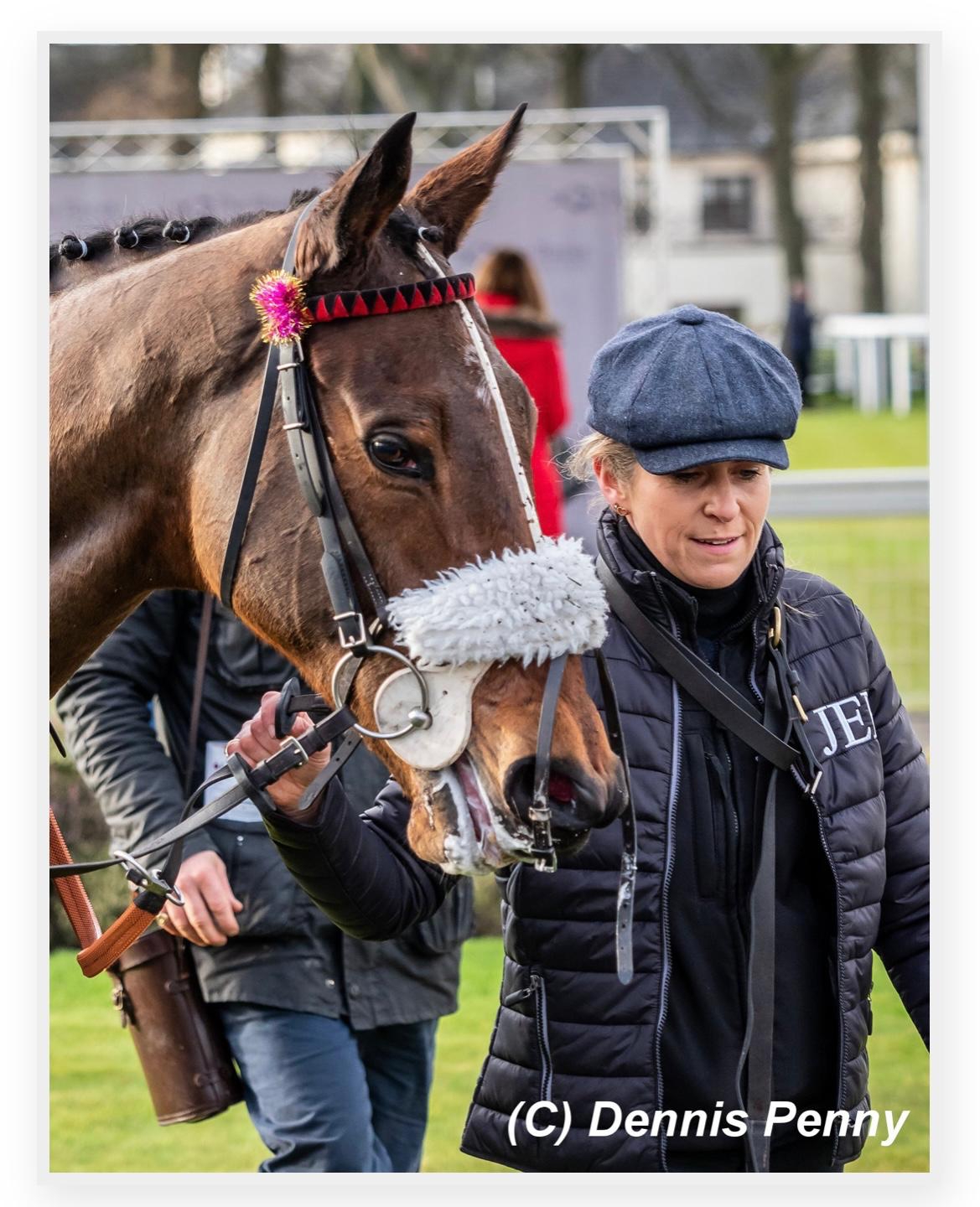 Thistle Ask who won bto for Chloe was having his second run for us in the 2m Maiden Hurdle with Danny McMenamin on board.  Thistle was much more professional this time in a notably fast-run race.   He took a keen hold and led throughout until he was challenged three out and could not catch the winning mare benefitting from the mares’ allowance and who had listed form.  He stayed on well to come second beaten 7 ½ lengths and showed great improvement from his first run.  So this was an encouraging performance. 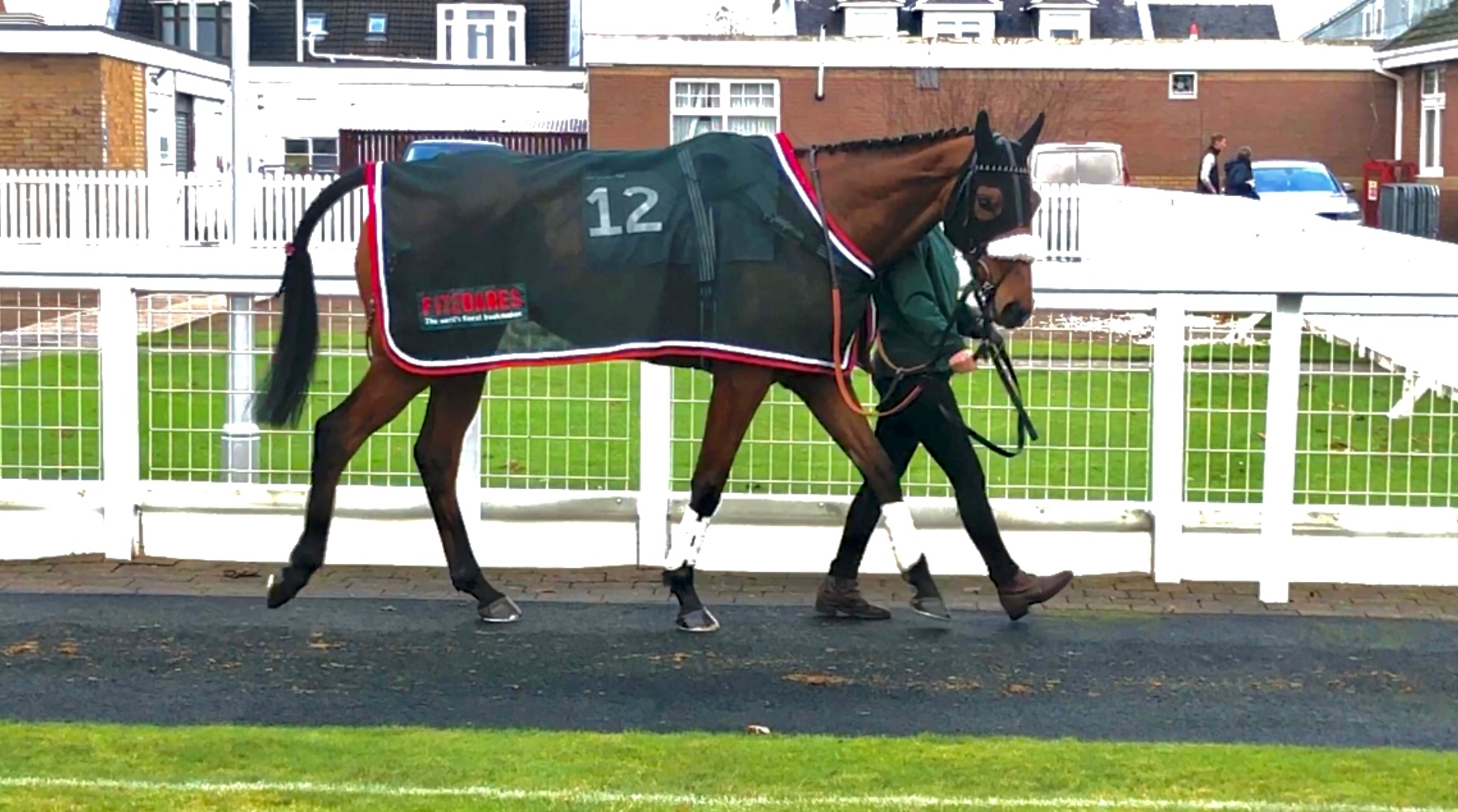 Thistle Ask in the paddock at Ayr 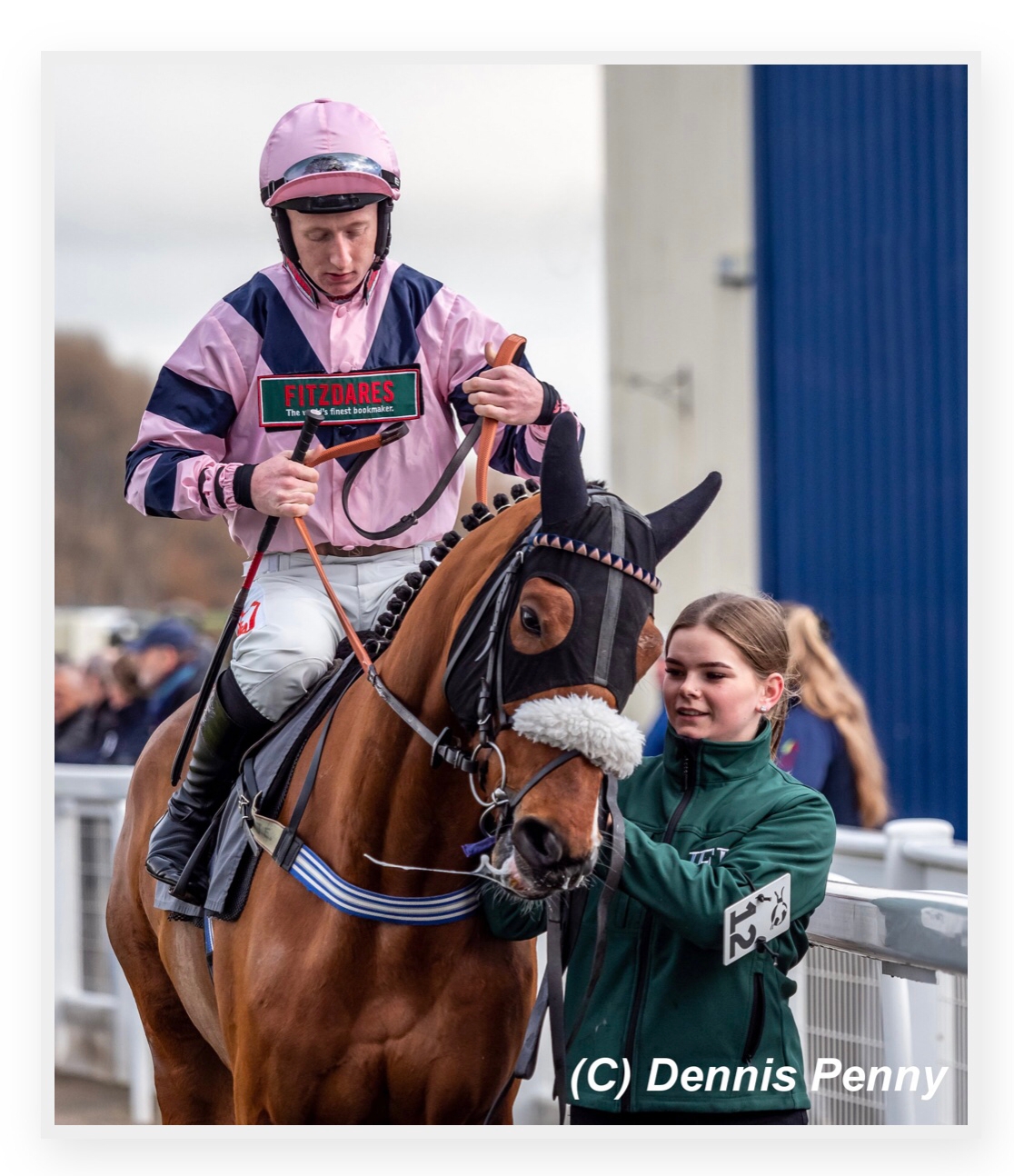 Lord Roco has done nothing wrong in his three chase starts this season and was again very unlucky to be beaten ½ length into second place by a prolific winning experienced handicapper carrying almost a stone less in the 3m Handicap Chase.  Danny McMenamin rode a patient race in mid-field and he was travelling really well but he slipped on take-off four out.  He then rallied strongly and was only just denied on the line to record his third second place.   Fingers crossed for a win next time! 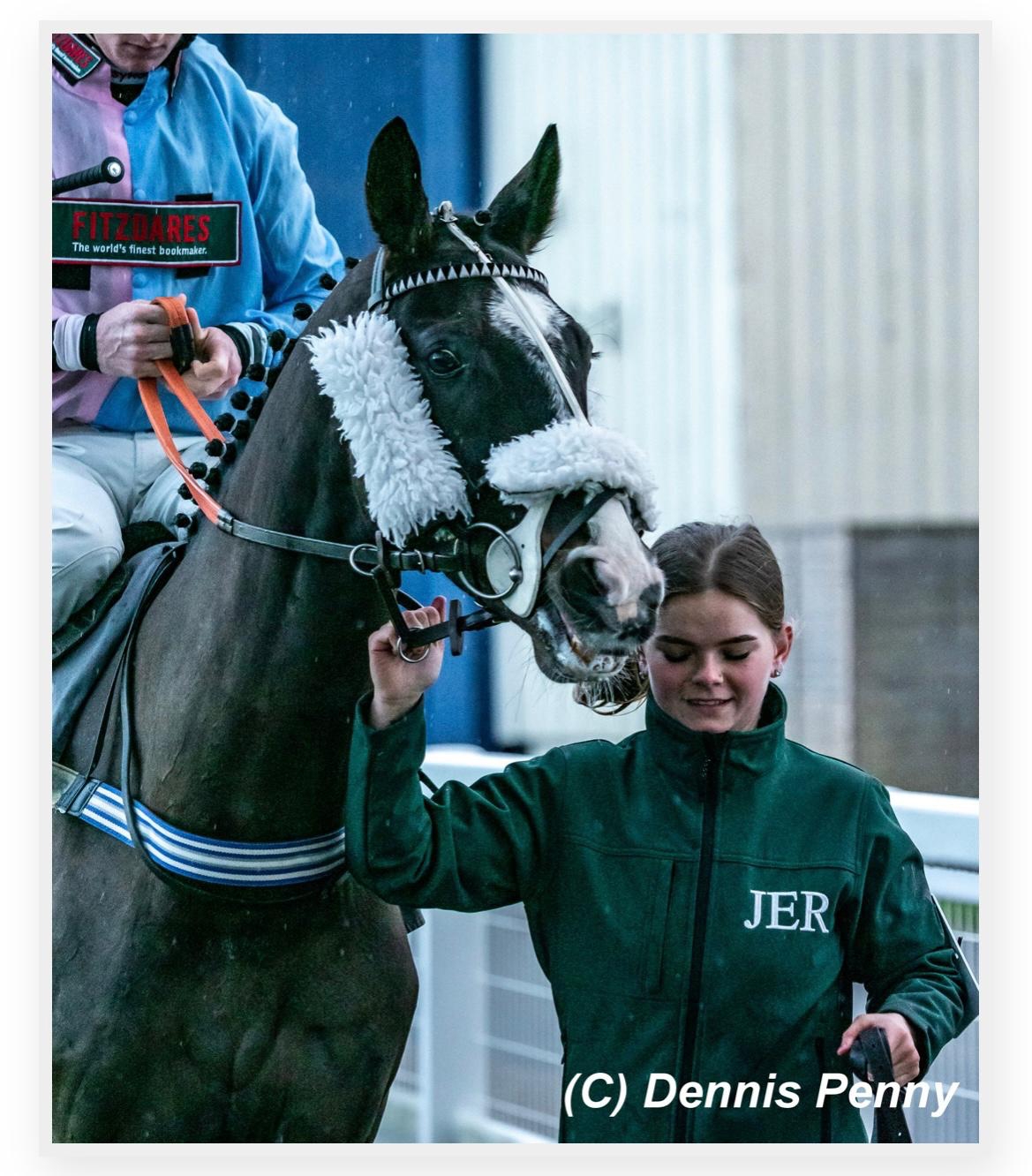 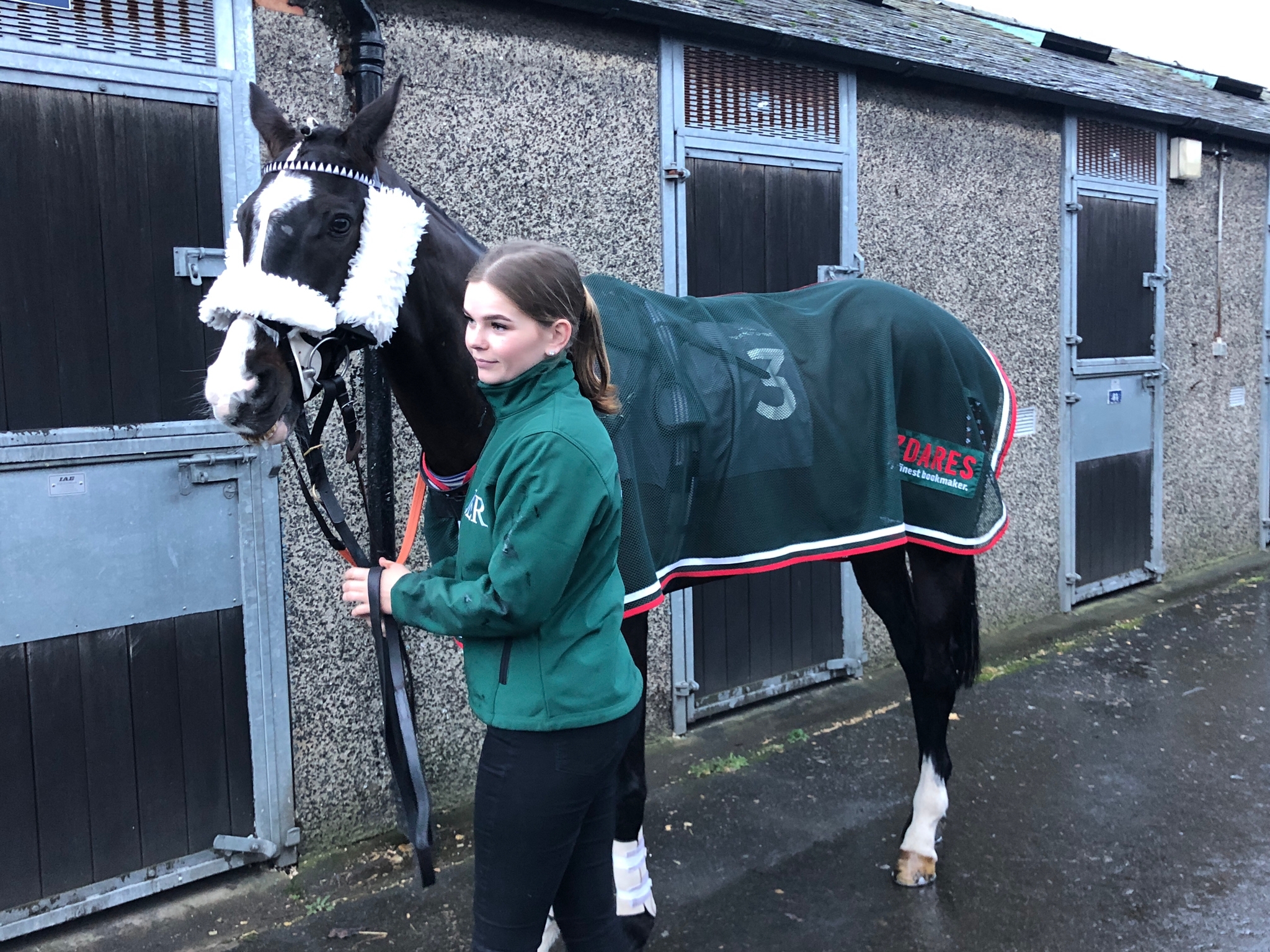 We have entries coming up at Newcastle, Kelso, Doncaster and Haydock and wish you all a very Happy Christmas and a successful New Year.