We had an exciting start to the New Year on the 2nd January when James saddled the first two home in the 2 ½ mile Novice Hurdle at Ayr.   Briony recently purchased the winner Escapeandevade from well-known bloodstock agent Tom Malone.  This has turned out to be a shrewd move as just before joining the yard he won a 3 mile Maiden Point-to-Point at Wadebridge in Cornwall by 10 lengths and then followed this up by winning his first race under rules for the yard.   Lord Roco also ran a great race under a brilliant ride from Alan to stay on well and just capture second place on the line.   Alan Doyle also had a double last week at Ayr winning on Cellar Vie and Green Vault for Lucinda Russell.   There could not have been a greater contrast between these two rides and this emphasised Alan’s riding skills and earned him a mention in Racing Post. 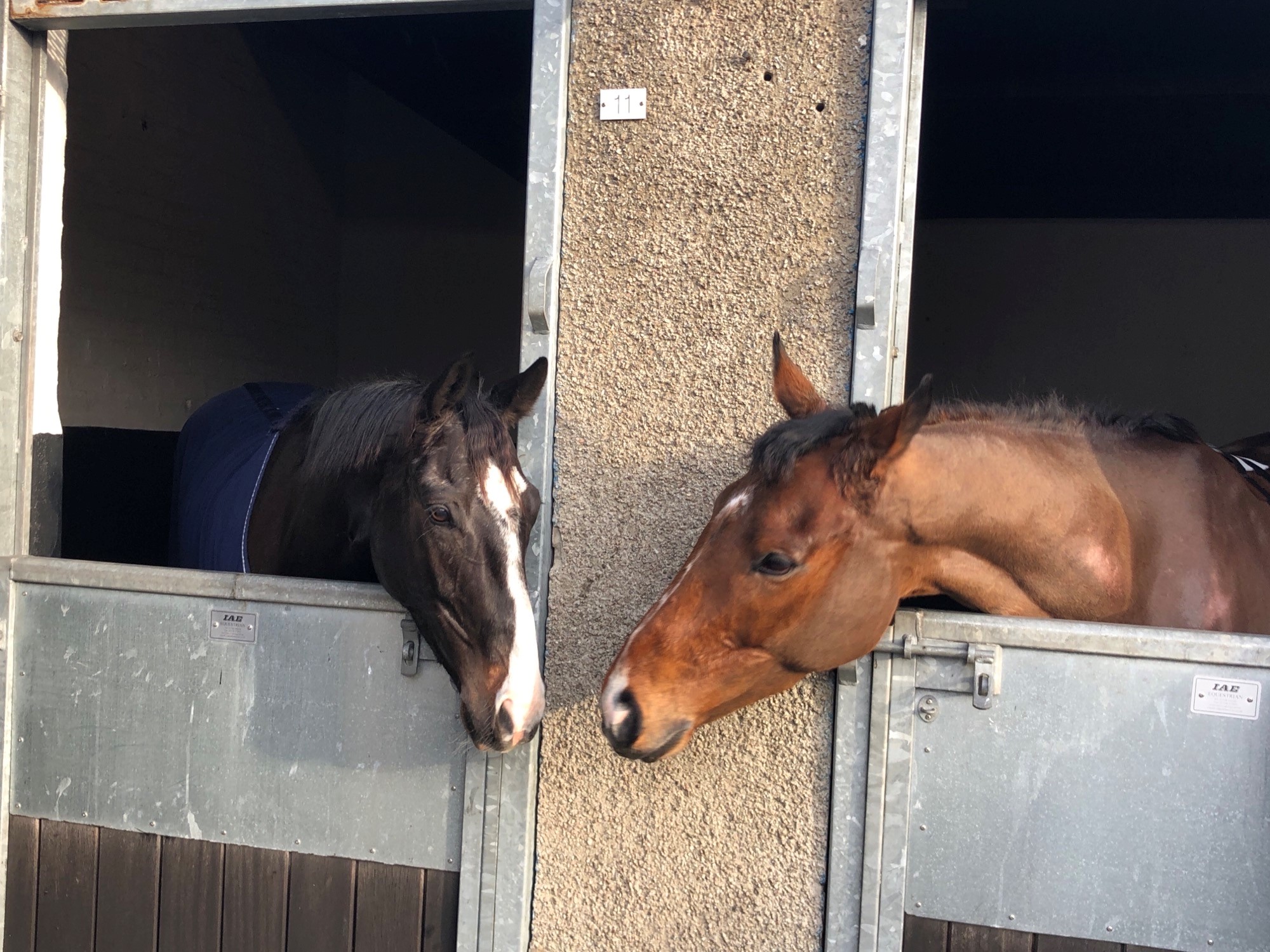 We were very sad to hear of the death of Margaret Graham on Thursday 13th January.   Wilson and Margaret were one of the earliest supporters of the yard and her infectious enthusiasm through good and bad times was uplifting.   She was an exceptional person who will be much missed and our thoughts are with her family.

The result for the 2 ½ mile Novice Hurdle was a turn up for the books with Escapeandevade going off at 28/1 and Lord Roco at 80/1!

Escapeandevade ridden by Callum Bewley set off in the lead and there he stayed throughout the race.   Callum had him a lovely jumping rhythm and he quickened impressively after the last hurdle to win easily by 4 ½ lengths.

Alan Doyle settled Lord Roco towards the rear of the field and his jumping was very neat and accurate.  He gradually moved up through the field and was slightly outpaced two out but then stayed on strongly to take second place on the line beaten 4 ½ lengths by his stable companion.  This was a very good performance under an excellent ride from Alan. 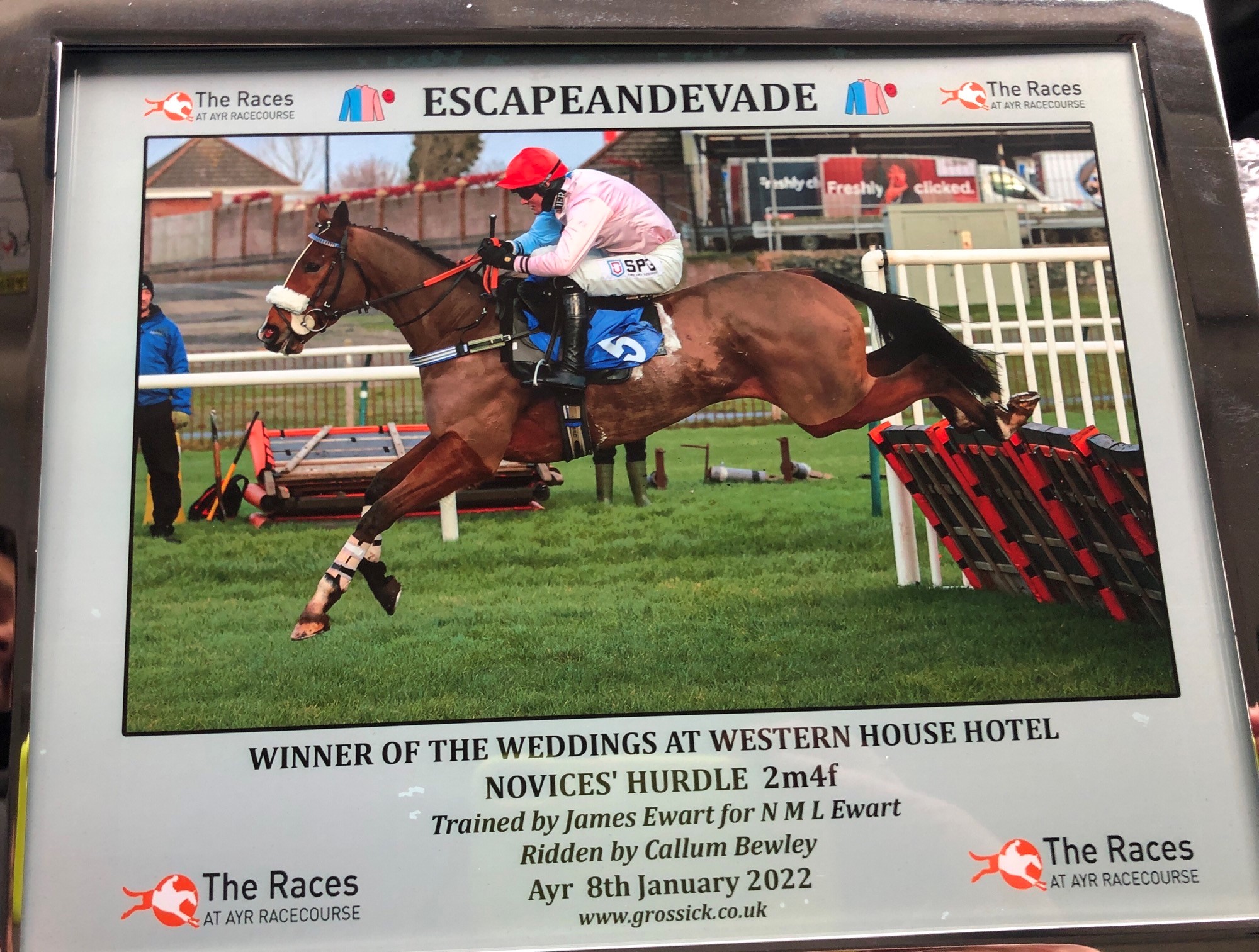 Both Benack and Hold Onto The Line ran in the 2 ½ mile Novices’ Hurdle.

Benack won BTO for Briony and behaved very well in the preliminaries.  Jamie Hamilton was riding and settled him nicely on the inside.   The winner set sail after the fourth hurdle and opened up a substantial lead stretching out the rest of the field.  He jumped well throughout and stayed on resolutely to gain fourth place.  This was a pleasing run and we might consider 3 miles next time if a good opportunity arose.

Hold Onto The Line with Alan Doyle did not get the best of starts and had no sight of the first hurdle which did not help and after that he was always struggling on the soft going.  He needs a sounder surface but he was fresh and well the next morning and is none the worse for this outing.

Brian Hughes rode Ettila de Sivola in the 2m ½ furlong Handicap Chase but for whatever reason he just did not pick up.  The ground was very heavy which did not help horses carrying heavier weights but we are going to change a few things at home in his training programme and may look at running him in a hurdle.

Cellar Vie won BTO for Briony and Alan Doyle took him down early to post for the 2 mile Novices’ Handicap Hurdle.  Alan stole an early lead which paid dividends later on and he kept this position throughout and rallied well when tackled by the joint favourite to win by a length and provide Alan with a double on the day.   This was a great ride by Alan as the horse consistently jumped to the right and was not the easiest but he kept on gamely at the end to register his first win and keep up the stable’s good form.

He has come out of his race very well. There is still a 10% share available and the horse will be seen to better effect on a right-handed course and so will probably go to Carlisle next time. 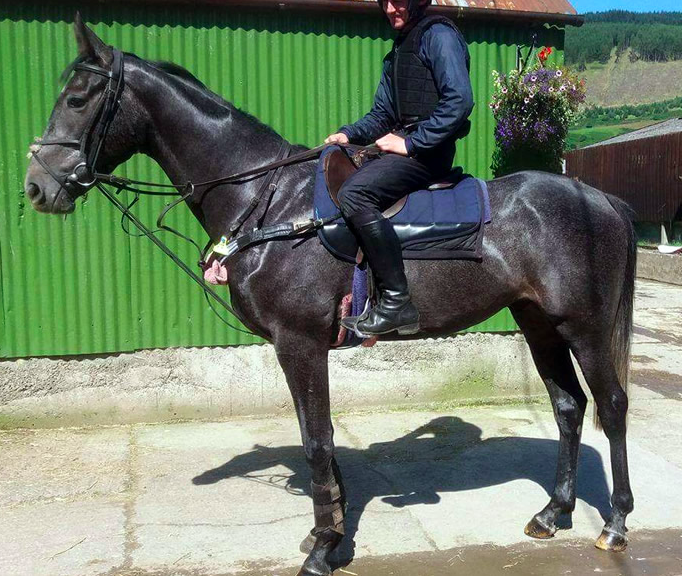 Now a winner!   Cellar Vie as a young horse

It is encouraging that Covid restrictions are being eased for outdoor gatherings and we have entries coming up at Wetherby and Kelso.