The Great Escape! A Flying Start to the New Year

Fitzdares generously sponsored two days racing at Musselburgh on New Year’s Day and again on Tuesday 3rd January.  So, it was particularly appropriate that Community Rebel won the 3 mile Maiden Hurdle on the 3rd January for the yard’s sponsors – Ftizdares! 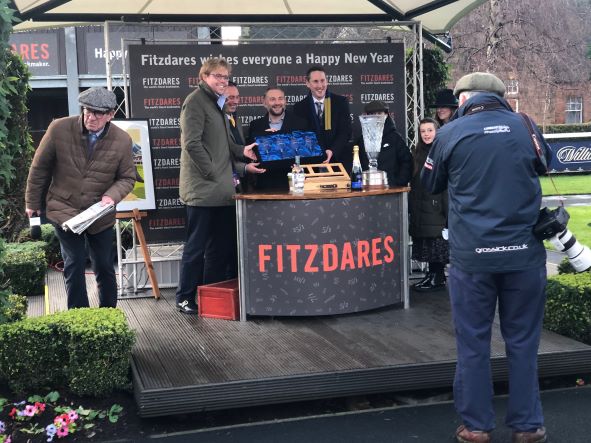 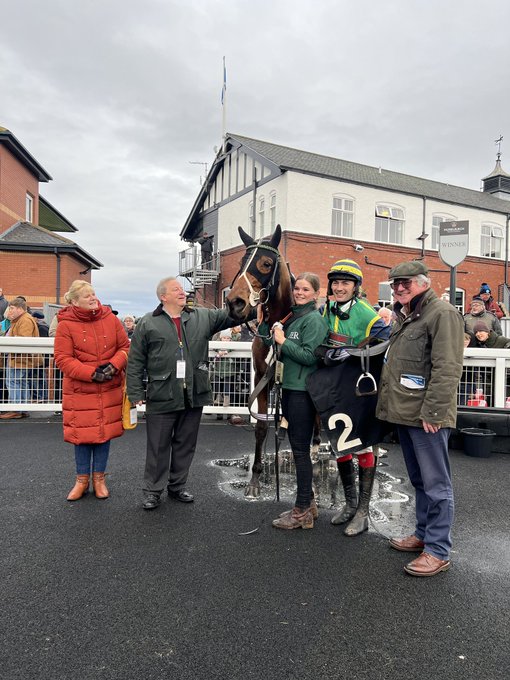 This followed an eye-catching win for Escapeandevade on the previous day at Ayr on his second start over fences in very testing conditions. 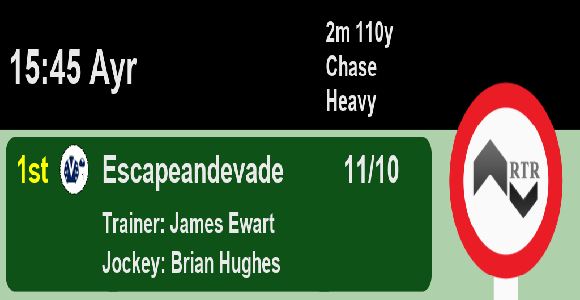 So, this was a great start to 2023 with plenty still to come.

We are delighted to welcome a new owner Raymond Cooper to the yard with his horse ‘Don’t Tell Allen’ and there will be a web page for him shortly.

Heroique de Maulde with Brian Hughes produced another good run in the 2 ½ mile Handicap Chase and was only beaten by 3 ½ lengths into third place.   He handled the ground well but will now have a wind op on Brian’s suggestion. 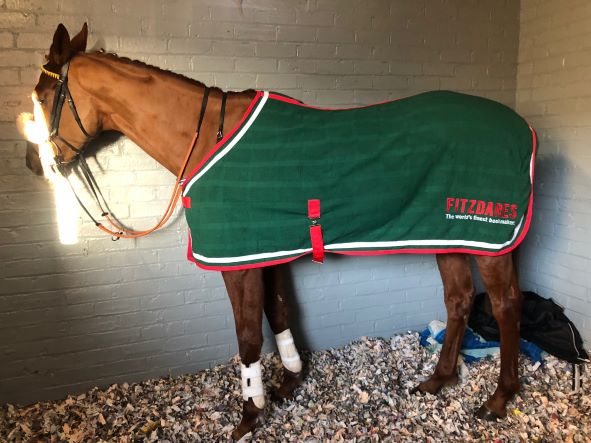 Both Juge Et Parti and Brayhill were pulled up in their races on very testing ground so this was a disappointing day at Kelso.   Juge was in great fettle at home and no obvious issues have been found.

Brayhill was not right and has had bloods taken as well as trac wash and scope to determine the course of action. 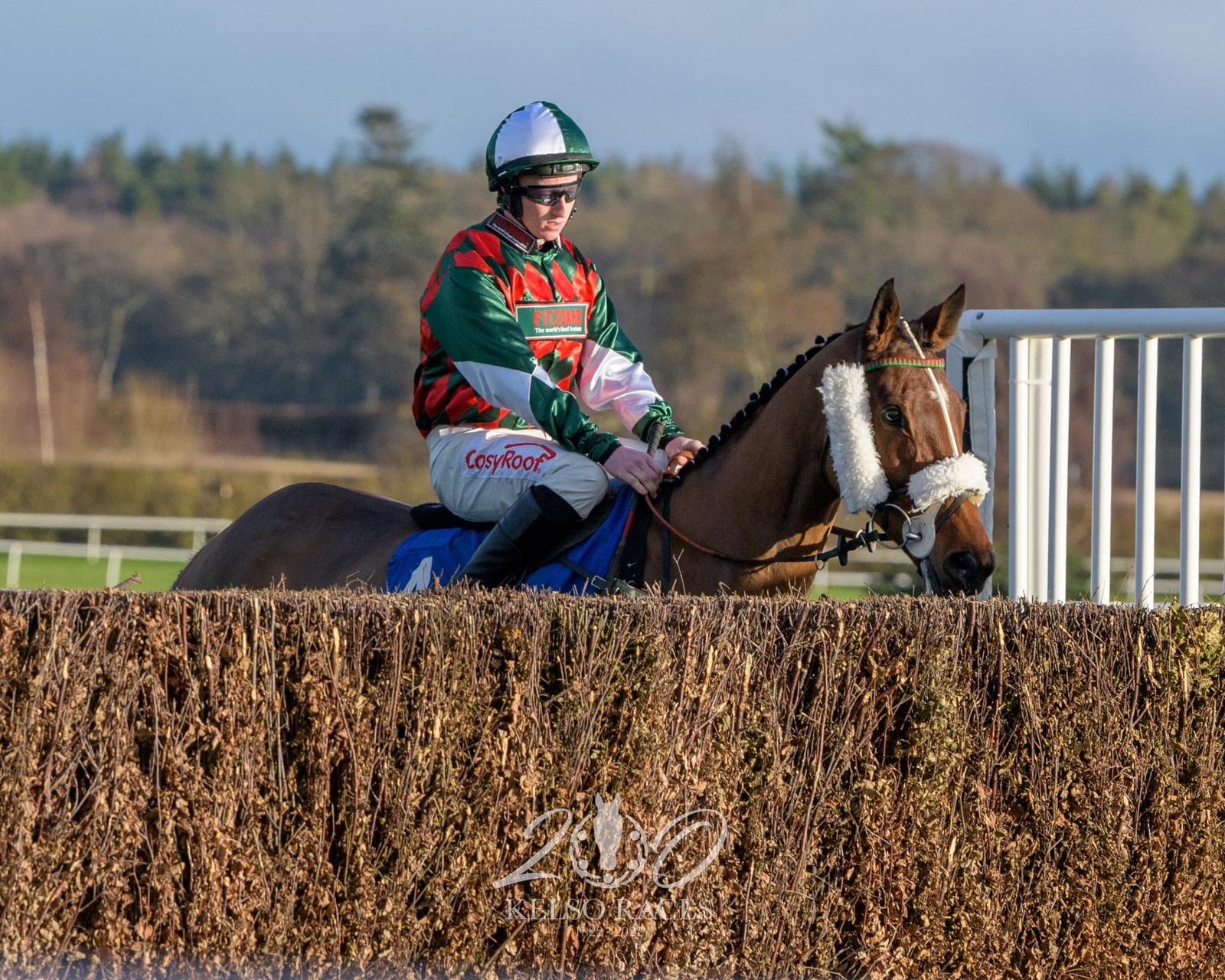 Brayhill with Danny McMenamin at Kelso

Conor Rabbitt  had a very difficult journey down to Doncaster as there was a three hour delay due to a crash and he only reached the course 45 minutes before the race which was not ideal...However, Fostered Phil ran well to come third in the 2 mile Conditional Jockeys’ Handicap Hurdle.  This was a smart race and he was slightly outpaced three out but then stayed on strongly towards the end.

Ed Austin was on board Jim’s Apple in the competitive 2 mile Bumper and she ran another solid race to finish fifth and will be seen to better effect once she goes hurdling. 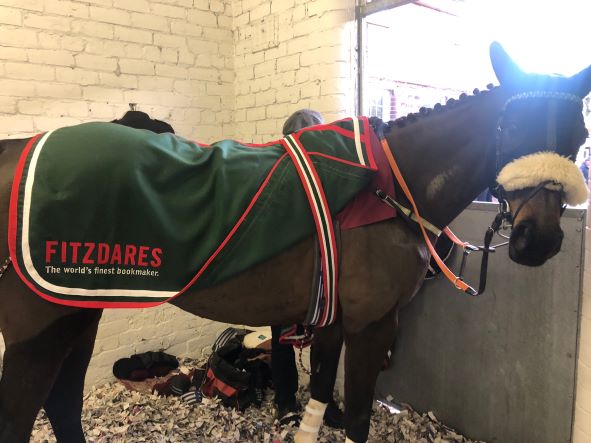 Hapy La Vie (Ed Austin) jumped well in the 2 mile Maiden Hurdle but he is not finishing his races.  He scoped at the course clean and needs a handicap mark as soon as possible.

Brian Hughes understands Escapeandevade very well and they led from start to finish in the 2 mile Handicap Chase.  On only his second run over fences and with ears pricked, Escape relished the conditions and at the fourth last put in a spectacular leap before going away to win by 15 lengths.  This was an exciting performance carrying top weight in such heavy going. Racing Post commented ‘He has a likeable profile….so should hold his own in a better grade ’.  So we hope this is the case and are planning to keep him at 2 miles for the moment but in time he will stay further. 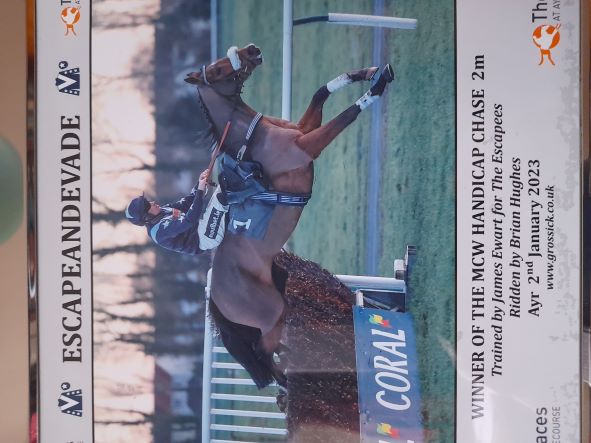 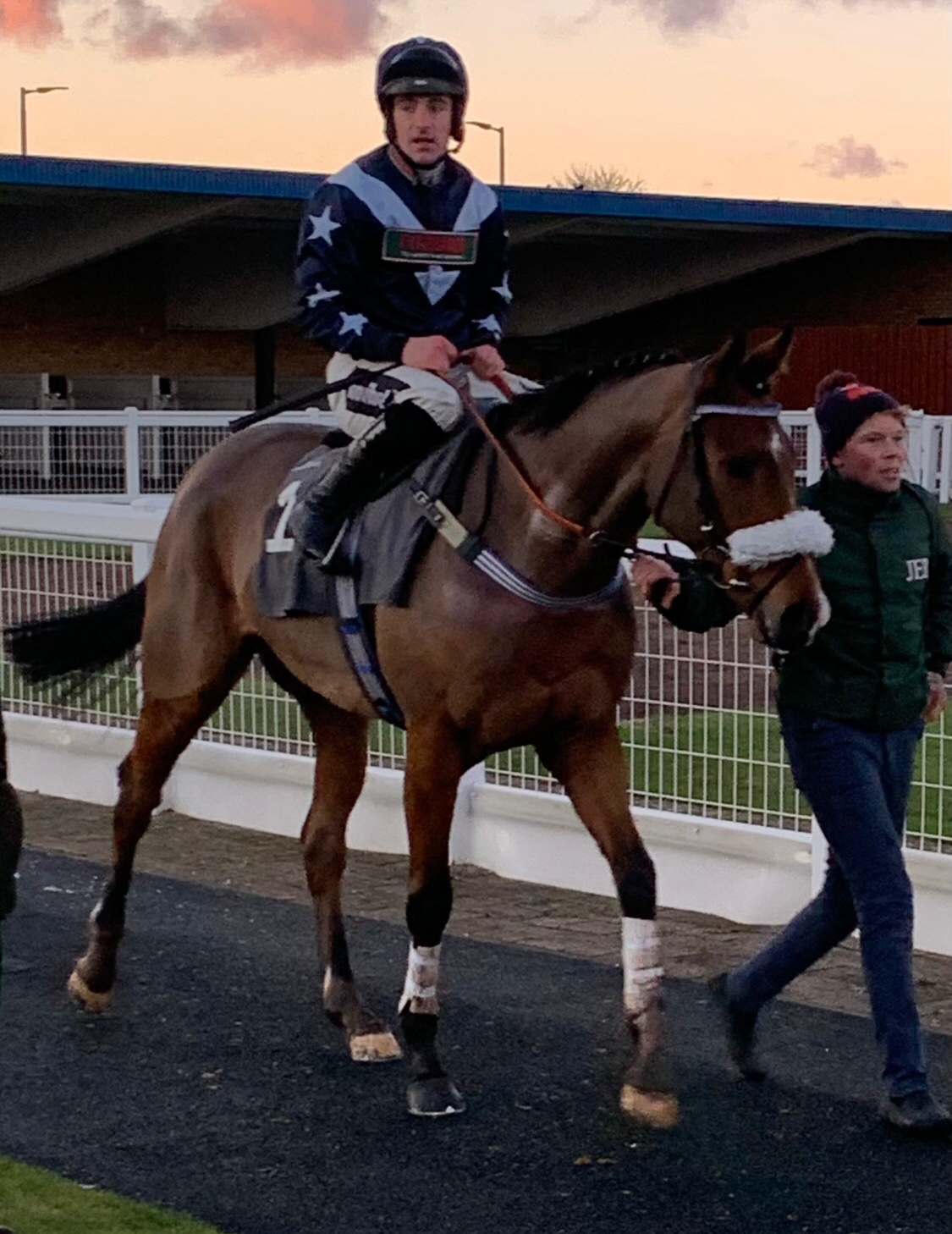 Ed Austin rode Community Rebel in the 3 mile Handicap Hurdle.  Wearing a hood, he was still very keen in the early stages but was given a great ride by Ed and produced to perfection to win by a neck.  This was particularly satisfying as Fitzdares sponsored the race and provided an exciting finish for the Craig Farm Syndicate.  There are shares available! 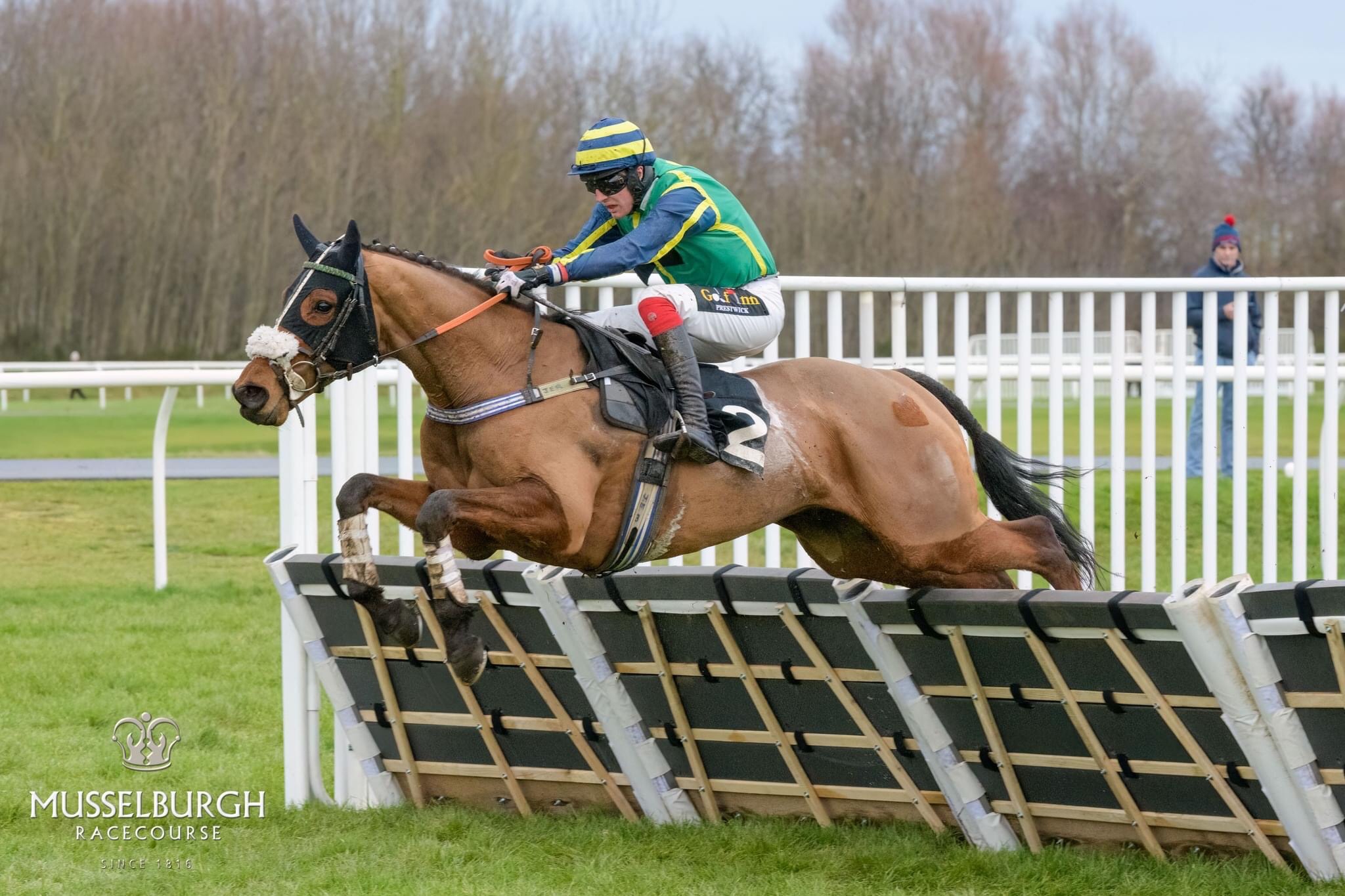 Lake Takapuna (Danny McMenamin) ran in the 2 mile Handicap Chase and jumped really well but towards the end could not quite keep up and finished an honourable fourth. 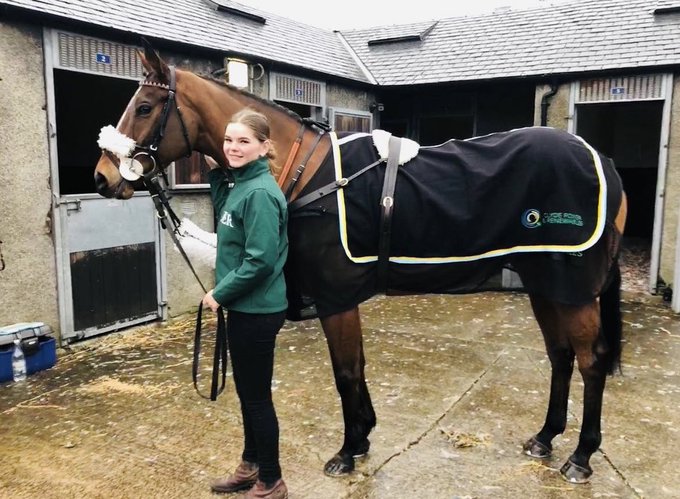 Lake Takapuna with Danny McMenamin at Mussleburgh.  Bto for Chloe

Next week we have entries coming up at Ayr and Doncaster.