We have been lucky to avoid the extreme flooded conditions suffered across the Midlands and north of England with Cheltenham losing the first day of their November meeting . The Bet Victor Gold Cup was saved with racing resuming on Saturday but the fields for most of the races were much reduced. Some of our horses have not relished the conditions further north either but Charmant ran really well at Aintree and we still have some exciting horses yet to run. 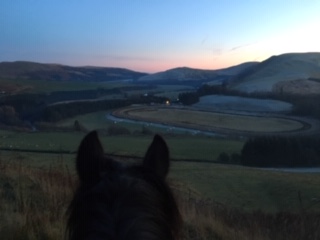 The Blame Game had his first run over hurdles at Musselburgh on Wednesday 6th and was ridden by Brian Hughes in the Congratulations Gerry – Back to Back – Champion Novices’ Hurdle over 1 mile 7 ½ furlongs.   Unfortunately, his jumping was rather slow over the hurdles causing him to lose ground each time. However, he travelled well throughout the race until the second last where he lost quite a lot of ground and kept on at the same pace to finish fifth.   He definitely requires good ground and probably needs to step up in trip on a flat galloping course.

Two days later on Friday 8th November at Hexham, Bingo d’Olivate ran in the 2 mile Weatherbys VAT Services Handicap Hurdle.   Again he was ridden by Brian Hughes and was very keen during the first part of the race.   The ground was probably not as testing as described which was a disadvantage for him. He was also very gassy but his jumping was excellent and he was right in contention until he hit the hill when he started to struggle and finished eighth. We will give him a break now and maybe he would prefer a flatter track. 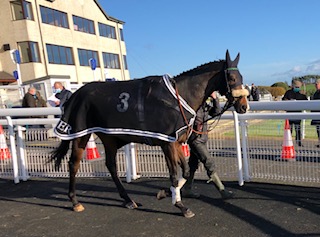 Bingo D'Olivate in the paddock at Hexham

On Saturday 9th November, we were at Aintree with Charmant (Brian Hughes) who ran in the Class 3 Download the App at Virgin Bet Handicap Chase over 2 miles. He looked really well in the paddock and won best turned out and sported a Remembrance Day poppy on his plaited tail! The race was on the Mildmay course and was very competitive with the winner being awarded ‘performance of the day’. He was carrying top weight of 11st 12lb which was quite a burden and Brian took him wide so that he had a good sight of the stiff fences.   His jumping was excellent and he finished fourth only beaten by seven lengths and ahead of Solar Impulse who has won the Grand Annual Chase at the Cheltenham Festival. This was a very encouraging first run on ground quicker than he would have liked and he will come on a great deal for it. 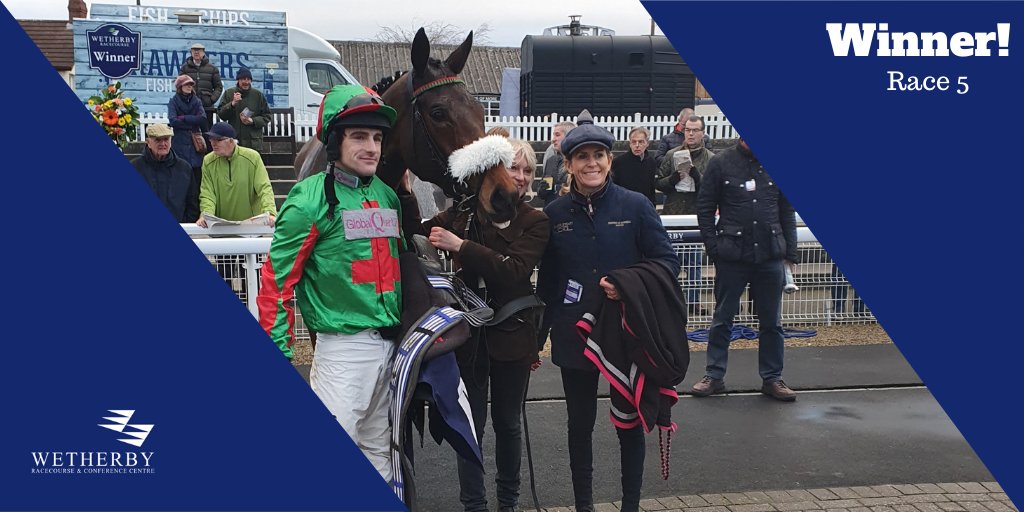 Charmant at Aintree with his beautifully plaited tail complete with poppy!

Ettila de Sivola had his second race over fences at Sedgefield on Thursday 14th November in the Black Friday CaselH Deals at Paxtons Novices’ Handicap Chase over 2 miles.   Brian Hughes was on board again and all had gone well with his preparation even though it was only 17 days since his last run.   This turned out to be rather a rough race and the horse was pushed around and bumped which did not help him.   However, his jumping was bold and held up throughout but the track probably did not suit him and he finished fourth.   He will now have a good break and we need to find him a race on a flat galloping track over 2 miles 2 furlongs. 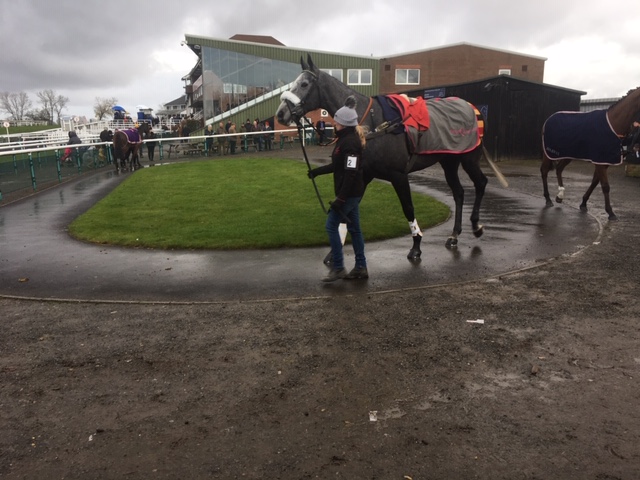 The following day at Newcastle on Friday 15th November, we had two runners and the ground was heavy and testing. Ross Chapman rode Bullion in the 2 mile 7 furlong Certax Durham Handicap Hurdle and settled him at the back of the tightly packed field which were going fairly slowly at this stage.   However, he was clearly not handling the going particularly well although his jumping was pretty good and he finished 10th.   We now know that he is not suited to deep, sticky ground and we need to find a race for him between 2 miles 4 furlongs and 3 miles on better going and a galloping track.

Into The Breach (Ross Chapman) had his first run over fences in the Logico Novices Handicap Chase over 2 miles 7 furlongs. They seemed to be going very fast for a Novice three mile chase in heavy going and were soon strung out.   His jumping was sound and with a circuit to go he looked to be in contention.   However, the combination of ground and stamina took its toll and he was pulled up.   He has recovered extremely quickly which shows how fit he is and we will try and find him a race from 2 mile 4 furlongs to 2 miles 6 furlongs in slightly less testing conditions. 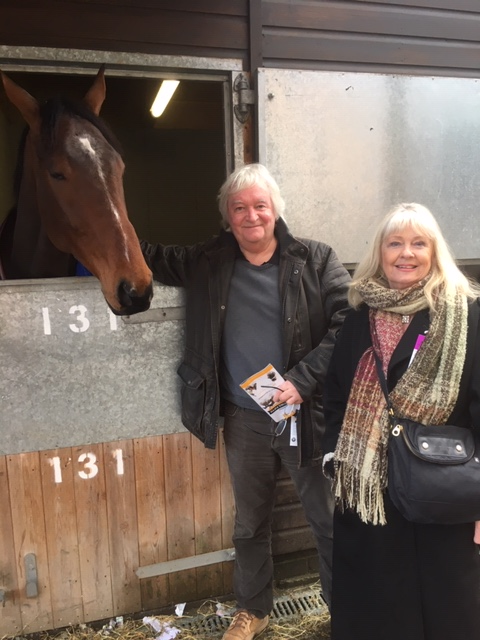 Amy Elliot is the youngest member of our team and helps us out when she can fit this in around her school schedule. A talented rider, she is now the proud owner of Nelliecro who will go Pony Racing.   Beautifully bred by Schiaparelli out of a Flemensfirth mare, she did not grow big enough to go into training and so Amy is now the beneficiary.   Tim Vaughan very kindly allowed the pony on his box going to Aintree and so we were able to pick her up from there. 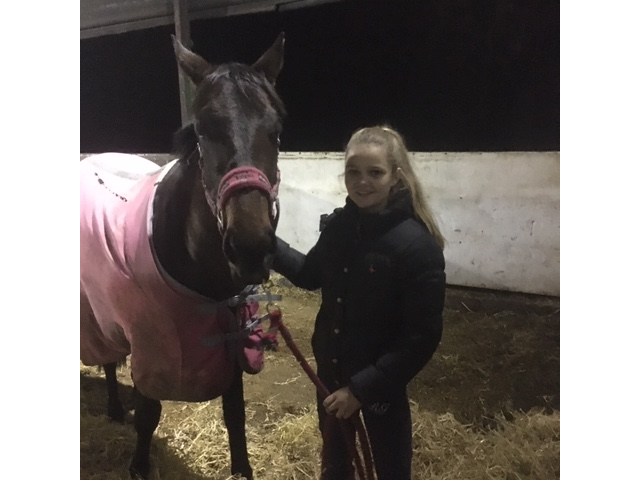 Amy Elliot is the proud new owner of Nelliecro 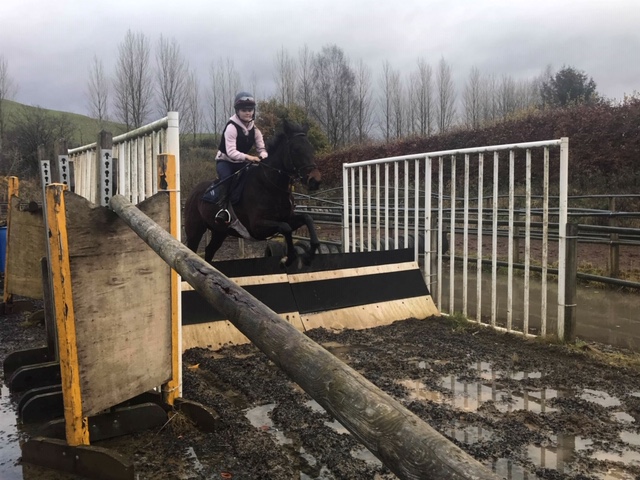 We have entries coming up at Hexham,Catterick, Musselburgh and Wetherby