We have had a good start to the new National Hunt season with three winners from six runners - all at Hexham.   We were delighted that Brian Hughes’s first ride back for the yard after his horrible fall in April was a winning one! Brian too has had a flying start and won the championship title of Stobart Northern Jump Jockey of the Year 2018/19.

For Three has been very consistent and at Hexham on Saturday 4th May he recorded his first win in the 2 mile Novice Hurdle.   He was just a little on his toes in the paddock but Brian Hughes jumped him off on the inside and gave him a brilliant ride.   It was a messy race as horses around him kept changing direction and leaning in on him but this did not prevent him from jumping well.   He had every excuse not to perform but battled all the way to the line for a very encouraging win by 3 ½ lengths. 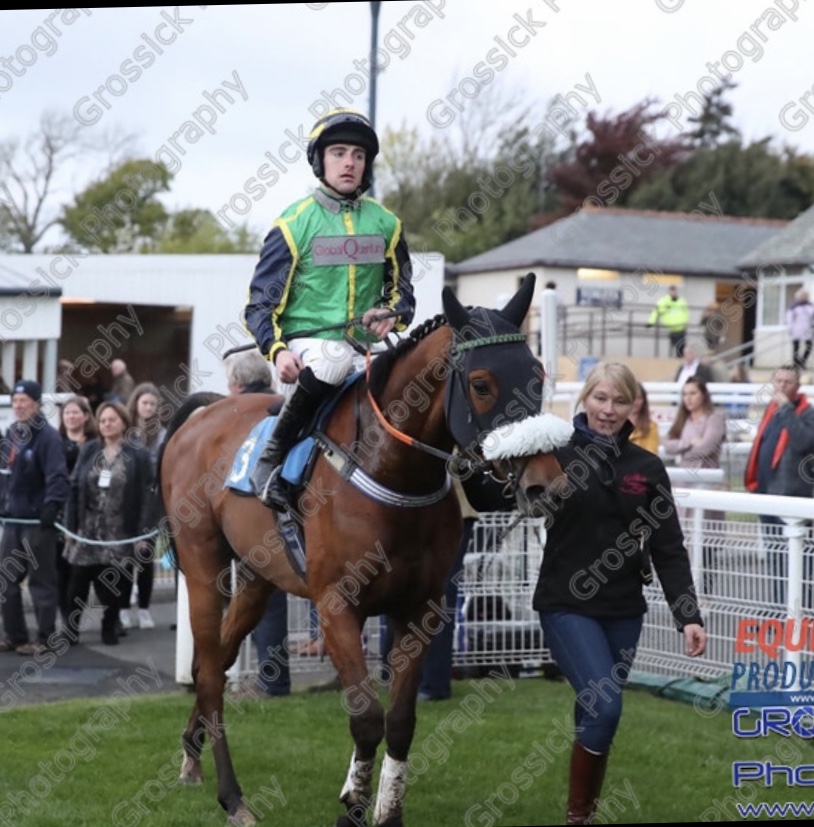 On Saturday 11th May again at Hexham, unfortunately things did not work out for Apache Valley with Billy Garrity in the Mares Novices’ Hurdle. She became very agitated at the start which is out of character and so perhaps she was over the top.   They went very fast from the start and the ground was probably a bit too quick for her and so she was pulled up.   She is only four and so has now been turned out for her summer holidays.

At the same meeting it was a different story for Civil Unrest in the 2 mile Handicap Chase where he recorded his 12th win and his record reads 12 wins, 13 seconds and 10 thirds from 64 runs!   Brian Hughes had not ridden him since July 2013 but they got into a lovely rhythm on the inside and jumping superbly, Cyril was produced very cleverly about a furlong from home with the rail help him for a memorable win.   This was also another for Willie Cowe who held him in such high regard as do his devoted and enthusiastic team of owners.   This was probably a career best for the horse as he has never won off a higher rating and aged 13 he continues to thrive on his racing and shows such a zest for life.   He is a great credit to James and the team who have kept him happy for so long. 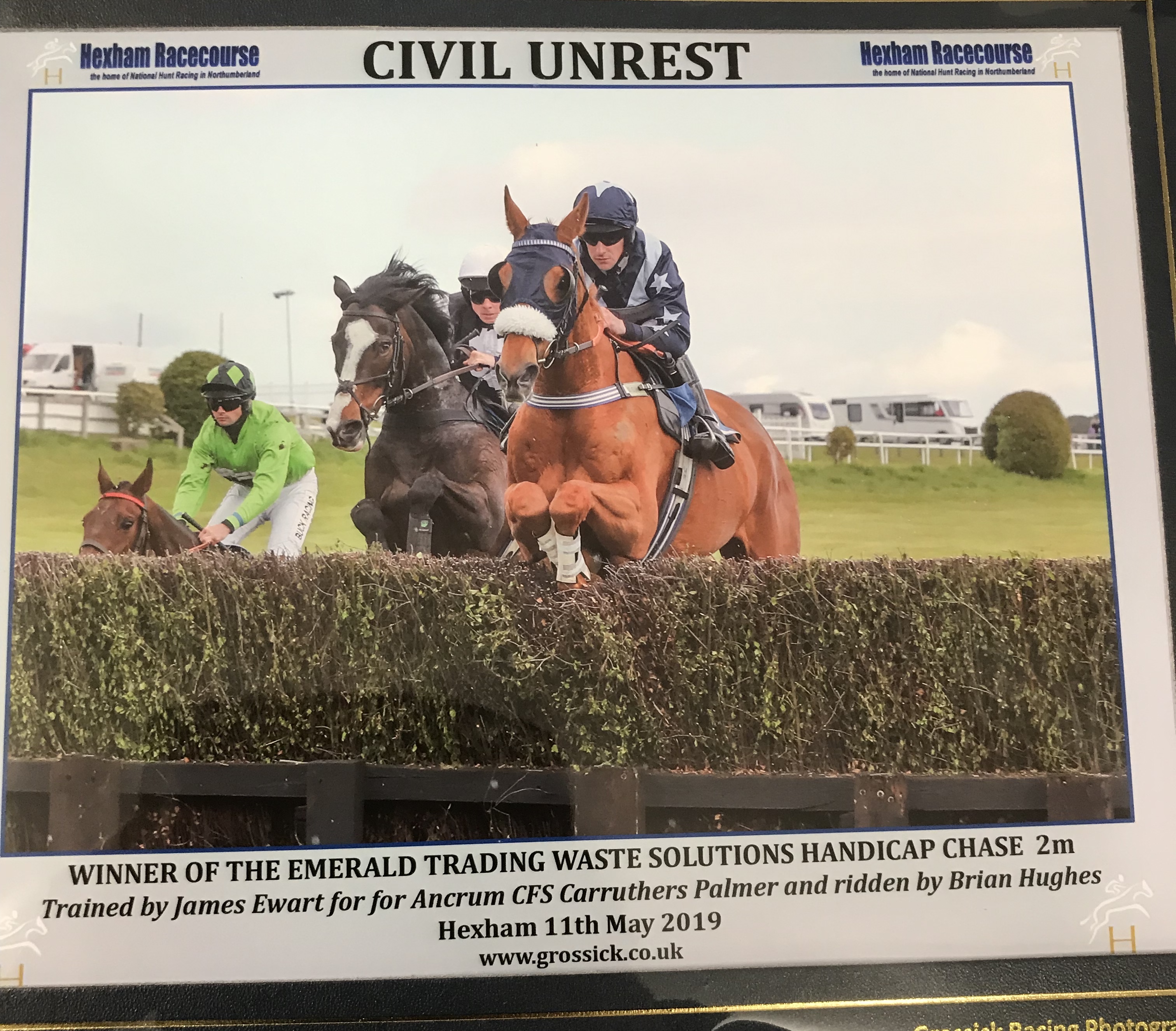 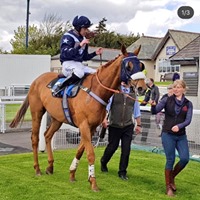 Brian’s third ride at Hexham was on Ueueteotl in the 3 mile Handicap Chase.   This was a very rough race but for much of it, he travelled and jumped really well.   However, coming round the home bend he received a severe sideways knock and was unable to recover from this.   He was likely to have been placed if it were not for this interference.   Brian also felt that on a stiff track a step back in trip would suit him better.

It was back to Hexham again on Tuesday 21st May with two runners Sleep in First and For Three both ridden by Brian Hughes.

This was Sleepy’s first run since October 2018 and this a pleasing return in the 2 mile Discover Northumberland Handicap Hurdle.   A couple of mistakes did not help and although he was a bit outpaced in the middle of the race he ran on strongly to finish fourth beaten by 13 lengths.

In the 2 mile Port of Blyth Handicap Hurdle, For Three was given a masterly ride by Brian. Settled nicely towards the back of the field, he was always in touch and again, his jumping was very accurate. At four out, the long- time leader Beyondtemptation sadly suffered a fatal fall – she was a seven times winner at Hexham and our thoughts are with her connections.   This then left For Three a close up third and he then ran on very well to win by 1 ¼ lengths and gave Brian his second consecutive win on this great addition to the Craig Farm Syndicate. 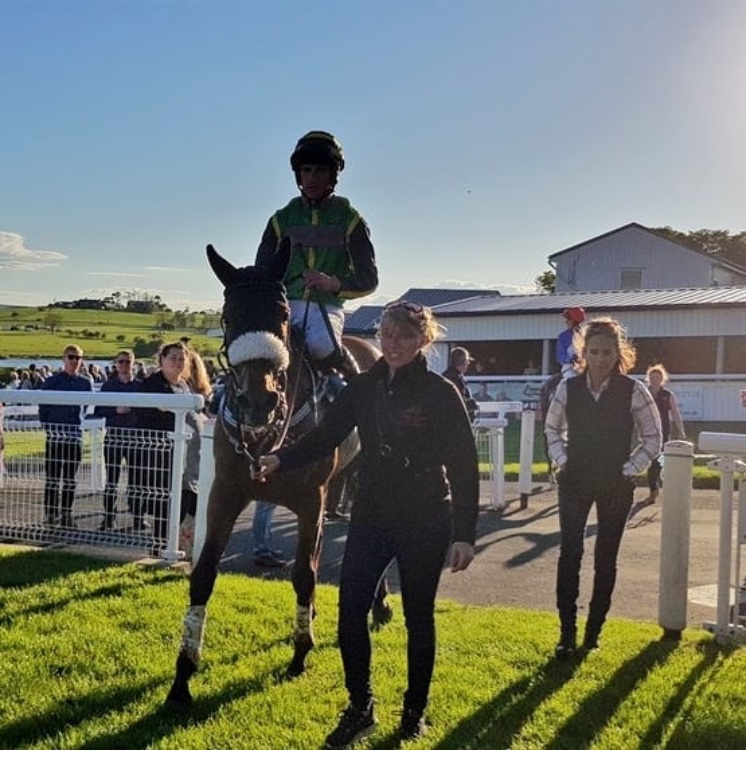 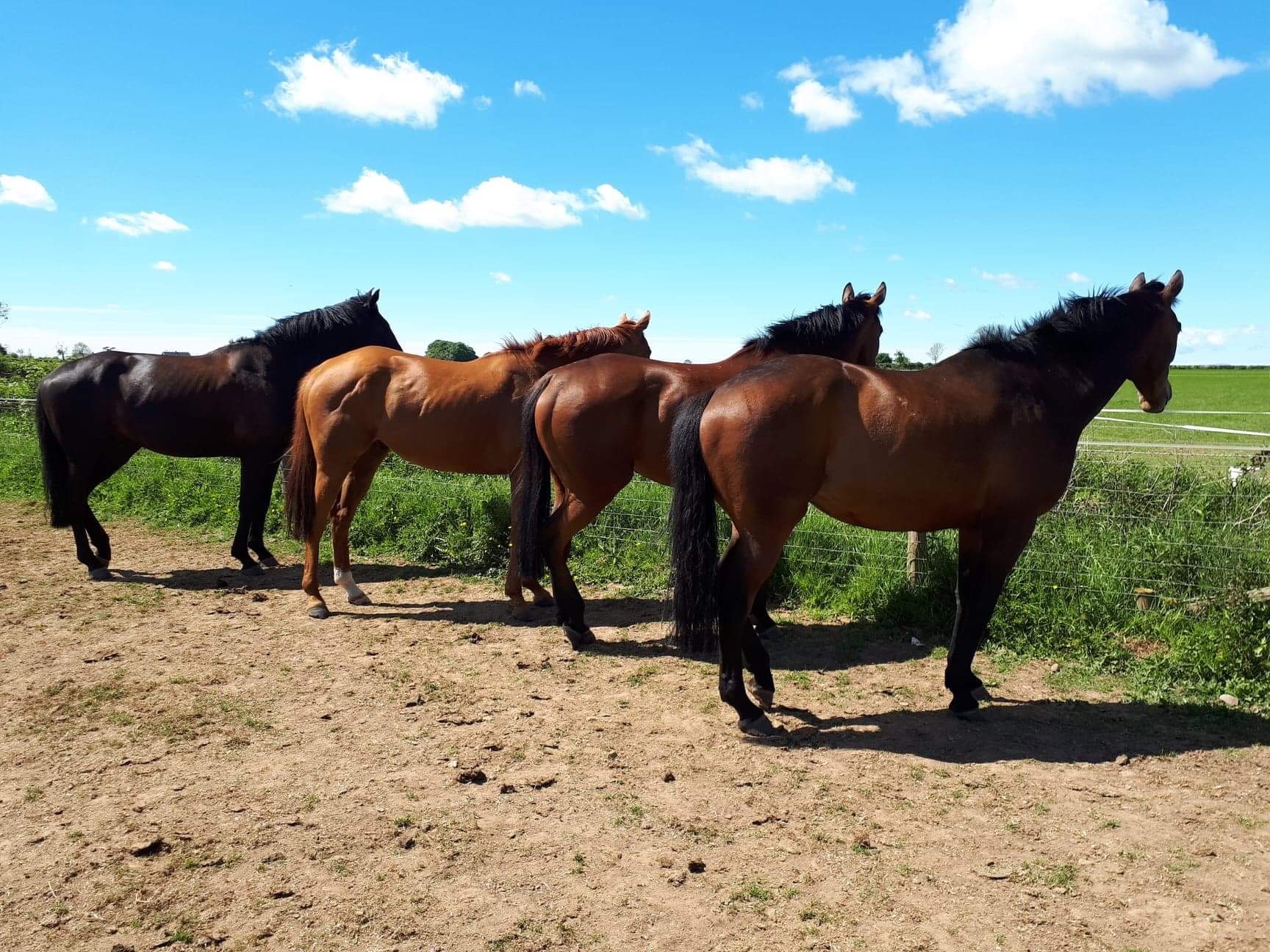 David enjoying himself on Lord Wishes 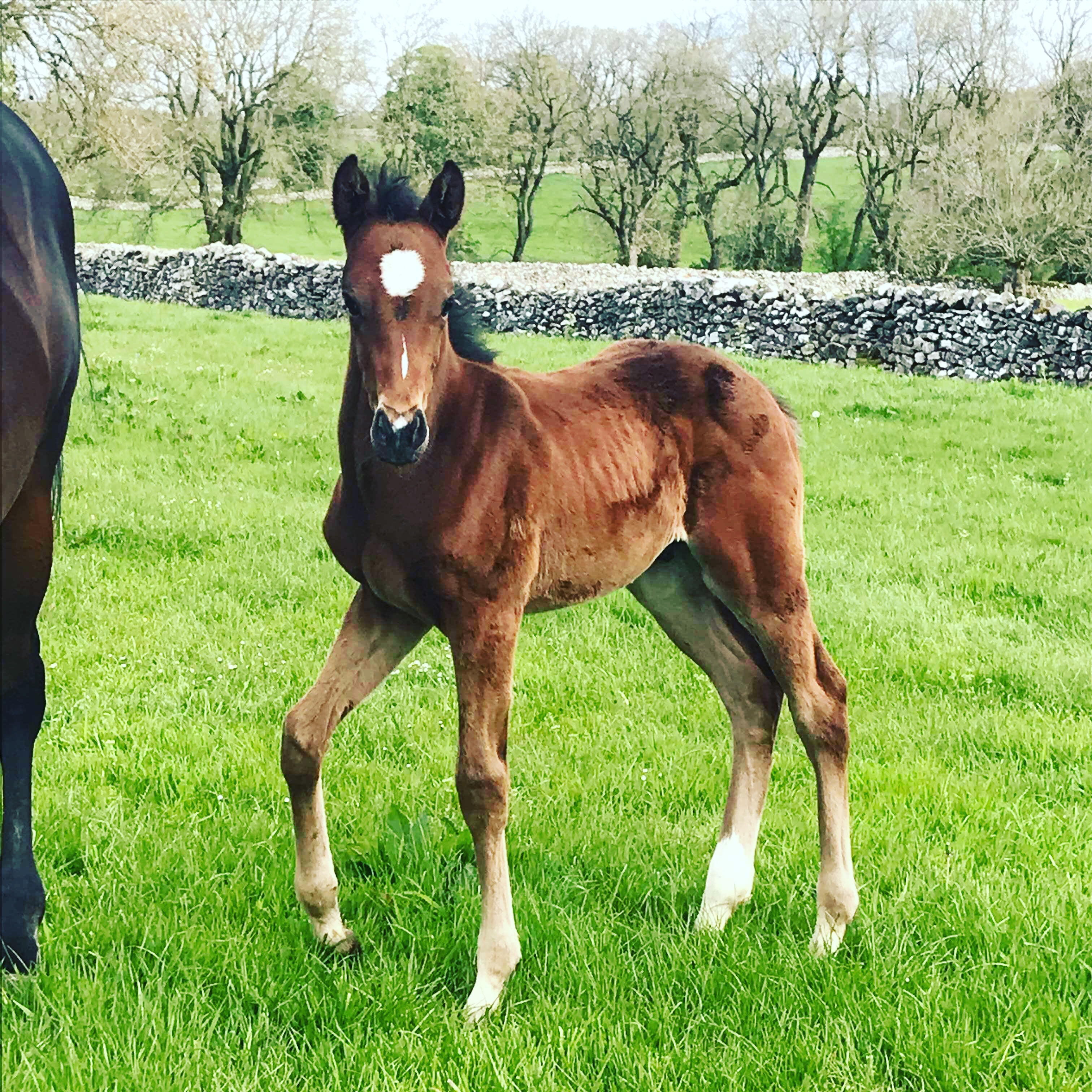 A new foal by Black sam Bellamy out of Think Green 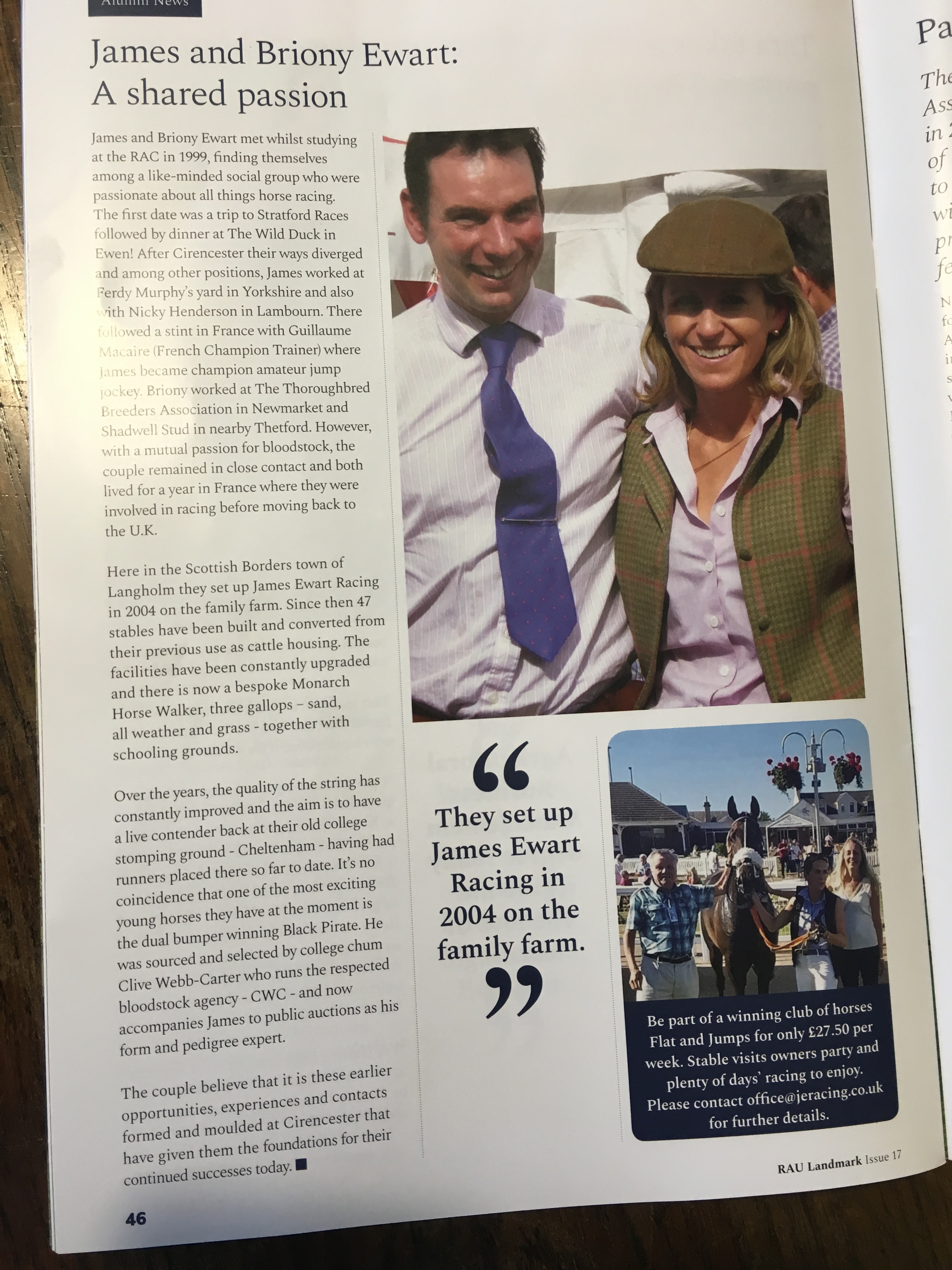 A nice article in Landmark - the Annual News Review for the Royal Agricultural University, Cirencester

We are now busy at home power washing, disinfecting and painting the stables and over the next week, we have entries at Cartmel, Kelso over the jumps with the summer racing now in full swing and on the flat at Southwell.