It is not easy looking after fit racehorses in these extremely icy conditions and yet again we are so grateful to our hard working and dedicated team who keep going during challenging times.  In order to make the sand gallop workable the trainer has to rise at 4.00 a.m. to rotovate  for three hours and Ian Earsman also comes in really early to salt and grit all the walkways to make everything as safe as possible so it is very hard work for everyone. 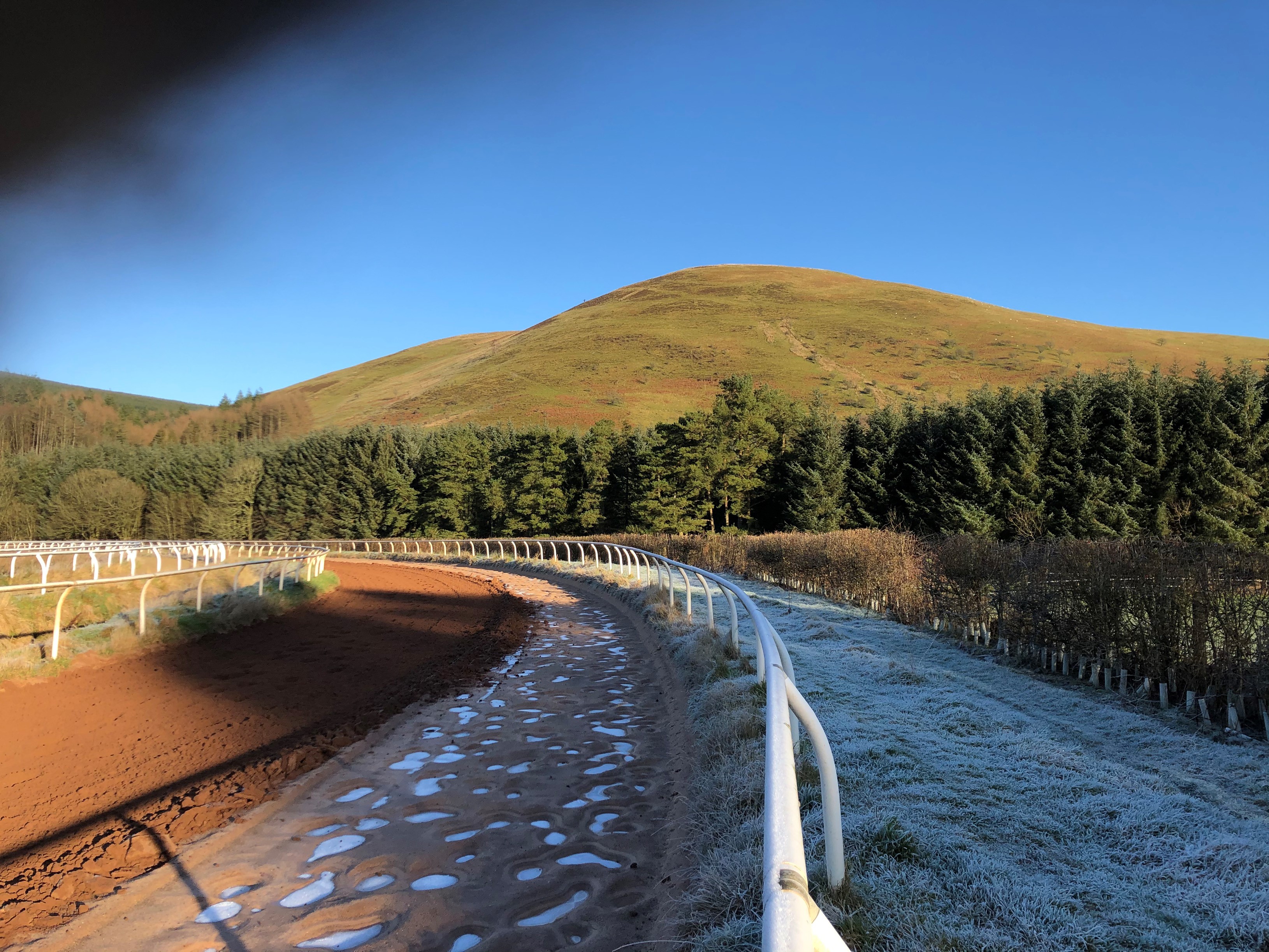 Before and After!   The results of Rotovating on the Sand Gallop

We have much enjoyed our owners’ Christmas gifts in the form of carry-out breakfasts from Pelosi’s in Langholm.   They are delicious and it is very kind of Christine to still provide these for us when the café is closed.

We were very pleased to hear that our long time owners Wilson and Margaret Graham have received their vaccinations in Carlisle.

It was great to end the year with a win for Empire de Maulde at Kelso for his owners Steve and Jessica Murrills and this was a fitting early present for Jessica’s birthday on the 5th January. 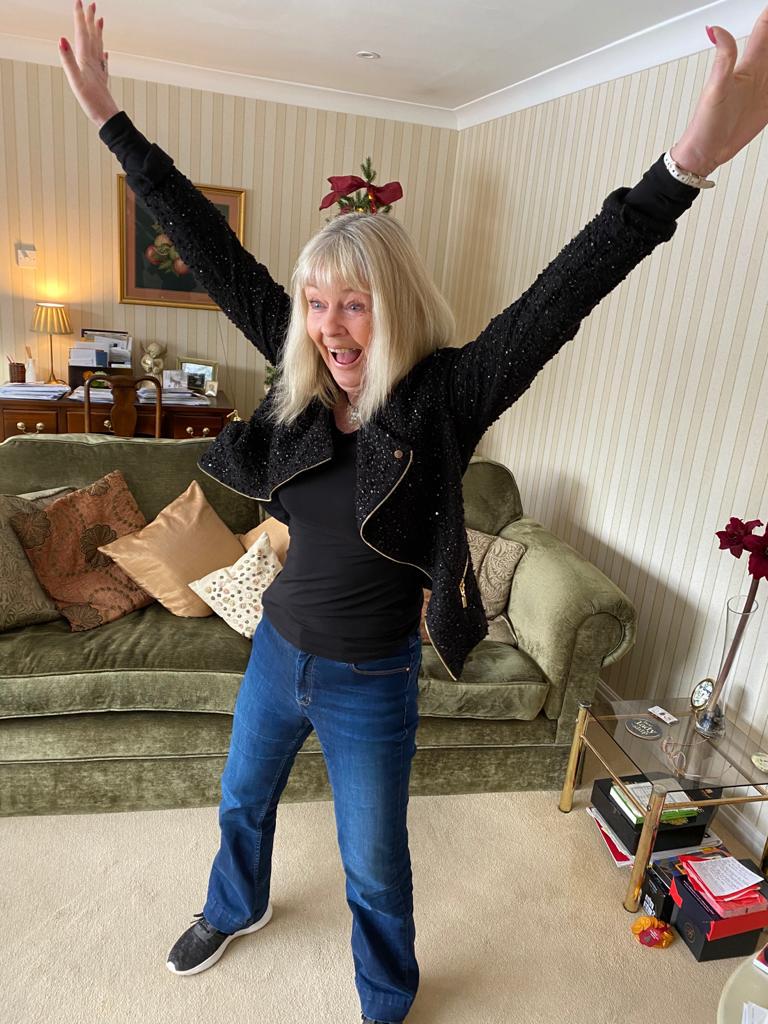 Charmant is in great form and was mentioned on ITV’s Opening Show by presenter Matt Chapman as being the market mover for his televised race at Ayr on Saturday 2nd January.    It was also confirmed on the show that racing would go ahead as planned at both Sandown and Ayr.   So imagine the disappointment  and frustration for Briony and Gemma  when they arrived at the racecourse to find that the meeting had been abandoned only one hour before the first race!

Calix Delafayette ridden by Danny McMenamin was having his second run over fences in the 2 mile Novices Handicap Chase.   This turned out to be a tactical affair with the bottom weight going off at a strong gallop and this meant that Calix was leading the rest for some of the time.   He mainly jumped well but just struggled with his breathing towards the end and he finished sixth.   As this was his first run since February 2020 he was very fresh which did not help and he would be better suited by slower ground and a slower pace to help him.

Cochisee was having his first run over hurdles in the 2 mile 3 furlong Maiden Hurdle and was ridden by Danny McMenamin.  His previous Bumper run had been at Hexham and he found everything at Musselbugh was happening too quickly and he took his time to settle.  When he started to show alarm signals on the all-weather strip, on turning in  Danny wisely decided to pull him up.

Brian Hughes rode Honourary Gift in the 2 mile 3 ½ furlong Handicap Chase but nothing was right for him.  He was fractious in the paddock and he could not handle the soft ground and was never happy and so Brian pulled him up.  He will now have a break and we will prepare him for the better ground in the Spring.

Tortuga Bay was having her first run over fences  in the 2 mile Novices Handicap Chase and made a very promising start.  Brian Hughes rode her with great confidence and her jumping was neat and quick over the first few fences but she was really exuberant down the back straight showing plenty of scope.  She was very clever to dodge the faller Dexcite at the last which lost her a little ground and she was then overtaken by lower weighted horses to finish fourth.   But this was a very good run  and Brian was very complimentary about her and she will be seen to even better advantage on a galloping track.   She is really enjoying life now and it is so encouraging to see her  starting to show her ability on the racecourse. 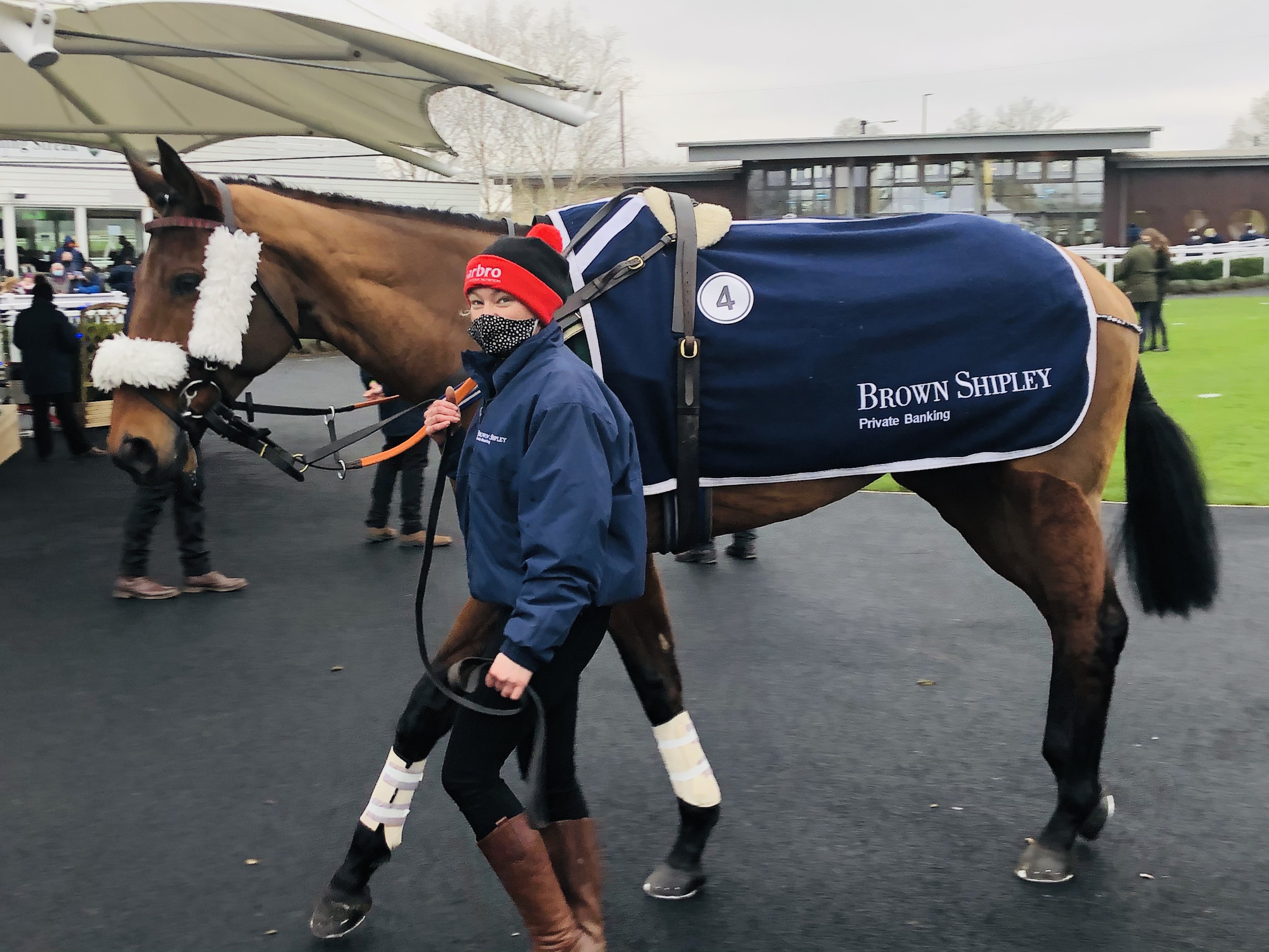 We had two runners here both of whom won the bto awards for Gemma.   What a well-deserved record she has!

Empire de Maulde with Rachael McDonald ended the year in great style by recording his second chase win in the Novices Limited Handicap Chase over 2 miles 6 furlongs.  From seven runs he has had two wins, a second and a third and so he is very consistent.   He settled well for Rachael and he jumped accurately and was clever when getting in close to a fence.  He only made one mistake but this did not lose them any ground and he jumped into the lead over the last to win with a flourish by 1 ¾ lengths!  He does get a little bit distracted when in front and he wandered around a bit but this was a lovely run. 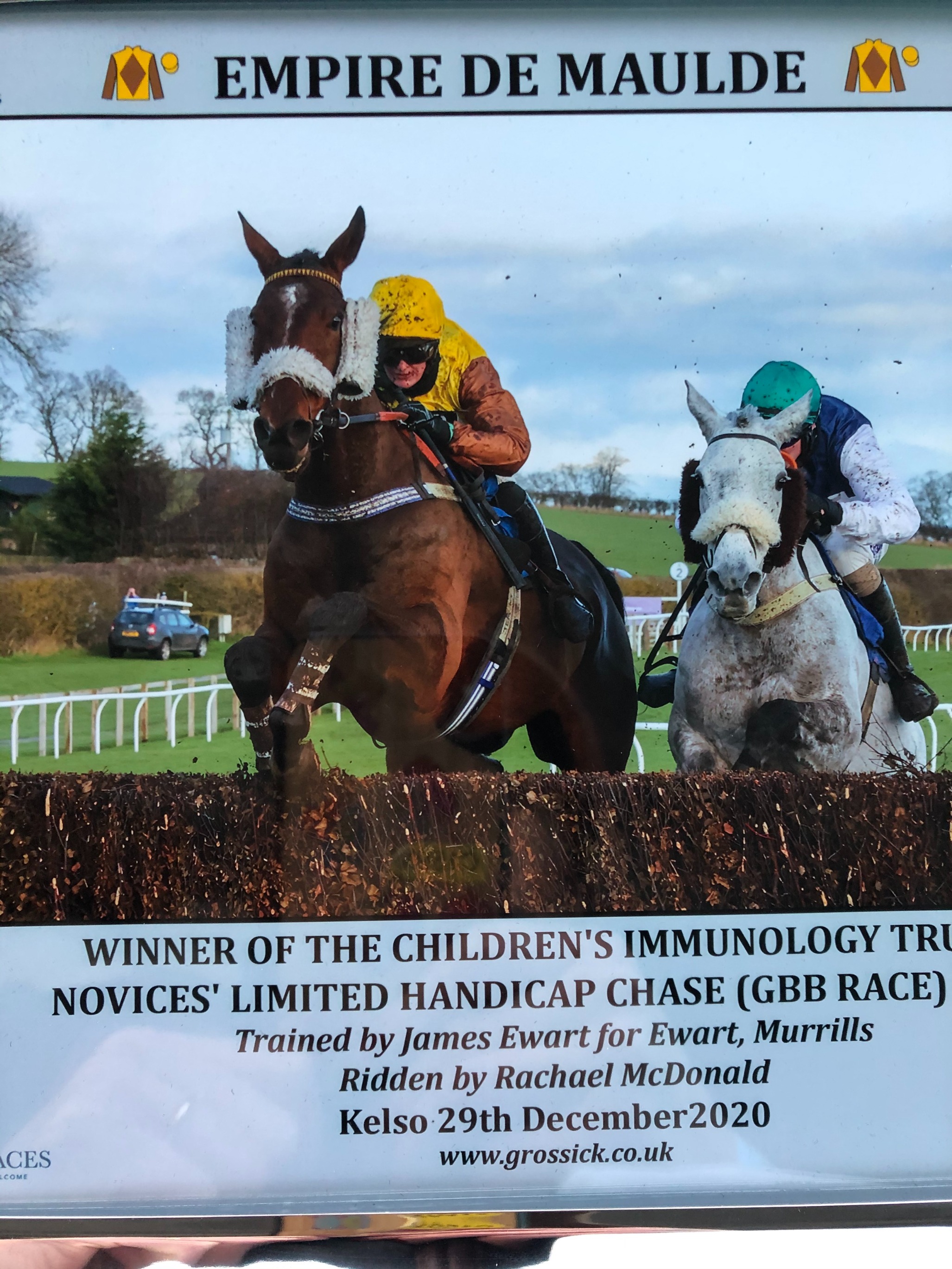 We also ran Lake Takapuna with Rachael McDonald in the 2 mile 1 furlong Handicap Chase.  He looked great in the paddock if a little quiet but they had removed the fences in the home straight due to low sun which we knew would not be to our advantage.  He did not enjoy the soft ground and could not use his jumping ability in these conditions and so was soon shuffled back to finish fifth.   We will now wait for the better ground and he would also appreciate a galloping track. 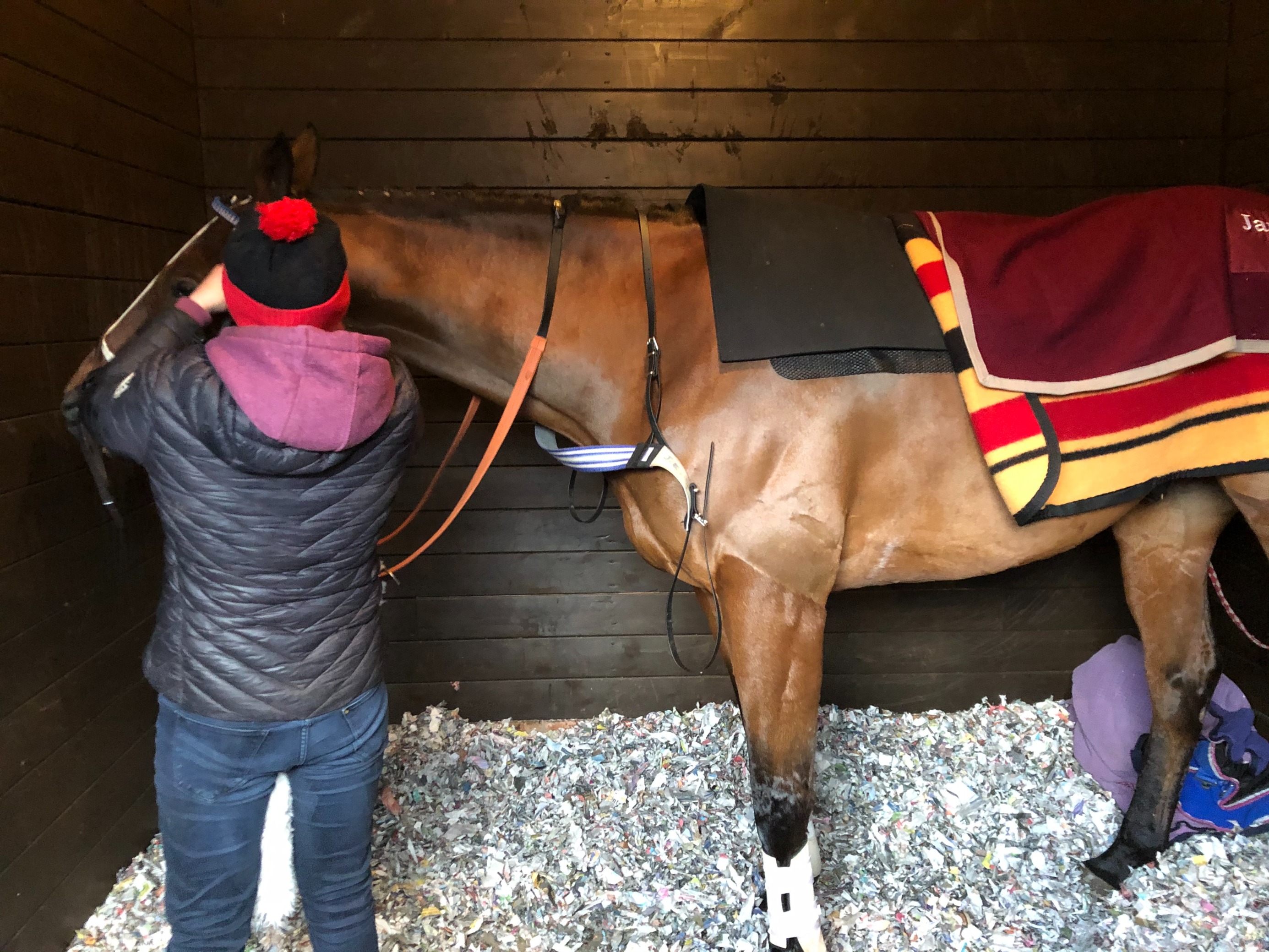 Danny McMenamin was on board The Blame Game (another bto for Gemma) in the 2mile 7 furlong Handicap Hurdle.  This was his first time over the distance which proved to be no problem at all.   He was right in amongst the tightly grouped pack and was in a nice jumping rhythm and had every chance turning in.   However, he then met a few traffic problems and so Danny switched to the inside which had the worst of the ground and two out he pecked and the lower weighted horses were able to get past him.  However, he stayed on and only just missed out on coming third to finished fourth.   He is still only a novice and will have learned plenty from this.  He also now will have a break and return again in the Spring.

Most racing is cancelled at the moment due to the weather but we do have entries coming up at Doncaster and Wetherby.