We are really into the swing of things now and all the horses are running well which is encouraging.   The yard suffered in the torrential rain last week when some of the stables were flooded and nobody can remember the river ever being so high.  A timely reminder on climate change as Cop26 began in Glasgow.

Our recent highlight was Empire de Maulde’s win in the feature race at Kelso on Saturday 23rd October for owners Steve and Jessica Murrills.  David Macleod had him spot on and this was his sixth win for us and he had also won four previous Bumpers in France so this is an impressive record at the age of seven. 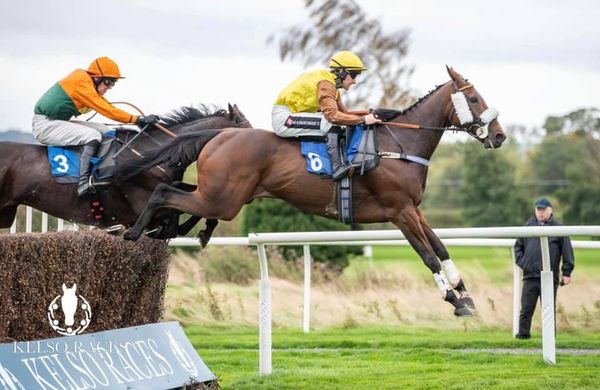 Empire de Maulde had a perfect prep for the Edinburgh Gin Chase at Kelso over 3 miles 2 furlongs after his previous run here over a shorter distance.   He looked fantastic in the paddock and won BTO for Briony, was race fit and carried bottom weight and so this was all in our favour.   Brian Hughes settled him on the inside and he was ridden handily and travelling well in a lovely rhythm when the tempo increased four out.  Brian bumped once in the saddle to keep him up to his work and this had a dramatic effect and with ears pricked he won, going away by three lengths. 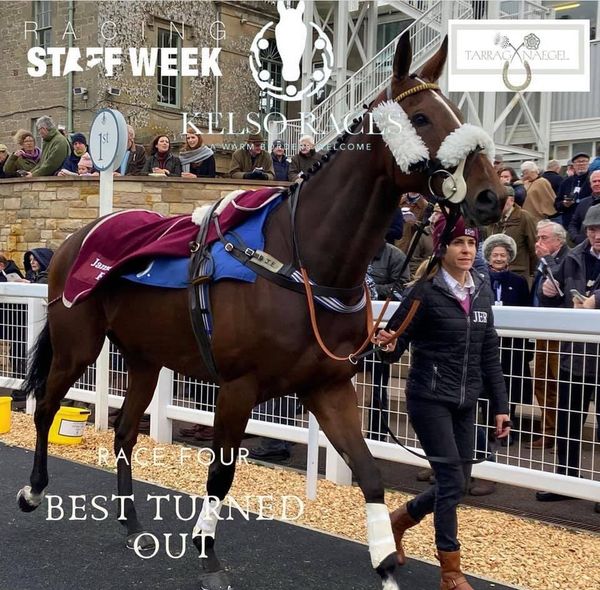 Empire de Maulde in the paddock at Kelso with Briony 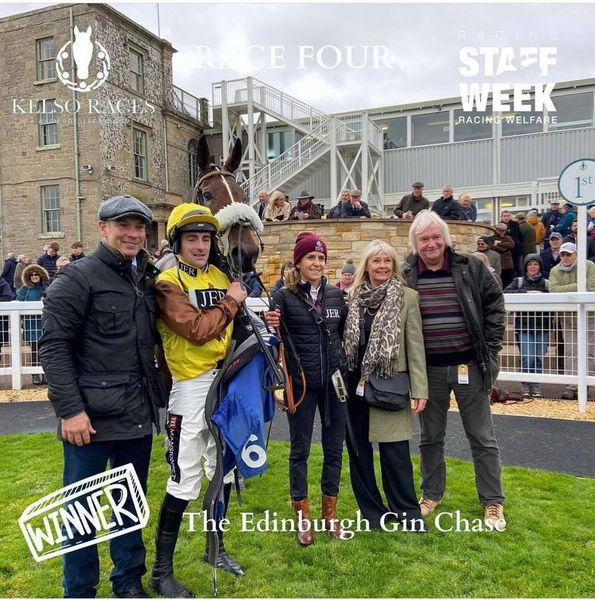 Proud connections in the Winner's enclosure

Muhtamar with Alan Doyle ran in the 2 mile Novices’ Hurdle and he was taken down to the start early so that Alan could keep him settled and this worked well.   He pulled very hard to start with and Alan did an excellent job in eventually getting him to settle.  Sarah Poole has done a great deal of work with him on this at home and also as a result of all Steven Fox’s schooling his jumping was great so this was a real team effort.  He jumped the last brilliantly and was in front only to be pipped at the post to finish second of nine by 2 ½ lengths.   This was a huge step forward and once he learns to settle he will be much more effective.

After all the rain we were lucky to be racing at Carlisle where we had three runners.

Alan Doyle rode Brayhill in the 2 ½ mile Novices’ Hurdle and this was a competitive race.   Alan set off strongly in the lead as we know the horse stays.   He was jumping very well although a bit to the left at times and he looked set for a great result when he ran out at the last hurdle and went through the wing.   It turns out that there was a gap in the rails just before the hurdle which was rectified for the next race.   So this was a huge disappointment but luckily Alan was not hurt and the horse is not injured although not surprisingly he is a little stiff.

Alan Doyle was on board again with Cellar Vie in the 2 mile 1 furlong Handicap Hurdle.  He set off handily on the inside and jumped right at the first two but as the pace quickened he improved and he was in with every chance at the last with four in a line.  However, he was just beaten by 4 ½ lengths and finished third of seven to two horses who already had a run under their belts.  This was a good effort.

Our last runner was Juge Et Parti (Brian Hughes) in the 3 mile 2 furlong Handicap Chase which was one of the feature races of the afternoon.  He did not have the very best of preparations with a couple of minor set- backs so was probably not just as race hardened as last time.  Brian set off on the inside but soon realised that this was the worst of the going by this stage of the meeting and so he was switched to the outside to get a better sight of the fences.   He is a natural jumper and tucks up his front legs so neatly and was in a great rhythm throughout the race.  He was right there turning in but was always just held by the front two southern raiders to finish third of nine by 5 lengths. This was a great performance by a Novice and the way he finished suggests that he could stay further.  The softer conditions were no problem and there are possibilities later on this month at Ayr and Newcastle.

We have runners coming up at Musselburgh and Kelso.