Thankfully the yard appears to be returning to normal and most of the horses are running well.   During the first week of 2020 we had 13 runners and another winner and so this was a busy time.

On New Year’s Day we ran three horses at Musselburgh and one at Catterick.

At Musselburgh, Beat Box ridden by Danny McMenamin had his second outing in the 1 mile 7 ½ furlong Juvenile Hurdle. This was a big improvement on his first run - he was far less green and showed great attitude to finish fourth.   Danny thought he would be better suited to a galloping track and we will aim him at the Juvenile Hurdle at Newcastle on 20th January.

At Musselburgh, Lake Takapuna had his debut for the yard in the 2 mile 4 ½ furlong Auld Reekie Chase.   Ridden by Lucy Alexander he was held up towards the rear and although he jumped superbly he could not go the pace in this competitive race. Some  good horses were pulled up behind him but he has come out of the race bouncing and has been dropped 5lbs in the handicap. He needs to run fresh with good going for future races.

Aristo du Plessis ridden by Lucy Alexander ran in the Hogmaneigh Handicap Hurdle – a race he  won in 2016.   This was not his day and he was taken on from the start and was not happy and so Lucy wisely pulled him up. We will look for a race on a galloping track and slower ground.

Tortuga Bay with Nathan Moscrop were at Catterick on the same day and she was making her first start over hurdles in the 1 mile 7 ½ furlong Maiden Hurdle.   Unfortunately, she was disappointing and at no point was she travelling at all. She shows speed and gears at home and so this was frustrating but we will look for a course that should suit her better for her next race.

The following day, Wednesday 2nd January we were at Ayr in very wet and windy conditions with the going soft and heavy in places.

Sao Maxence was returning from a long lay-off and also having his first run over hurdles in the 2 mile Novice Hurdle.  He had previously shown good form in Bumpers on heavy going and Brian Hughes had him in a great rhythm on the inside and his jumping was excellent.   He travelled well throughout the race to finish second by two lengths and the first two pulled 12 lengths clear of the third horse so this was a very good performance.

Brian Hughes was on board again with Un Guet Apens in the 2 mile Handicap Chase. Although Getty loves the heavy going, two miles is just too sharp for him and he could never get on terms. However, the handicapper has dropped him 5 lbs and we will aim to return to Ayr on 19th January over a longer distance.

On Thursday 4th January it was Newcastle with two runners.

Feetronie de Kervi ridden by Lorcan Murtagh ran no sort of race at all in the Mares Bumper on the Tapeta and it is back to the drawing board with her.

Bluefortytwo (Nathan Moscrop) was returning after an absence of 273 days to run in the 2 mile Handicap Hurdle and he ran a really good race and at one stage looked set for a place. His jumping was straight and true which was an improvement on previous runs but he just needed a blow three out and so he will come on a good bit for this run and he may return to Ayr on the 19th January for a Maiden Hurdle.

On Monday 6th January it was another wet and windy day at Ayr with heavy going and we were kept busy with five runners.

Dunly had shown good form two years ago in his Bumper starts but since then had been rather disappointing.   However, he seems to like Ayr and this time in the 2 mile ½ furlong Handicap Chase where he won BTO, Brian Hughes set off very positively on the inside and had the horse in a lovely rhythm throughout.   He jumped superbly and won nicely by four lengths. This was a good performance and I hope we can build on that.   We believe this was Brian’s 60th win for the stable and helped him keep up the pressure on Richard Johnson! 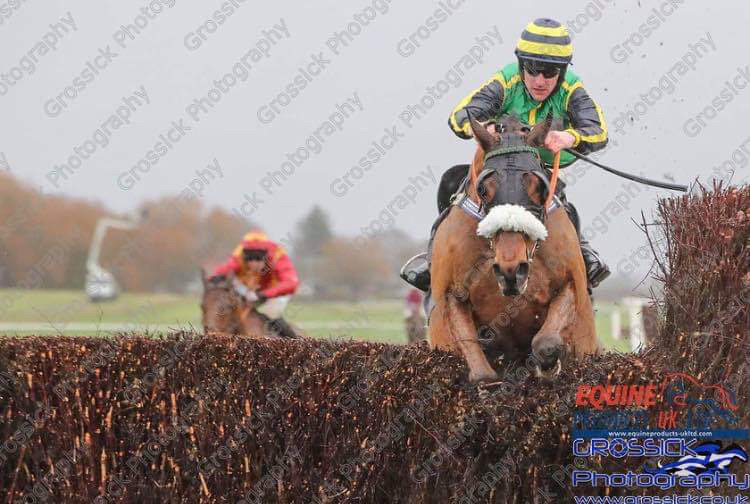 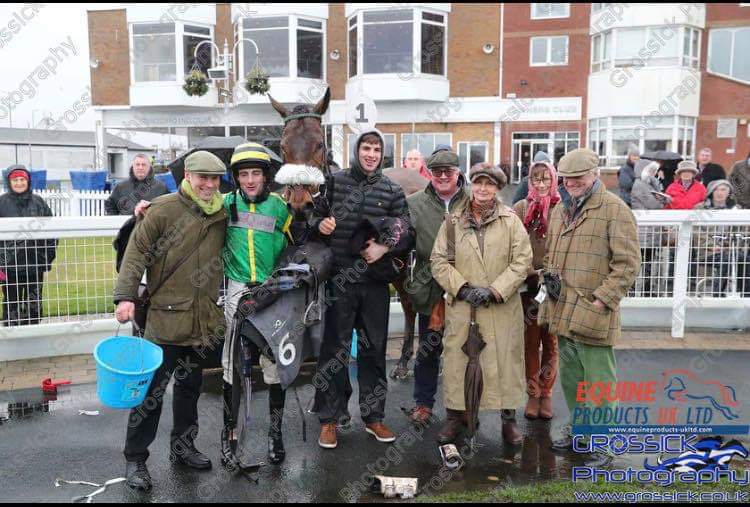 Dunly in the winner's enclosure at Ayr

Into the Breach (who won BTO) with Rachael McDonald was in the same race and in first time cheek pieces, he was very keen and took on Dunly which was not the plan!   He jumped to the right throughout and also was rather wide around the bends . Unfortunately, he pecked badly two out and unseated Rachael, otherwise he might have been placed. However, this was a big improvement over his previous run.

Ettila de Sivola was ridden again by Brian Hughes in 2 mile ½ furlong Novices’ Handicap Chase. Brian set off in the lead and once again the horse jumped well but he had been in front for a long time and was just picked up after the last by two other horses staying on and carrying far less weight.   He was only beaten by three lengths to finish third and this was another good performance.   At six he is still a young horse and probably would benefit from a longer time in between races.

Calix Delafayette (Brian Hughes) had missed two seasons with a very bad bout of colic. In view of this, his handicap mark is still high but he ran a promising race in the 2 mile Handicap Hurdle to finish third. In France they have a much better system for horses who have been absent for a long time and his handicap mark there would have been significantly reduced but it was great to have him back.

Aquitaine Boy with Nathan Moscrop up ran in  the 2 mile Bumper was not very happy on the heavy ground but he is a horse for the future.

We are so fortunate in having such a committed team who do so much hard work day in and day out to keep the horses healthy and happy. Sarah Poole is a very important part of the team and this season she has had another daily task!   Black Pirate injured a tendon during the summer of 2018 and because of his ability it was decided to give him the whole of last season off.   His rehabilitation included a swimming session after he came in from grass and now he receives a daily spa treatment overseen by Sarah.   This involves placing both his front legs in a whirlpool spa boot with iced water and Epsom Salts. Sarah is so dedicated that she even meets him off the lorry after racing but her attentions have been well rewarded with the horse’s win at Wetherby.   Credit should also go to Steven Fox his work rider who has done such a good job with him. 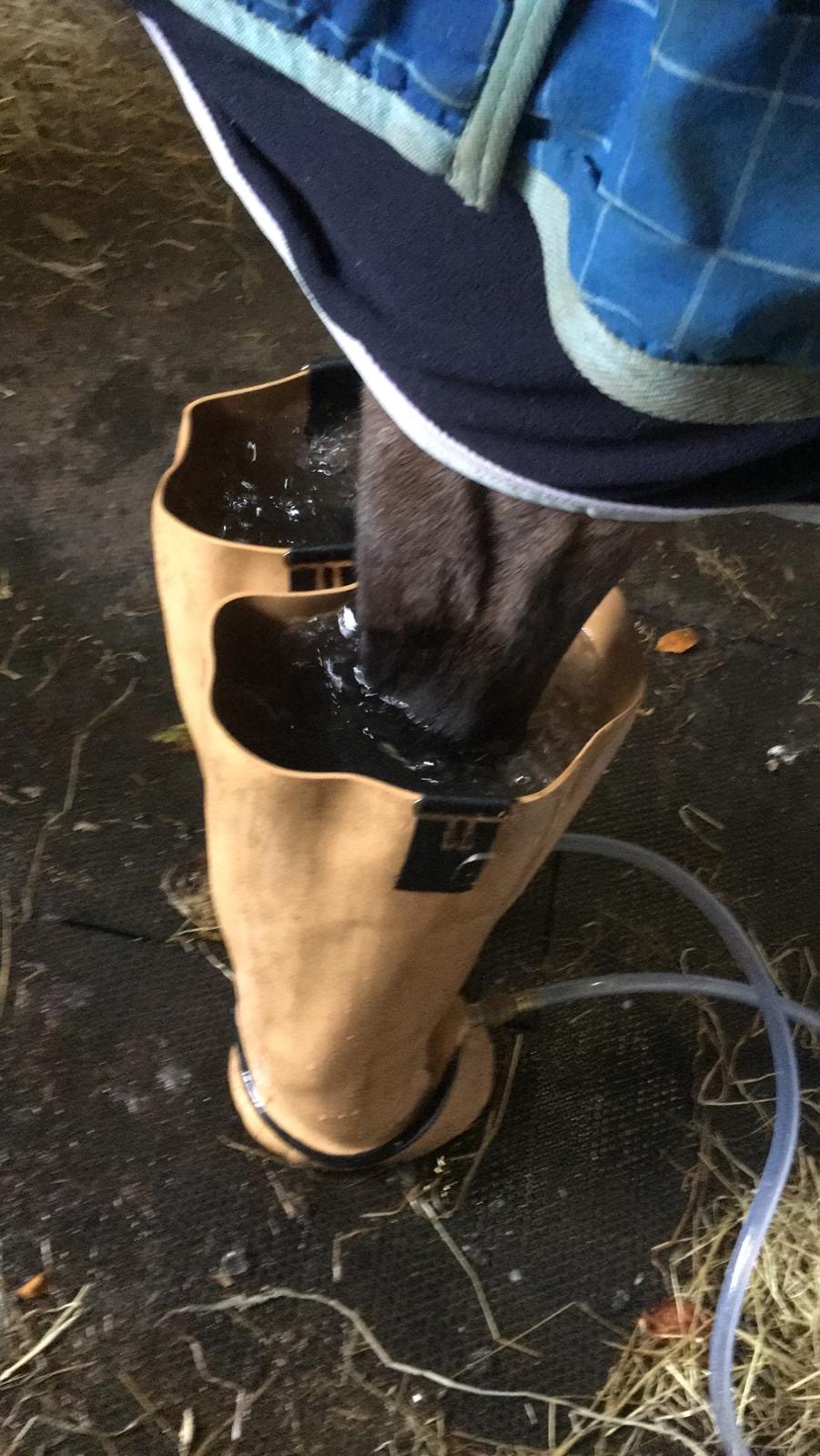 Where are they Now?

As reported in an earlier blog our stable star Civil Unrest was retired to a vet near Hawick during the summer.   We were delighted to receive the picture below of Cyril enjoying his hunting with the Jed Forest.   It gives us particular pleasure to find suitable homes for our horses after their racing days are over and many of them go on to have a happy and successful second career. 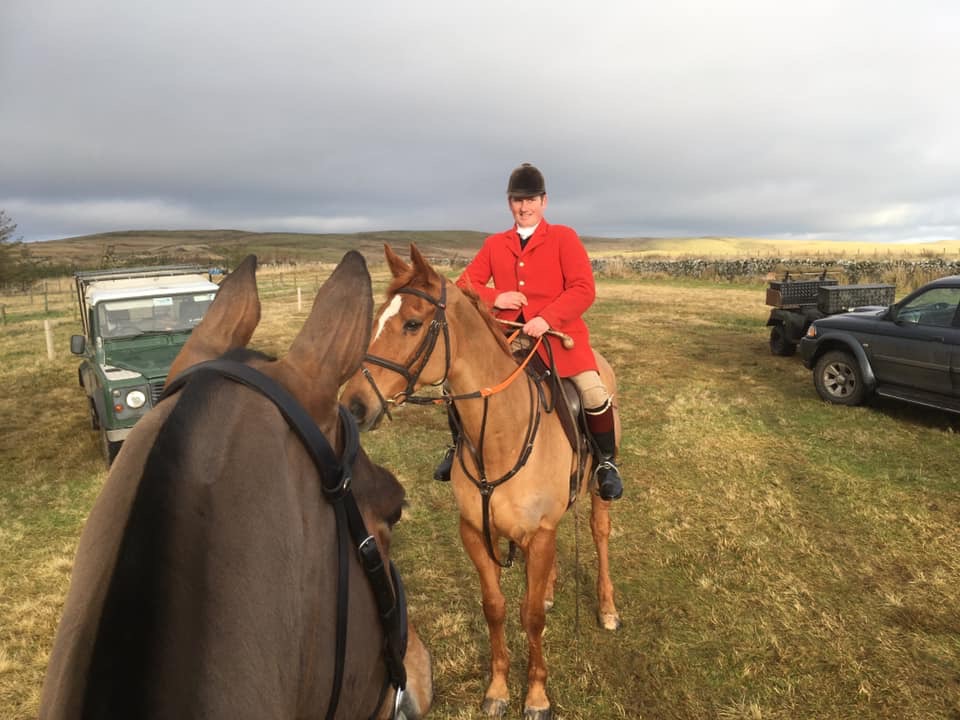 Civil Unrest enjoying himself out with the Jed Forest

We have entries coming up at Kelso, Doncaster, Market Rasen and Ayr.