Most of the horses are now enjoying their holidays out at grass and we will just have a few kept in training through the summer where there are still good prizes on offer. 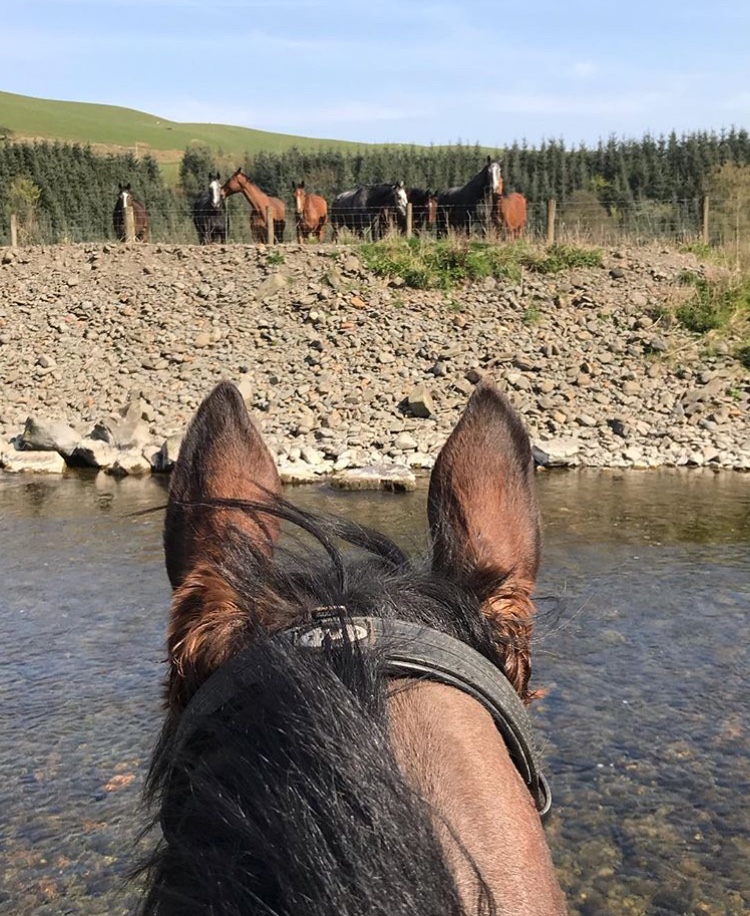 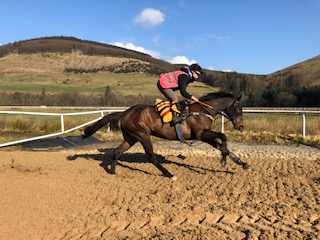 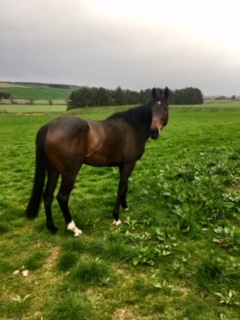 What did you say?   Feetronie de Kervi down in The Borders

At Hexham on Monday 15th April we had two runners.   In the 2 mile Novice Hurdle, Honourary Gift was ridden by Steven Fox and he finished 4th out of 12 beaten by 12 ½ lengths.   This was quite a competitive race and the winner Glinger Flame is well regarded by Nicky Richards. We fitted earplugs and hood and Honourary Gift behaved very well both in the paddock and at the start where there was a delay.   He jumped and travelled well throughout the race and was not helped by losing a shoe on the bend turning into the home straight but this was good effort. Possibly, he would be more suited to a slightly flatter track but this was another promising run and we are hoping he will go Novice Chasing next season.

In the 2 mile 4 furlong Mares’ Novice Hurdle, Apache Valley with Danny McMenamin was having only her second run and this was her first over hurdles.   She jumped particularly well throughout the race and for a four year old, the distance was just a bit too far on this demanding track, so next time we will drop her back to two miles for another mares’ race at Hexham.   She has a delightful temperament, was thoroughly professional throughout and this was an encouraging start over hurdles. She has come on for the run and could be an interesting dual purpose horse for The Craig Farm Syndicate.

On Easter Sunday 21st April, Gemma and Briony set off early heading south for Southwell with I Am Dandy who ran in the Darby Memorial Handicap over 7 furlongs. Arriving at 10.00 a.m. this worked very well as it avoided any problems with heat and traffic. He won best turned out yet again and looked magnificent in the paddock. Gemma cleverly arranged for Paul Hanagan (Champion Jockey in 2010 and 2011) to ride and he was full of praise for the horse who handled the track and the kickback with no trouble but he was disadvantaged by the very wide draw. It was to his great credit that he was so game and galloped right to the line to finish 3rd only beaten by 1 ¾ lengths. There was an interesting comment from Sally who nobly washes all the colours after racing and noticed the amount of fibre sand which had stuck and completely obscured all colouring in the silks.   So this was a brave performance and he is a great horse for The Craig Farm Syndicate. 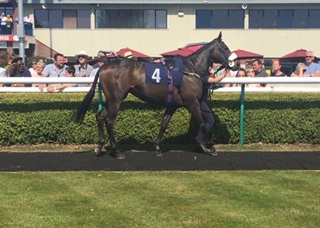 I Am Dandy at Southwell

Civil Unrest does not know how to run a bad race and at the age of 13 still shows such great enthusiasm for his racing.   On Tuesday 23rd April he went to Sedgefield to run in the 2 mile Handicap Chase ridden once again by Steven Fox. He jumped and travelled extremely well but just could not go the pace of the pillar to post winner and finished second beaten by 10 lengths.   Also probably the course does not suit him as well as tracks like Carlisle or Hexham.   The handicapper has now   reduced his mark to 107 and this will allow him into the race at Cartmel on the 29th May.   He was really happy to be back in action.

With the Perth Festival last week and the Sandown finale on Saturday 27th April where the imperious Altior notched up his 19th consecutive success and the champion jockey, trainer and owner were crowned, the 2018/19 Jumps season has come to an end.   It is time to reflect on the triumphs and disappointments and look forward with excitement and hope for good things to savour in the coming season.

Blogs will be issued from time to time over the next few months so enjoy the summer and remember the Owners Day on Sunday 1st September!