Back to Winning Ways

We have had a very welcome return to form with our recent runners and two winners in the last week.   Brayhill  lived up to his point-to- point form to win his first race over hurdles at Carlisle on the 21st March and we are delighted to welcome Jimmy Fyffe as an owner who has bought a share in the horse.   Tortuga Bay was our second winner for Ann Fraser at Newcastle  on the 30th March.   This was her first win over fences at the third attempt and this was well deserved as on her previous run at Sedgefield six fences had been removed which did not suit her at all. 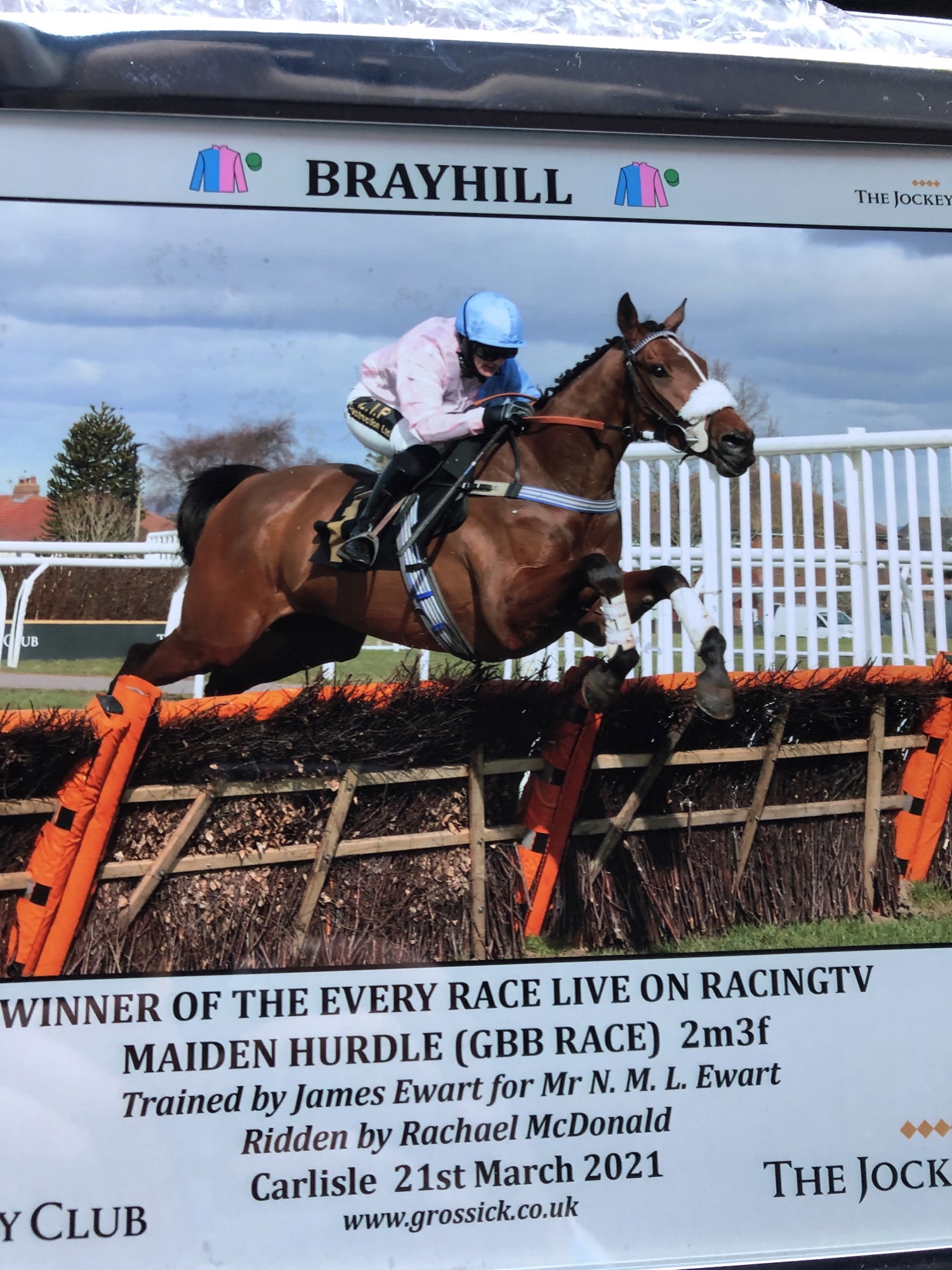 Tortuga Bay in the stabes at Newcastle

Rachael McDonald rode Brayhill in the 2 mile 3 ½ furlong Maiden Hurdle.   He was keen to get going but was thoroughly professional and relished both the course and the trip.  Travelling for most of the way in third or fourth he was well positioned behind the Brian Ellison leader who set a strong gallop which suited us.   He needed to be niggled a little down the back but once he got into gear he made up ground easily and won going away by 7 ½ lengths.   The time was good so this was an excellent performance by this promising young horse. 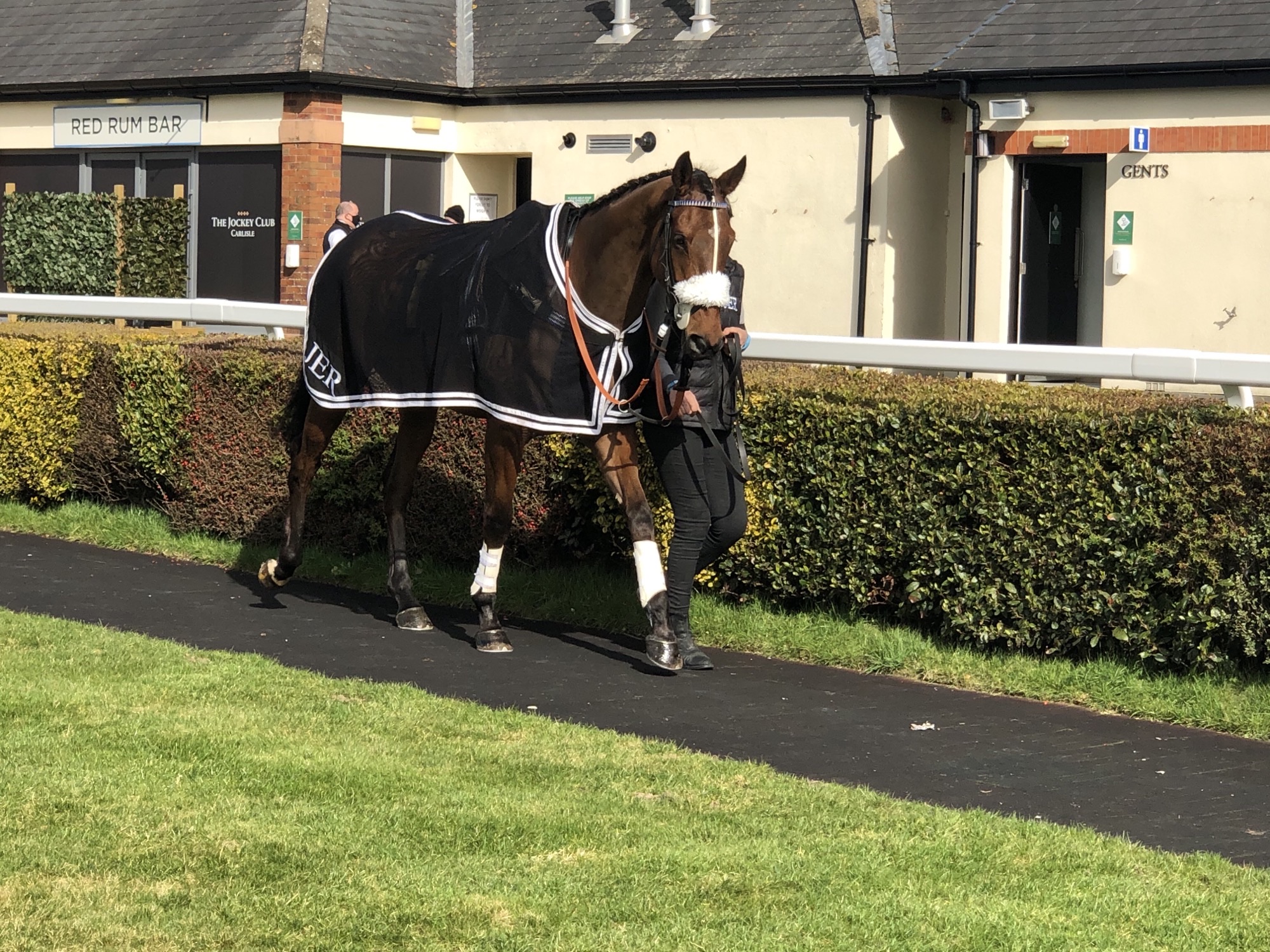 Brayhill in the paddock at Carlisle 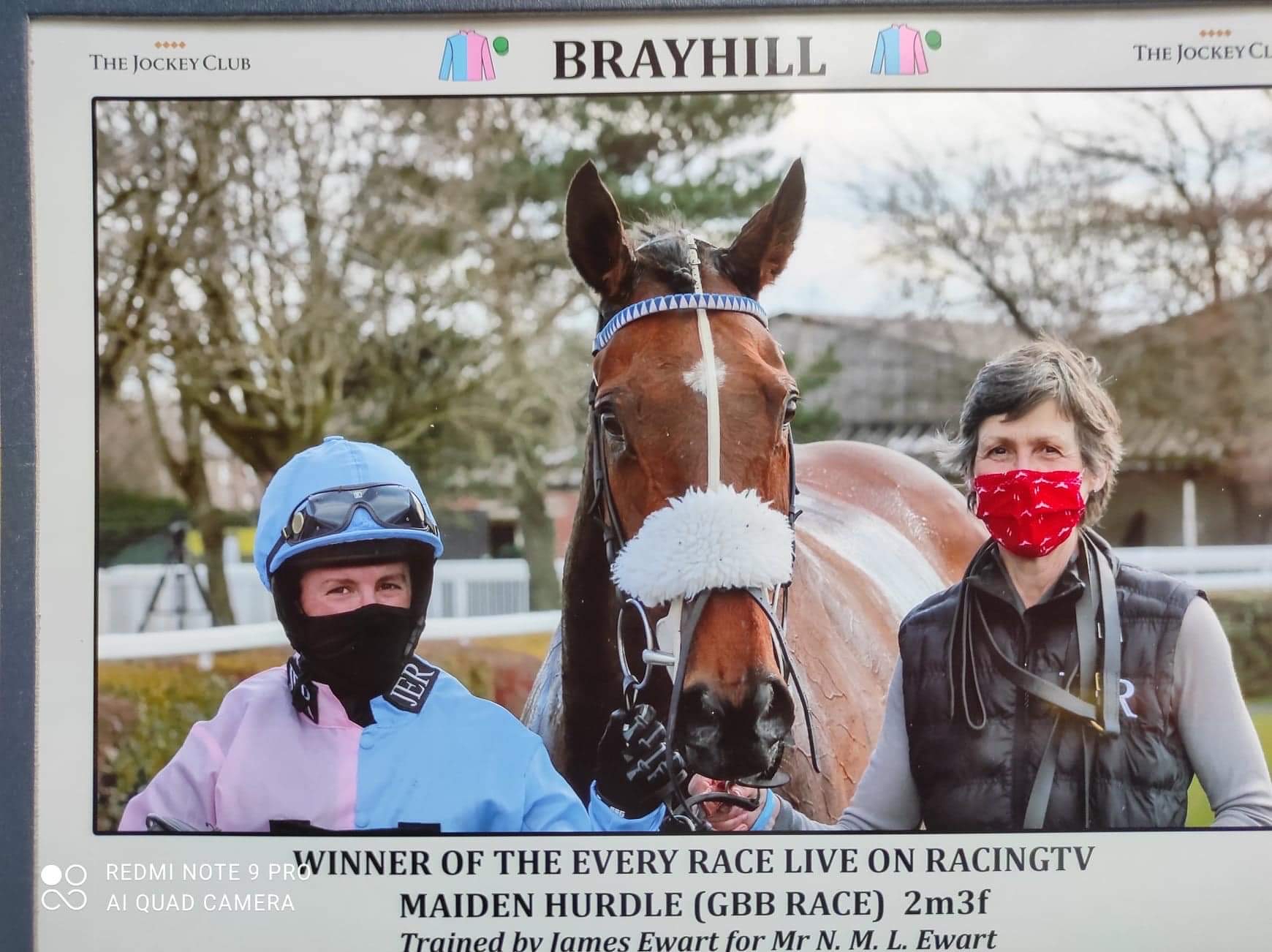 Cellar Vie was ridden by Brian Hughes in the 2 mile 1 furlong Novices’ Handicap Hurdle.   Unlike his previous race where he was able to dominate, this was better ground and a stronger gallop.   However, his jumping was good and straight but he just did not have the gears of the other horses and finished fifth.   His handicap mark is still too high and he will be better over fences.

Cellar Vie at Carlisle with Briony

Bingo D’Olivate with Nathan Moscrop was our final runner in the 2 mile 1 furlong Handicap Hurdle.   In the bright sunny conditions with a drying wind the going was not so suitable for him and he was carrying plenty of weight.   However, he jumped very well and is more confident over hurdles but he was almost brought to a standstill with a faller at the last hurdle so he did well to finish fifth.

We had two runners here and Aquitaine Boywas first up with Rachael McDonald in the 2 mile Conditional Jockeys’ Handicap Hurdle.  The ground was rather too fast for such a big horse and the time quick but once again his jumping was superb and he finished seventh.   He would need further on that type of going and he will be much more suited to chasing so ideally we would like to find a Novice Handicap Chase for him next.

Beat Box ridden by Brian Hughes was in the 2 mile 3 ½ furlong Handicap Chase.  The ground was drying out by this time and this was a strong contest.   The pace was too strong for him and so Brian bided his time and as usual his jumping was brilliant.   He was just starting to get into the race when he was very badly hampered four out when two horses in front of him fell and so Brian wisely pulled him up.  The fact that he was able to skip nimbly over the two fallen horses showed he had plenty left and Brian is confident of his chances on this sort of ground over further.

We will report next week on the races from the 28th to 30th March and we have three runners at Carlisle on Saturday 3rd April.

Lord Roco ran in the 2 mile 1 furlong Bumper here with Rachael McDonald riding.   He came to us from Bryan Murphy who had produced Lord Wishes and we were well informed of the difficulties in breaking him in.   He is highly strung and has proved very challenging, so it was a real achievement to get him on to a racecourse!   He did have an anxious moment in the paddock but Rachael managed to get him to post safely.   When they jumped off he was very green and backing off the other horses until he settled into a nice rhythm in last place.   He did peck a few times on the very testing ground but then his class shone through and he ran on towards the end up the hill to finish sixth.  He will receive more practice at home upsides other horses and he can only progress from here.

We will report on Newcastle next week and we have three runners at Carlisle on Saturday 3rd April.

Wishing you all a very Happy Easter.