After the excellent start to the season it was frustrating to find that the horses were subsequently just not running up to expectations and therefore extensive tests were carried out and this was quickly traced to the feeding.   We have now changed the hard feed and there has been a marked improvement in performance on the track with two good winners last week and some very good placings.

The highlight of the week was Ascot de Bruyere recording his sixth win for us in impressive style at Newcastle.   Bowling along in front and never missing a beat, Brian Hughes gave him a brilliant ride and it was an absolute masterclass in jumping from both horse and jockey.

We are all deeply saddened by the death of Jim Gordon.   He was such a supporter of the yard from our very early days and always had at heart the best interests of his horses.  He was a true gentleman who had so many good horses with us resulting in trips to Aintree and Cheltenham and many courses in between.   Jim will be greatly missed. 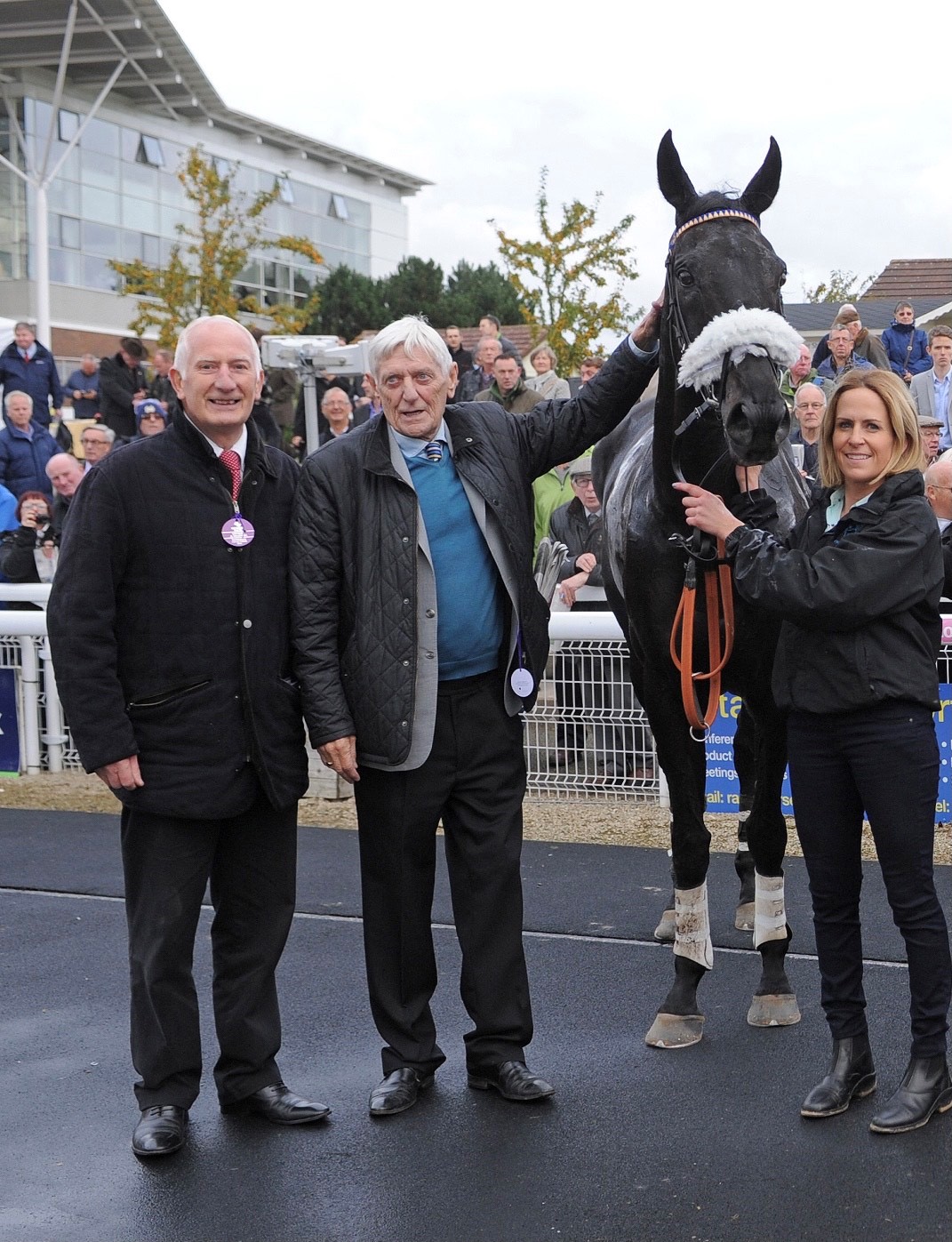 On Monday 30th November, James was part of the Racing Post Monday Jury giving his opinion on various topics along with well-known people from Jumps racing! 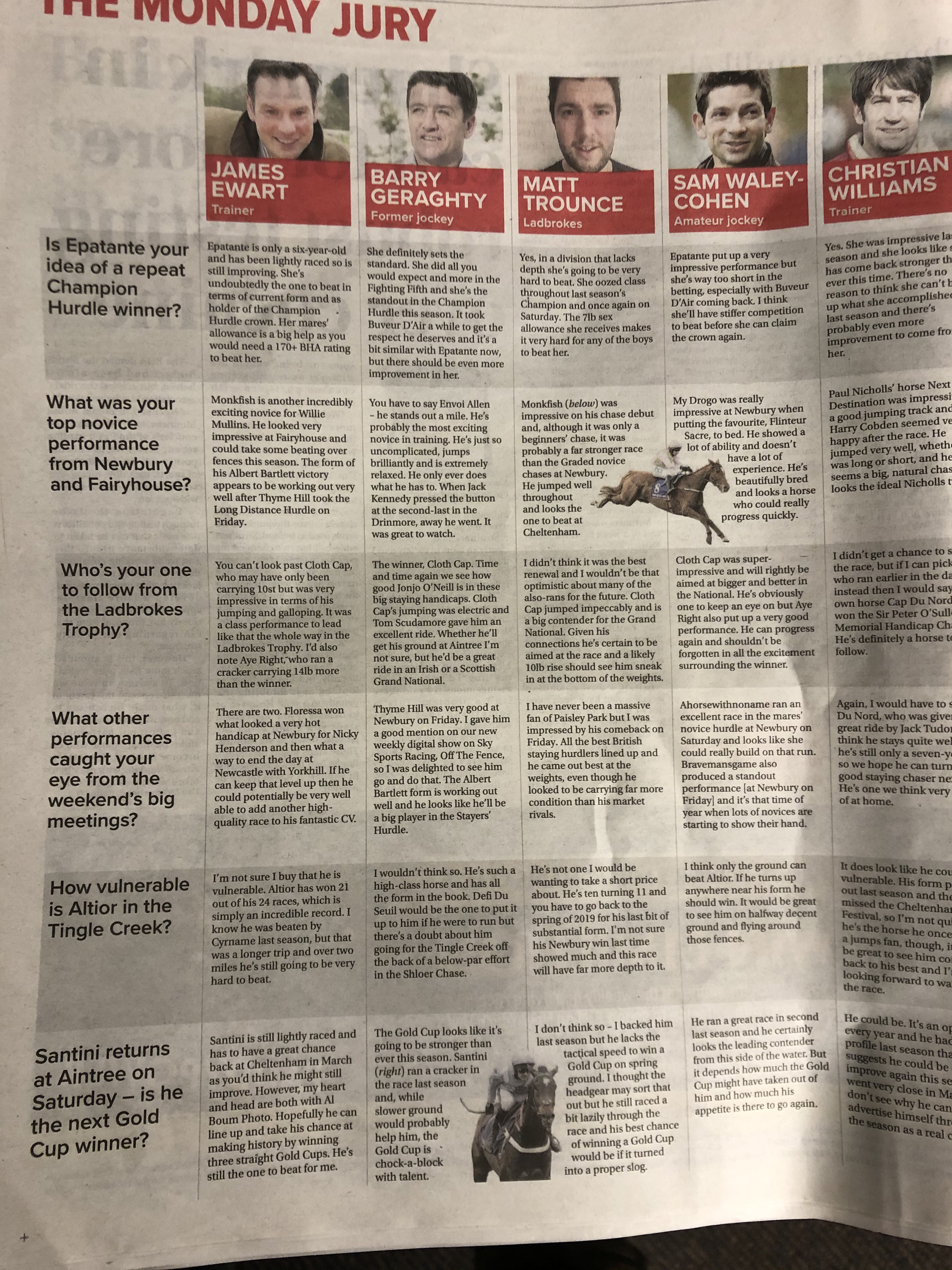 We have an exciting new horse coming to the yard.    Rocco - a four year old by Rocamadour was found for us by Bryan Murphy in Ireland who also produced Lord Wishes and Border Pastures.   Details will shortly be on the website. 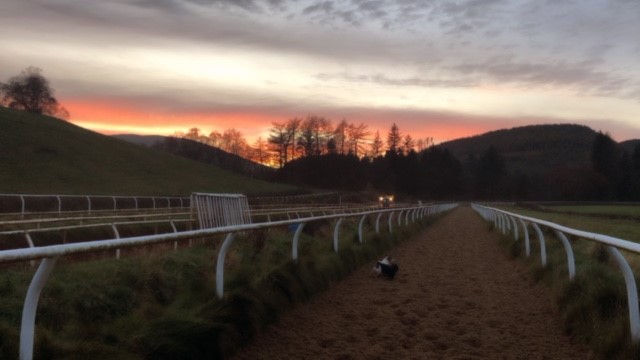 Sunset on the Tapeta

The Caretaker  (Danny McMenamin) won a Bumper in Ireland with Gordon Elliott and was having his first run for us in the 2 mile 1 furlong Maiden Hurdle.  He was hampered early on and also pulled a muscle in his girth area and did well to finish fifth out of twelve.  He is a talented four year old and will benefit from time taken with him now.

It was great to have Rachael McDonald back in saddle again on Cellar Vie in the same race.  This was his first run over hurdles and like all this family jumping is his strong point.   He did hang right but kept on galloping to finish seventh.

Brian Hughes rode Bluefortytwo in the 2 ½ mile Handicap Chase but he found the ground pretty testing and struggled up the hill second time round so maybe this distance is too far on this track.  He finished sixth.

Aquitaine Boy with Brian Hughes travelled well for a long way in the 2 ½ mile Maiden Hurdle but when he started to lose his position Brian wisely pulled him up.  He is a lovely long striding horse and is still young so will benefit from being brought on slowly.

For Three with Danny McMenamin ran a great race in the 1 mile 7 furlong Handicap Hurdle.  Coming round the last bend he was well in touch but then was very badly hampered by two horses falling in front of him and did well to stay on his feet.  In the circumstances he was brave to run on and finish third.

Beat Box is such a tough and genuine horse and still only four years old.   Brian Hughes wore a black arm band in memory of Jim Gordon in the 1 mile 7 furlong Novices Handicap Chase.  They were always going a little too fast for him but he was brave and his jumping improved as the race progressed over the stiff fences and we can now look for a race over a longer distance. 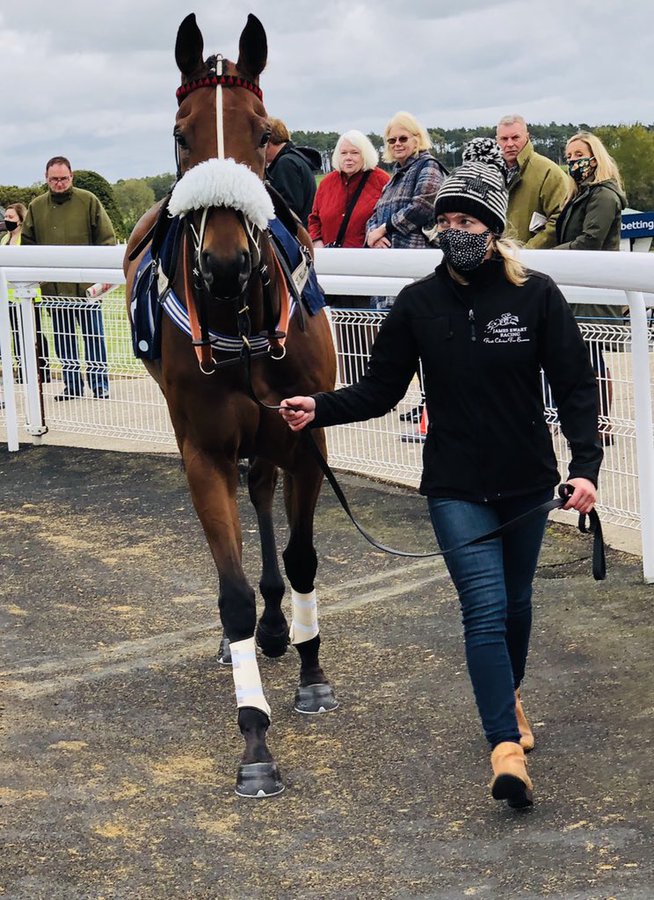 Beat Box with Gemma at Wetherby

At Doncaster it was becoming clear that the horses were really returning to form with two seconds and a third from four runners.

Rachael McDonald was pleased to be reunited with Lake Takapuna in the 2 mile Handicap Chase.   Together with the winner Carolines Charm they set off at a very strong gallop and there he stayed for most of the race.   In the end  he was just beaten  by the improving six year old trained by Neil Mulholland to finish second by four lengths but this was a great performance.

Honourary Gift (Danny McMenamin) who was in the same race seems to have rather lost his confidence since his very good first run over fences at the beginning of the season.    However, after jumping rather big and slowly at first, his jumping improved as the race progressed but they were always going too quickly for him.

Brian Hughes was back on Nikgarde for the 2 mile 4 furlong Novices Hurdle which was a very high class race but we were keen to run him on the really good going.   He jumped superbly and was always in contention but slightly felt the pressure when they quickened up turning in.   However, he ran on gamely to the line and was only beaten two lengths by the odds on favourite Bobshopeornohope trained by Kim Bailey with Santon trained by Alan King in second  place so this was his best performance to date and we are delighted with him.

Empire de Maulde  ridden by Rachael McDonald jumped off in mid division in the 2 mile 7 furlong Novices Handicap Chase.  As he was settled towards the rear, his jumping was good and straight and he was in a lovely rhythm for most of the first circuit.   He then took closer order and was produced perfectly by Rachael after the last only to be caught close home by Enry Iggins  beaten by a short head in a very exciting finish.   This was a great result and Empire is still only a six year old so plenty to look forward to.

Ascot de Bruyere was back at his favourite track in the 2 ½ mile Handicap Chase and showed this by winning in the hands of Brian Hughes.  Brian was asked to be positive and Ascot’s superb jumping put all the others under pressure as he led from start to finish to win by 18 lengths.  It was a delight to watch as he recorded his fourth win at the track. 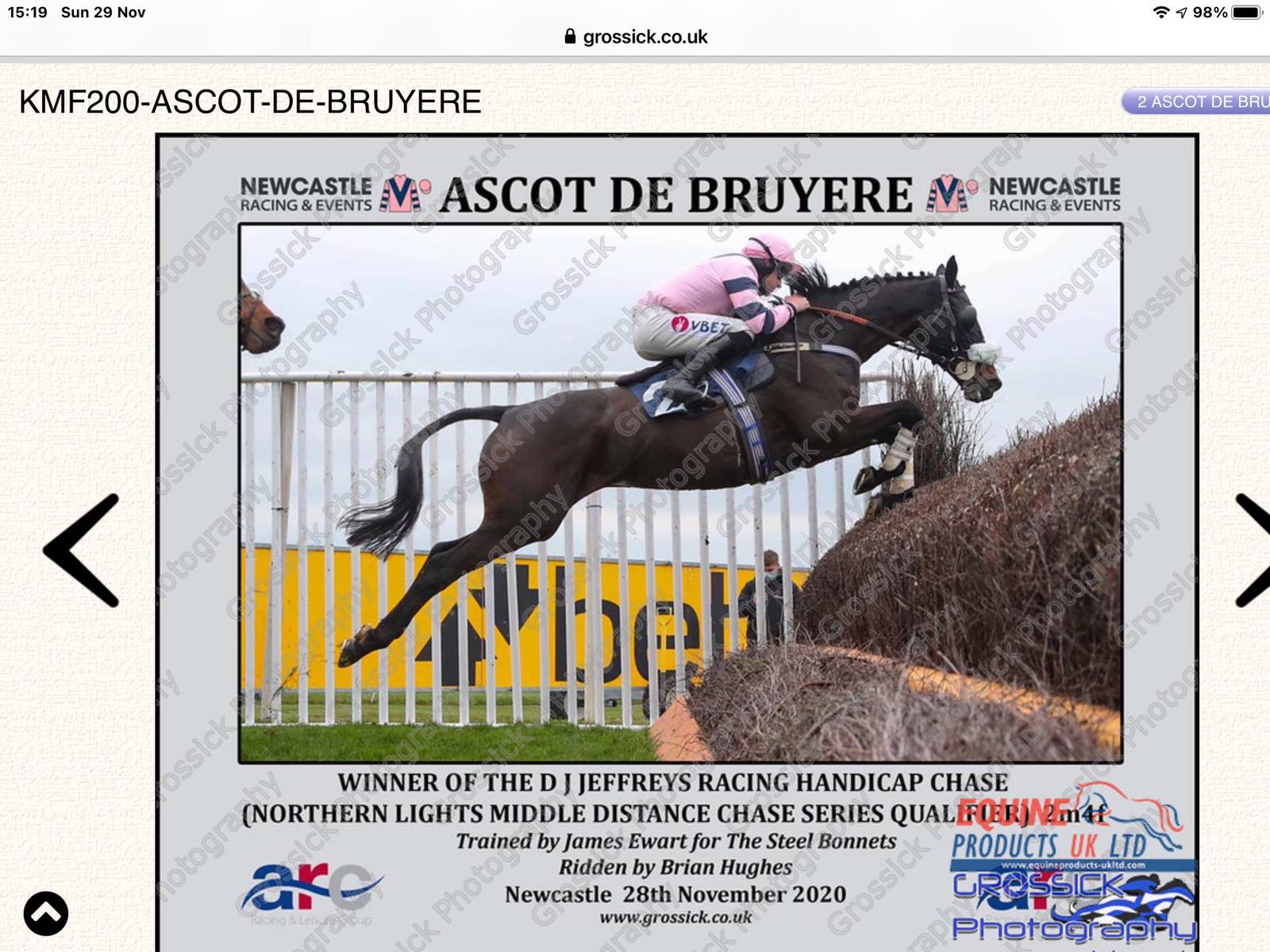 We had another great result with Fostered Phil (Rachael McDonald) winning the 2 mile Novices Hurdle.   Rachael settled him nicely and his jumping was quick and neat apart from one slight mistake at the 3rd last.   When asked he quickened decisively to win going away by 4 ¼ lengths and beating some fancied horses.   This was only his sixth start and was an impressive performance. 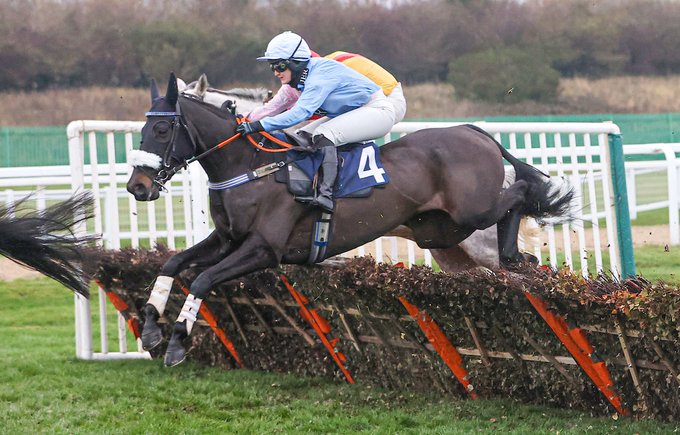 Charmant with Brian Hughes ran in the 2 mile 7 furlong Listed Rehearsal Chase and did not have the best of luck.  Run at a strong gallop, Brian settled Charmant at the back and was happy with him until he was very badly hampered at the 11th fence when two horses fell in front of him.   He was  extremely clever to stand up at all as he dodged round the side of the fallen horses and finished seventh.   Brian felt he still had plenty left in the tank when he had to take such decisive evasive action and without this interruption would probably have been placed.

Ettila de Sivola travelled down to Bangor on the same day to run in the 2 ¼ mile Handicap Chase.   However, he was not himself at all and did not want to go into the paddock and was never travelling in the race and so Fergus Gregory wisely pulled him up.  We are testing thoroughly and will get him right before running again on a flat galloping track.

Aristo du Plessis was ridden by Alison Johnson in the 2 mile Handicap Hurdle but the race did not go according to plan as Aristo and the favourite set off at a blistering pace which cost both of them their chances and he was then badly hampered on the inside so this was not his day.  However, he still loves his racing and his handicap has now dropped to 118 so this will be a help for future races.

Cellar Vie with Brian Hughes was out again in the 2 mile Maiden Hurdle.   Again jumping was his forte but he struggled to maintain his position once they quickened up and so we will obtain a handicap mark next time out and then send him chasing.

We will report on Musselburgh on Monday 7th December in the next blog and have entries coming up at Hexham, Newcastle, Doncaster and Carlisle.