This is a very exciting time of year as the horses near race fitness and the young ones continue with their jumping education.   At a recent schooling session, Civil Unrest, who is in great form, was used as the lead horse for Charmant and Calix Delafayette both of whom will be going chasing this season. Charmant was particularly impressive and Aristo du Plessis was supremely slick over the hurdles.   It will be very good to have him back again.   For such a big horse Into the Breach performed very well over the tyres and he will be going Novice Hurdling.

It is not just all about the racehorses.    For over 60 years Neil’s family have been breeding Fell ponies and two of them live at Craig and as reported in a previous blog, they took part in the local Border Ridings.   At the Langholm Show on the 22nd September, Acreknowe Goldfinch covered herself in glory by winning Champion in Hand, Reserve Champion Ridden and Reserve Champion Horse in Show.   As you can see from the photos, Briony turned her out superbly and she even had her mane specially prepared the night before.   To cap a highly successful day for the yard Sarah Poole’s horse Rupert was Champion Horse in Show.   Sarah has the key – and often hazardous – responsibility for all the clipping in the yard.   Not to be outdone, Briony’s Paddy was best terrier at Bentpath Show.

Other yard news.   Sarah Wilson has been building jumps all over the farm in preparation for the working hunter Show on Sunday 21st October.   She will compete on her three year old pony Rocky whom she has produced beautifully all by herself, so we wish her luck. 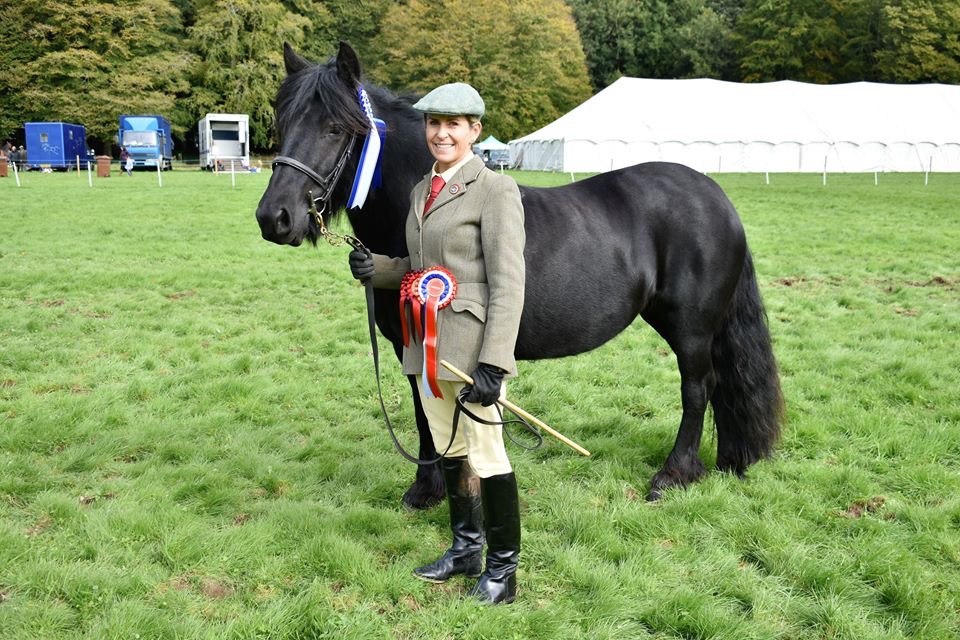 We were sorry to hear that Sam Morshead died on the 26th September after a long battle with cancer.   Following a successful career as a jump jockey, Sam came into his own after he retired and turned to racecourse management. As Clerk of the Course and then General Manager, he was responsible for really putting Perth on the map and making it one of the most popular and welcoming racecourses. He encouraged southern and Irish trainers to send horses north of the border and made sure they had a good time with plenty of entertainment after racing. It is a testament to this foresight that his legacy remains and Perth continues to be a very popular and fun racecourse.

We had a tragic day at Hexham on Saturday 13th October when Calach had to be put down following a very serious tendon injury. This promising young horse had won his previous hurdle race and so his career was all too short. Events like this are devastating for the whole yard but in particular our thoughts are with his owners and those who rode and looked after him.

However, we have to continue and look to the future and we have plenty of entries over the next few weeks including Wetherby, Carlisle, Market Rasen, Sedgefield, Kelso and Ayr.

Once the season is underway we will be resuming the weekly blogs so please keep a lookout for these.