Happy (late) New Year - apologies my secretary has been away so a bit slow with an update!

Nice to have another couple of winners since Christmas with Un Guet Apen’s and Civil Unrest (4 time winner this season)- Civil and our yard Conditional Dale seem to making quite the pairing! 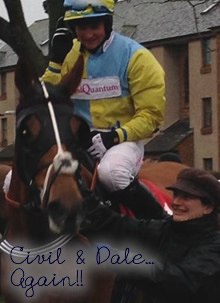 We have Captain Americo running for Dennis Coppola and Melua Maid for the boss #2 at Alnwick on Sunday and hopefully we will see Zaru head to his favourite Newcastle today.

It seems the weather is starting to play with my diary... Again! Was most disappointed that Kelso ended up being abandoned as was really looking forward to seeing Roc De Prince in action (He is a favourite of mine).

Last week was eventful despite not having much racing on as I managed to pull a crafty one. I was allowed on a Tesco shop and once all the bags were safely in the car I climbed over the dog guard, unfortunately I accidently locked the doors with my two friends Booty and Saly in with me. Thankfully I hit the hazard lights to alert anyone that we would need let out after a good feast... Thought I was being very helpful but the AA had to come out as we had not realised the spare set of keys were also in the car!! Oh well they were out within the hour so can't complain just enough time to sample everything...Mum was not happy with me at all, I was even named and shamed on Facebook afterwards! 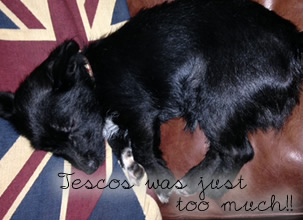 Tax Benefit is back in training with us, everyone seems really pleased! Also some nice newcomers as well which we will update on the website next week so keep a look out. 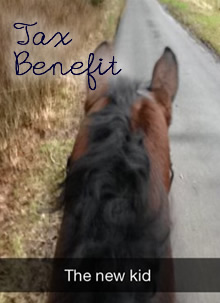 New pink and black Morag jackets selling well so look out for them on course! You can also contact the office if you would like to buy one, check them out http://www.jamesewartracing.com/merchandise.html