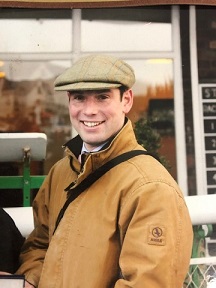 James Ewart Racing Ltd was founded in 2004 as a Flat and National Hunt racing yard: initially buying and selling French horses to U.K. owners whilst establishing training facilities. Amongst his early purchases were Dark Ben and My Way de Solzen.   James has particularly strong links with France resulting in a high proportion of French horses in the yard but has also had great success with Irish and English horses.   He has trained multiple Bumper, Hurdle and Chase winners with some horses winning 12 times and he is always striving to improve the quality of his string.

James was brought up around horses all his life and as a child enjoyed jumping large hedges on small ponies in the Wynnstay country!   Teenage stints followed with work experience at Nicky Henderson, John Leadbetter and Jonjo O’Neill followed by a course at the Royal Agricultural College studying Land Management. Then on to Ferdy Murphy for three years as Amateur Assistant and over to France for four years with Guillaume Macaire as Assistant Trainer - some highlights being Champion Amateur Jockey 2000 and taking Jair du Cochet on his UK raids.

At the Royal Agricultural College (now University) she met James and spent a summer in France with Guillaume Macaire before working for two years at the Shadwell Stud and in 2004 helped James set up James Ewart Racing.   She has been responsible for breaking in and producing many winners including Wilde Pastures, Open De L’Isle and Capital Venture. Briony still continues with breaking in, is a regular work rider and helps with the horses at the races.   As a hobby she enjoys competing on Neil Ewart’s homebred Fells whose bloodlines go back 60 years.

David has spent a lifetime in racing and has worked at Newmarket and at Middleham with Mark Johnston. He has a wealth of experience in all aspects of horse management and their wellbeing and is a vital member of the team.

Chloe Aitken  (Ground Staff) - Chloe originally came to us to ride Sa Suffit's shetland companion, Blackie and has now rejoined us and looks after one of the barns.  She is looking forward to going to The British Racing School next year.

Amy Elliot (Part time) - Amy has joined the excellent new Scottish Racing Academy programme and will have two days per week at Borders College and the remainder working in the stables.

Rosie Ford (Work Rider) - Rosie is a Cirencester graduate who is an accomplished rider and is experienced in eventing, hunting and breaking

Steven Fox (Work Rider) - Steven has been with us since 2017 and is a skilled horseman who has ridden lots of winners for the yard and is a valuable member of the team.

Sarah Poole (Senior Staff) – Sarah is an excellent and accomplished horsewoman who is now  riding out full time and in charge of the travelling.